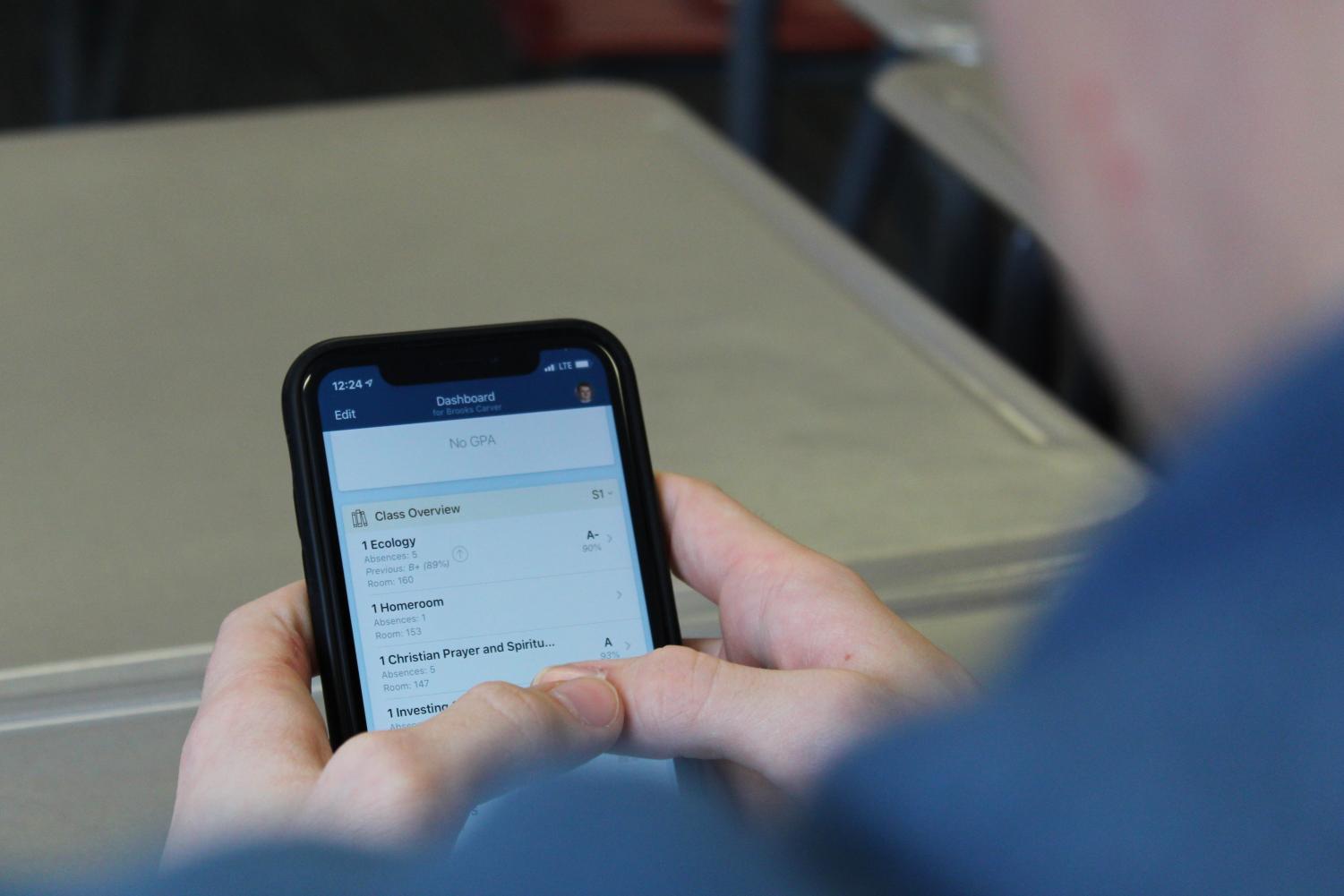 BSM student checks Powerschool to see how much their finals affected their grade. (Jack Shields)

BSM student checks Powerschool to see how much their finals affected their grade.

Finals: how much of an impact should they have on your grade

Finals should be a greater percentage of the final grade

Towards the end of the semester, a small boost in a student’s grade might be enough to change their B+ to an A-. When I’ve sat on the edge of a letter grade, I relied on my final to give me the extra points necessary to push my grade up a letter. However, there have been some classes where my final, only worth a small fraction of my grade, wouldn’t have done much to change my grade (that is, unless I failed the exam). A 100% on the test may not have even moved my grade up in the class by one point. This seems unfair to those students who study for hours for a final, hoping that it can give them the extra boost they need in their grade, only to do well and barely see their grade change.

A larger percentage for the final also encourages students to learn the information throughout the year, instead of memorizing the information for each test and then forgetting it after.”

Because of the benefits of a larger final exam or project, a final test’s percentage should be 10-15% of the final grade. The final is then a larger part of the course, and a way to really gauge how much the students have learned throughout the semester. Not only would this provide the teachers a way to test their students in a more effective matter, the students may feel an incentive to prepare for the final more than if it were only 5% or less of the final grade. When I know that my final won’t have much effect on my grade, I will spend less time on it, even if there is a lot of valuable information that I could learn from it. A larger percentage for the final also encourages students to learn the information throughout the year, instead of memorizing the information for each test and then forgetting it after. Knowing that there will be a hefty final exam at the end of the semester, a student may focus more on understanding what they are learning, resulting in a deeper knowledge of the subject.

Although a large final exam may cause a student’s grade to drop if they don’t do well on it, more often than not, if a student has been learning the class’s information throughout the semester and puts a lot of time into studying for the final exam, they should be pleased with their results on the final.

Why? Because most finals are more than 10% of a class grade, causing them to have a bigger impact for better or worse. It’s a nightmare, especially if a student struggles taking tests in general.

Most students spend countless days preparing for finals, but just one single day can affect all of those days, giving no significance to all of that hard work. On top of that, studying for finals can really affect a student’s mental health.

Finals week makes students less intelligent; they study countless things throughout one semester, then before they know it they’re panicking because finals are coming up. Students try to remember everything they have learned throughout the year but eventually, the mind overflows until it malfunctions, causing more stress and less creative thinking. Therefore, students come out of finals week braindead, lost, and less intelligent. It’s just really not helpful for students because that’s not how the real world works. Some say it’s a great chance to learn and improve grades, which is true, but all the work put in for months shouldn’t be greatly affected by one day. Therefore, making finals no more than 5% removes a huge weight of stress on the student.

Finals cover everything learned from that semester, but who really remembers everything they have learned? Making finals no more than 5% can be a compromise for both sides; it is still a bigger percentage towards a student’s grade and may boost it, but also it won’t have a big impact on the students that don’t do as well.

Pushing for finals to be around 10%-15% just isn’t a logical compromise, at least for the majority of students. Students would be stressing twice as much about the exams at the end of the course, which totally takes away a student’s ability to be creative. Many students are already dealing with extracurricular activities and things going on in their personal lives. As of right now, finals week means there is no time to do something they are passionate about, or a hobby they are interested in. Students will be traveling solo after they graduate, being totally responsible for themselves. It’s critical that they discover just how capable they are of reaching anything they desire. Truly, making finals no more than 5% of a student’s grade could show the unknown of a student’s ability.