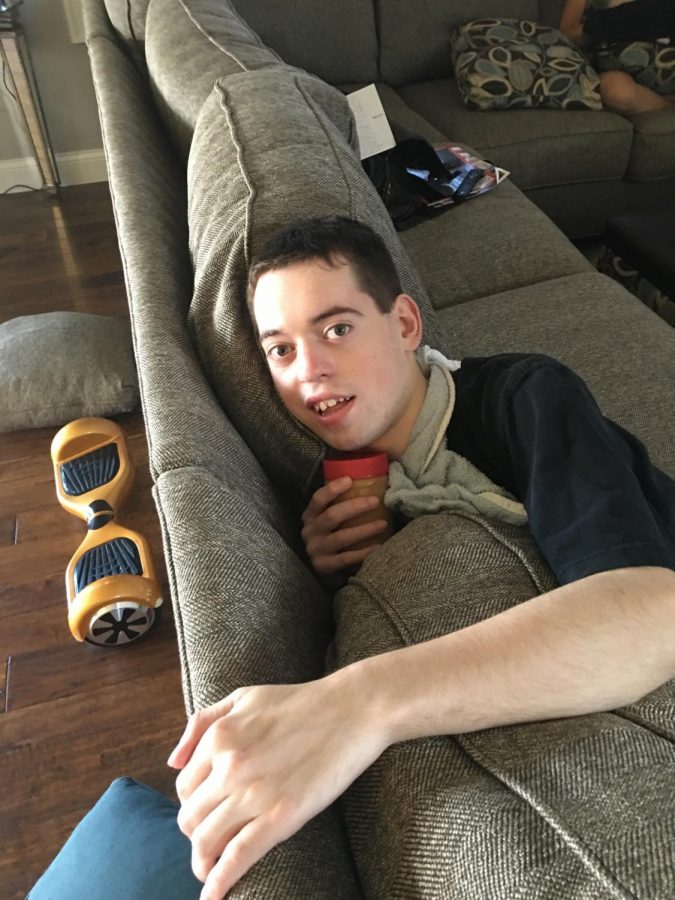 Noah’s brother Porter has autism and Down syndrome.

Screams of “call 9-11” fill the air at our local community center pool. I float gently with only my eyes above water, watching the blood unremittingly gush from my brother Porter’s head. The water muffles the wailing enough to make it impossible to distinguish which came from his lips or distraught onlookers. The Grand Mal seizure would not relinquish its grip on his muscles until he was deposited in the ambulance.

Porter would flat line twice that day, leaving us with nothing but waning hope in an all too familiar corner of the ICU. While life sings lullabies to some, it spins tornadoes for others. Porter had won this tragic lottery and, after being born normal, had a disastrous reaction to his Pertussis vaccine that triggered a chromosomal shift, leading to autism and Down syndrome. The potential for the most basic of childhoods was rattled. Birthday parties not experienced, no first kiss, no children of his own, and no original thoughts. My older brother, responsible for guiding me on life’s grand path, was reduced to a breathing carcass.

Everyone close to Porter dealt with his conditions in different ways. My mother turned to the bottle and gently numbed her mind to its existential agony. I ponder on Porter’s life itself and entertain the idea that he’s more aware than we could ever know, but little evidence supports my theories.

“Compensation” is an interesting word for a supposed consolation of a life thwarted early, but that is what we received. Our whole family descended on Atlanta, Georgia, and fought in the National Vaccine Court, winning against the CDC. The opposing counsel conceded that Porter was, in fact, eternally damaged by their treatments, and a healthy sum promptly was dumped in a new monitored account for Porter’s future medical needs. Do not misunderstand me however––none of this information was shared in a public sense––thereby leaving my family (and specifically me through brotherly honor) on a social precipice.

The hardest decision of my life was forged in those courtrooms whilst I was in diapers, which, coincidentally, Porter still wears. I knew that, with his soul omitted from the world’s sphere, my brother needed a voice. In that same process of thought, one cannot deny the dangers of advocacy. I will never forget Porter, but society will, and if I forever etch him into their minds, I may cause parents to refuse vaccination as a whole.

I want everyone to know Porter. He is my brother, and I love him dearly. ”

Through hours of deliberation, I made the decision that those who have no voice deserve one. On television shows across the country along with an armada of online articles written, Porter’s story will be shared, even if his own mouth isn’t capable. I told Porter of my plan to spread the word one afternoon on the porch of his group home. A choir of robins and blue jays began their next hymn as I finished my explanation. A slow but conscious smile enveloped his face. There’s an equal chance he was smiling about his favorite Winnie the Pooh episode or a scene from Pocahontas (his favorite two programs), but I sincerely hope he appreciated my intentions.

I will not stop fighting for Porter, and he will never stop fighting for himself. I do not desire that any family cancel their plans of vaccination, nor avert their gazes when Porter is near. I simply wish for all to be aware of and honest about life’s dazzling turbulence, its lilac meadows, and its graveyards. I want everyone to know Porter. He is my brother and I love him dearly.