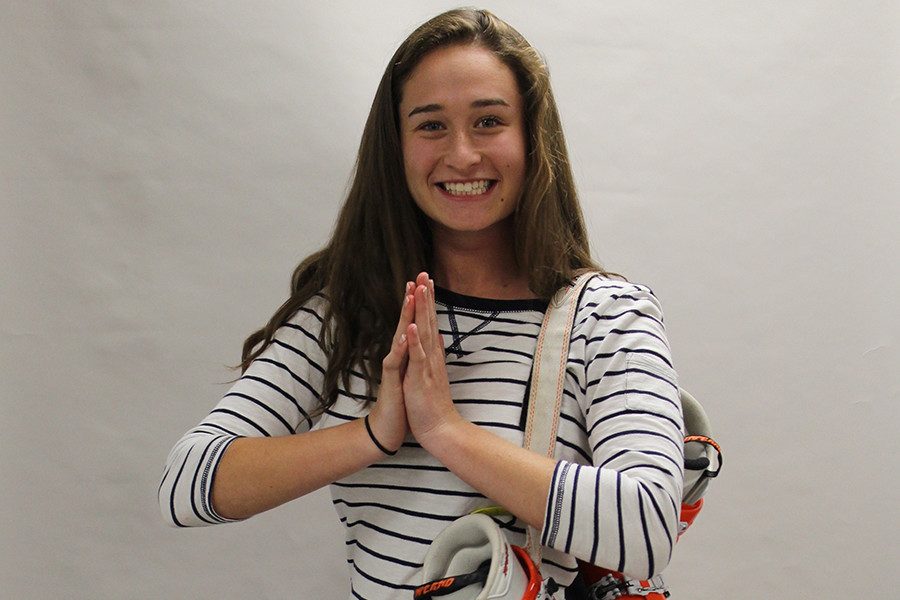 Jaime Dritz is captain of the Alpine ski team.

“Jaime always has a smile on her face. She has a happy, free-spirited nature and is non-judgmental.” -Ms. Nicole Rassmussen

There is no single specific thing that makes Jaime Dritz tremendous. Jaime is a compilation of a million memorable elements that form a comprehensively extraordinary person. Of course, she excels as a skier and a softball player; however she is truly tremendous because of all the minute details that are mentioned casually in conversation.

Any description of Jaime needs to begin with her chief passion: her dogs. Charlie is a golden retriever, and Stella is an 11-month-old Bernese mountain dog weighing in at 95 pounds. “Stella is the only person I hang out with,” Jaime said. The enormous puppy often bulldozes her owner and wakes her up by barking in her face, but Jaime doesn’t mind. Her love for her dogs runs deep. “I watched ‘Marley and Me’ yesterday, and I bawled into my dog because I didn’t want her to die,” Jaime said.

+ If she were a meal, Jaime would be Penne Rosa from Noodles & Co., but without veggies.

+ She is a captain of two sports.

While her heart may belong to her dogs, it cannot be overlooked that Jaime is an incredible athlete. She first clipped into downhill skis at the age of two and follows behind two older siblings who are also elite skiers. “[Skiing] is a great family sport that we all do together,” Jaime said.

She represented BSM at the state Alpine ski meet as both a seventh grader and then again as a sophomore. She won an All Conference award and Coach’s Award this past season. In the spring, Jaime leads the varsity softball team as a captain and was named the team’s most valuable defensive player her junior season. Jaime not only excels competitively, but she is a role model for all her teammates. “Jaime is always fun to be around, but is responsible at the same time. She’s an insanely fast skier, so that’s tremendously cool to watch,” senior Kate Murnane, Jaime’s Alpine ski team co-captain, said.

Although not quite as widely known as her athletic achievements, from age eight to about eighth grade, Jaime aspired to become a farmer. Despite living in suburban Chanhassen, Jaime grew up with a passion for rural pastures, but the dream fizzled out due to infeasibility. “That dream has long passed. I realized I probably wouldn’t be a good farmer because I don’t like to get up early,” Jaime said.

Lack of resources proved another barrier to her dreams. “I have no land; you have to have land to be a farmer,” Jaime said. Instead of studying agriculture at Iowa State University as she dreamed she would throughout her childhood, Jaime will attend nursing school at Creighton University in Omaha, Nebraska next year. “I still low key want to be a farmer, though,” Jaime said.

In ten years, Jaime hopes to have a job in nursing and own at least three dogs. “My ideal dog is a 140 pound boy Bernese mountain dog. I want the biggest dog I can get,” Jaime said. However, don’t count farming out for her yet. To this day, her celebrity crush remains Chris Soules—a contestant from “The Bachelor” who is a farmer. Even so, Jaime tries not to limit herself with concrete ideas for the future. “I’ll live wherever. I’m a pretty open person…I don’t really plan my life ahead, because I live in the moment,” Jaime said.

One conversation with Jaime can include topics ranging from the 2008 film “Marley and Me” starring Owen Wilson to the definition of a leek (it’s the larger version of a green onion) to the customized Yamakas that she has left over from her bat mitzvah five years ago. “I just say things. I need a filter,” Jaime said. However, it’s these anecdotes and details that make an encounter with Jaime the highlight of any day. A person could learn something new about Jaime Dritz every single day and never get bored.