Perspectives on the wage gap

The wage gap is a divisive issue in today's political sphere. Two of our writers take on the argument.

The wage gap is serious and should be addressed

In this day and age, both men and women enter the working world with wide eyes and hopes of attaining wealth and maintaining a healthy standard of living. Whether they come from an Ivy League school or enter the working world with only a GED, there are jobs made for every caliber of education and skill. However, there is a dark side to the promising future of recent graduates: the wage gap.

The wage gap is a tricky land mine of a topic, so before I dive into the controversy I would like to clarify my intentions and point of view. I don’t care about the semantics of 79 cents to 81 cents; in my opinion it goes beyond that. Furthermore, this is my opinion and has been based off of my experiences and observed experiences of others.

Studies show that a woman must be 125% more qualified than a man to earn the same job. ”

With that out of the way, allow me to make myself clear: if two people are doing the same or similar job with the same level of efficiency, their salary should not differ based on gender identity, sex or anything besides how they work. All of these are irrelevant factors in how one will work and how they should be paid. This discrimination is not only morally unacceptable but also illegal, as presented in the Civil Rights Act of 1964 (Title VII), which prohibits employment discrimination based on race, color, religion, sex, or national origin.

Some may argue that the wage gap does not exist or that it doesn’t exist to the severity that it has been claimed. But in my opinion, the severity is not the issue. If for any reason a person is truly having their salary determined by their gender it is illegal. The Civil Rights Act is not the only order in place to attempt to end discrimination in the work force. Many laws and acts have been passed in order to attain equal rights and fair treatment; for example, Equal Pay Act of 1963, Additional Provisions of Equality of Equal Pay Act of 1963 and the Equal Pay and Compensation Discrimination Laws.

Furthermore, some critics of the wage gap claim that the reason for the wage gap is job placement and the lower paying jobs that women choose. Age-old gender roles that show women as the caregiver and men as the breadwinner are still instilled in to- day’s society. Women are naturally pushed by society and towards lower-paying jobs such as teachers or care providers whereas men are urged towards higher paying jobs like business executives or engineers. To reinforce this issue with statistics, out of all the Fortune 500 companies only 50 have female CEOs. What is even worse is that there are more companies run by a man named John than there are companies run by a woman. This cannot be attributed to simple lack of preference or choice made by women; it is the clear lacking of acceptance of females in the hierarchy of the working world.

To put salt in the wound, purely getting hired in the first place is harder for a woman. Studies show that a woman must be 125% more qualified than a man to earn the same job. The American Association of University Women (AAUW) finds that in STEM fields men are not only more likely to be chosen for a job, but also receive a higher starting salary, to be rated as higher performing, and to be given a promotion or raise over a woman with the exact same qualifications.

The wage gap is not only enforced by a general discrimination of women, but also by company worries about possible time and money lost from a woman’s maternity leave. The Pregnancy Discrimination Act forbids any business from questioning women about future children or past experiences with children. Despite this act, many women are still questioned about their personal life choices in interviews in order for the company to assess how much they will lose during a woman’s maternity leave. For example, women will often spend four years without working while being a stay at home mom and will have a gaping hole on her resume that will face scrutiny, whereas a male counterpart will oftentimes not have this hole as they are less likely or encouraged to take time off after having a child. This obvious sign of enforced gender roles and sexism occurs on the daily.

At the end of the day, this is not simply about the twenty some cents. The presence of a gap at all is morally wrong and illegal. I find this discrepancy in pay and blatant sexism deeply disturbing and hope that one day, if we all keep fighting, the gap will close.

A commonly cited statistic is that, on average, women are paid about 75 cents for every dollar that a man makes. This leads many to draw the conclusion that a male and female worker doing the exact same work with the exact same credentials will be paid differently because of sexual discrimination. Though the statistic itself is not a lie, it is misleading and leads people to draw the conclusion that this gender pay gap is purely a result of sexual discrimination in the workplace, which is not the case.

First, let’s look at the statistic itself. According to a video by George Mason University’s Learn Liberty Project, the wage gap statistic is constructed by adding up all of the incomes of women and dividing it by the number of women in the labor force, while doing the same thing for men. If you do this, you will find that, on average, women make about about 75% of what men make. However, this statistic says nothing about pay differences for doing the same work, so if women aren’t being discriminated against because of their gender, what factors contribute to this large gap? One of the main reasons that men and women make different wages is because of different investments in their skills and education.

First, field choice has a huge impact on wages. Men tend to go into fields like engineering and computer science, which pay much more than fields like education and health that are more likely to employ women. Regardless of gender, an engineer is most likely going to be paid more than an educator.

Time spent on the job also plays a role. Learn Liberty cites that women are twice as likely to work part-time as men and in general part-time workers will be paid less than full-time workers. In addition to this, Carrie Lucas of the Wall Street Journal cites that the average full-time working woman works about 8.01 hours a week, while the average full time working man works about 8.75 hours. Logically, someone who works longer hours would probably make more.

In addition, Steve Tobak on CBS’ Moneywatch cites that men are more likely to work in the evenings, on weekends, or in locations that are undesirable and isolated. Companies normally pay workers more to make these undesirable positions more appealing to workers.

One area that directly affects how much money workers make are their motivations for work. According to bestselling author Marty Nemko, a Rochester Institute of Technology study found that the pay gap between male and female business owners (which is over 50%) can largely be attributed to motivations. The study found that money was the primary motivator for 76% of men, and only 29% of women, and as wages of people who are their own boss are independent of discrimination, this can be seen as a leading factor in this gap between business owners. 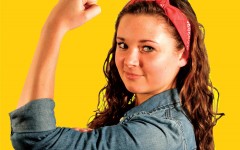 The importance of feminism can't be ignored

Women and men also spend their time as a whole differently, the biggest difference being time spent with children, which affects wages. A good example would be my parents. Joel and Karen Latterell are both accountants by trade, and actually met while working at the same position at United Healthcare. When they met, their wages were identical; today, Joel makes much more than Karen. Why? In 2003 Karen put her career on hold to raise four children, and didn’t re-enter the labor force for nearly ten years. While Karen’s role in the family was just as important and challenging as Joel’s, the fact that Joel was constantly working contributed to the fact that he was promoted to a managerial position, and given a higher wage. Upon returning to work after raising the children, Karen had to start where she left off.

These and other factors contribute to the wage gap, which Learn Liberty says almost completely disappears when these factors are controlled for. The fact is, women and men with the same characteristics are going to make more or less the same amount of money; sex does not play a role.

Rather, sex plays a large role in what people want from their lives, which influences their decisions regarding work. The decisions that men and women make about their careers, not sexism, are the main factors in determining pay. Overall, the statement “women make 77 cents for every dollar a man makes for doing the exact same job” is not only intentionally misleading, but also untrue.

Perspectives on the wage gap