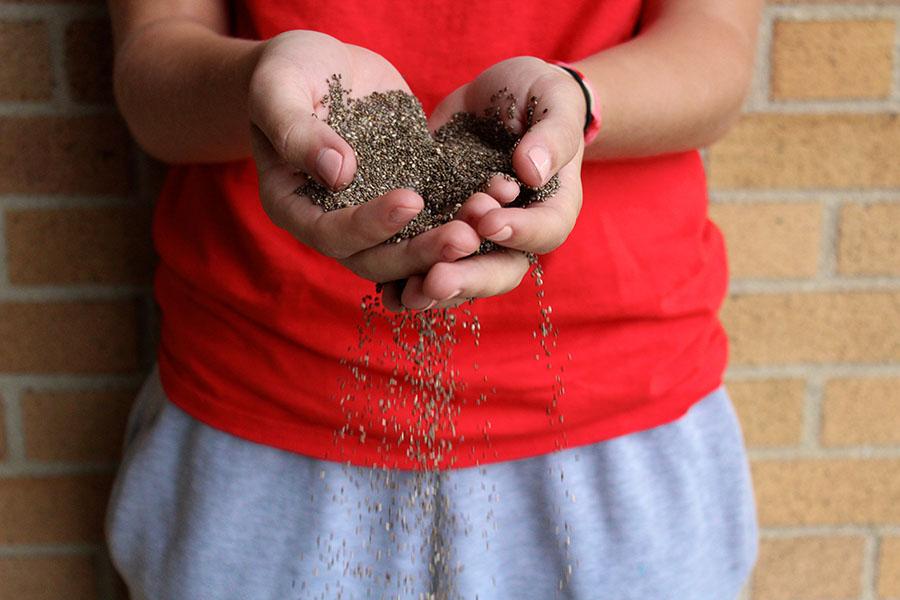 Many remember Chia Seeds as the main component of Chia Pets. Little did they know, it would become one of the trendiest super foods. (Alexis Hoedeman)

Many remember Chia Seeds as the main component of Chia Pets. Little did they know, it would become one of the trendiest super foods.

Before there were chia pets…

Although chia seeds commonly appear in granola bars and juices on supermarket shelves as the new health fad, this ancient seed has been harvested and used since the times of the Mayans and Aztecs.

Some people are uneasy with the fact that chia seeds are the same green sprouts on ch-ch-ch-chia pets, but these small seeds provide a variety of nutrients while maintaining a low calorie count. “The thought of eating the same kind of seeds used for chia pets is gross,” junior Betsy Cawood, unaware of the hidden benefits in chia seeds, said.

Today, most chia seeds come from Australia, Mexico, and South America. For many years, the people in these areas have grown them for numerous health benefits including fiber, protein, antioxidants, and minerals, like calcium.

One of chia seeds’ numerous health benefits is the high levels of omega-3 and omega-6 fatty acids, which amounts to more than its superfood competitors such as salmon and flax seeds. Omega-3 acids improve brain, heart, and skin health. When your body is metabolizing food smoothly with enough hydration, the toxins that might slow your body down are flushed away. This seed acts as roughage, keeping food moving through your digestive system smoothly. The gel formed by the soluble fibers of the seeds keeps the large intestine hydrated.

Unlike flax, these seeds don’t need to be ground up to be consumed; they can be used in baking recipes as an egg substitute (one tablespoon of ground chia mixed with three tablespoons of water instead of one egg), or they can be added directly into granola bars, ground into a flour like substance, or liquidized to create a gel-like consistency.

It has become a trend among many high school students to put chia seeds in their morning smoothies or in their water bottle for the day.

Junior Haley Ochs uses chia seeds in many of her recipes for added health benefits and their thickening texture. “When you put chia into the water, it thickens into a gel around the seed. So you add the chia seed to water and then add it to a smoothie or just directly into the smoothie. I eat them for the health benefits; it’s an easy way to get antioxidants and proteins,” Ochs said.

Senior Peri Warren, creator of the new Food Justice Club that promotes healthy eating and lifestyle choices, also incorporates this super food into her diet. “I eat chia seeds because they support brain function by aiding in focus and they are high in omega 3’s which contribute to the health of other organs,” Warren said.

Senior Parker Breza relies on these seeds to maintain a balanced diet. “Chia seeds are a great superfood. The reason why they’re so good is that they are the only natural substances that is high in omega-6 and omega-3’s, which are important for vegetarians and vegans. I make a chia pudding by taking juice and bloomed chia seeds. I put them in water or liquid, open up their gel, and eat it as a pudding like that,” Breza said.

Now that many people are finding this super food to be a staple in their diet, determining its portion size is crucial. According to nutritionist Drew Rosen in an ABC News article, researchers have found that eating about two tablespoons, or about one ounce, is the recommended daily amount so that the high fiber doesn’t cause an upset stomach.

In just a few years these seeds have gone from chia pets to our mouths as a superfood that are full of health benefits. Even though these seeds are a new addition to many people’s diets, Rob Nelson believes that there is nothing new about this trend. “They’re just seeds. Birds eat them, squirrels eat them, and humans eat them too,” Mr. Nelson said.