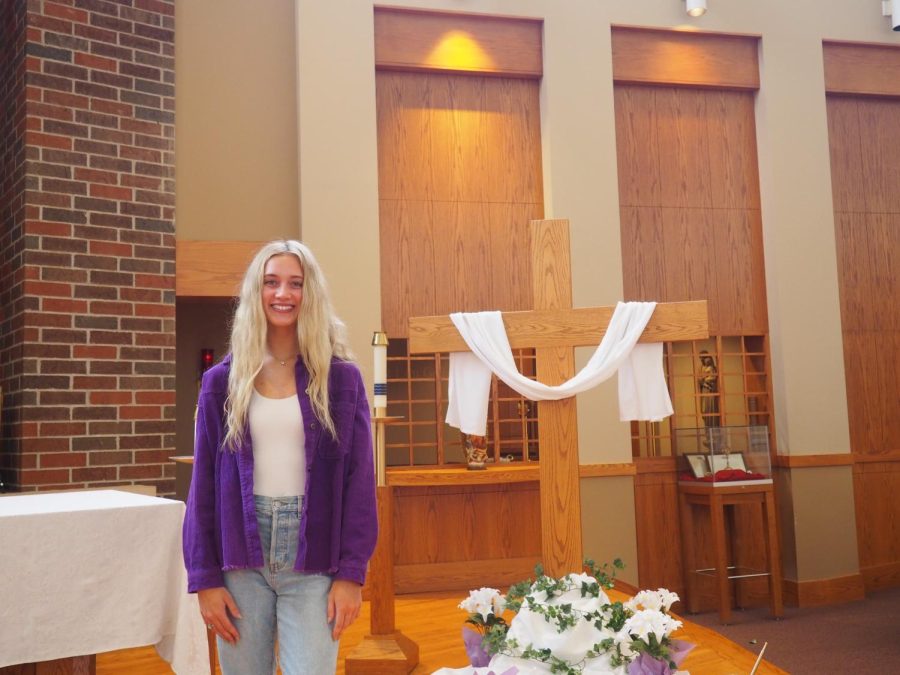 Going into her freshman year at BSM, Ava Montpetit was not concerned about being a Salutatorian. After four years of hard work and dedication, she finds herself standing at the near top of her class with a 3.99 GPA.

Throughout her four years of late nights studying and early mornings before school coming in for extra help, Montpetit thinks her motivation came from within. Without any older siblings before her, there was no pressure for her to get a certain GPA or to maintain elite grade standards. “I wanted to get all A’s. I was self-motivated … my parents literally thought I was crazy at some points; they questioned where this came from,” Montpetit said.

Montpetit’s class schedule that led her to a 3.99 GPA was no walk in the park. She took many Honors classes her freshman and sophomore year, along with many AP courses starting with AP Human Geography sophomore year. She took advanced courses in a variety of subjects, including geography, English, math, Spanish, science, and economics. “AP Human Geography sophomore year was definitely the hardest class I took; I had an hour to an hour and a half of homework a night in that class alone, and also Honors English 10 was a challenge for sure,” Montpetit said.

Even with a rigorous schedule, Montpetit was still able to find enjoyment from her classes. She realizes that each and every class builds off one another, and that students can use skills learned in some classes and apply them to others. “I really liked AP Comp with Ms. Joseph. I really felt like it helped me become a better writer my junior year, and Spanish two and three with Profe Terrell was really enjoyable,” Montpetit said.

Montpetit’s teacher who inspired her the most was Profe Terrell. She had her for Spanish two and three, and she helped Montpetit excel in Spanish through her four years. Along with taking Profe Terrell’s classes, she was her student teaching assistant for her final three years at BSM.    “Ava was a life-saver; she is really strong in Spanish to begin with, and I knew I could give her an assignment to do and it would always not only be done quickly but done well. Sometimes I would tell her I do not need this right away, take your time, you have a week or two weeks to complete this, and literally the next day she would return the work I gave her to me,” Terrell said.

Being a teacher’s assistant was not Montpetit’s only extracurricular; she participated in a variety of different activities across her high school career. She was the captain of the ski team, participated in BPA, Medical Club and RKVC, along with playing lacrosse and volleyball her underclassmen years. She also worked for her dad’s restaurant during high school, and was also a nanny for a family during the summer. During the pandemic, Montpetit even started a non profit organization for single mothers in the Twin Cities. “It was called Nurture Newborns and we ended up raising 20,000 dollars for mothers in need during Covid,” Montpetit said.

Montpetit has advice for future Red Knights who are trying to push themselves and possibly get the recognition of Salutatorian. “Definitely learn how to manage your time, having a lot of homework every night, your time management skills need to be solid. Learn how to develop better relationships with your teachers, I would always do test corrections and when I did not understand something I had to learn how to ask for help and go in early,” Montpetit said.

Montpetit’s hard work ended up paying off for her, as she will be attending Boston College in the fall and will be double majoring in Finance and Psychology.