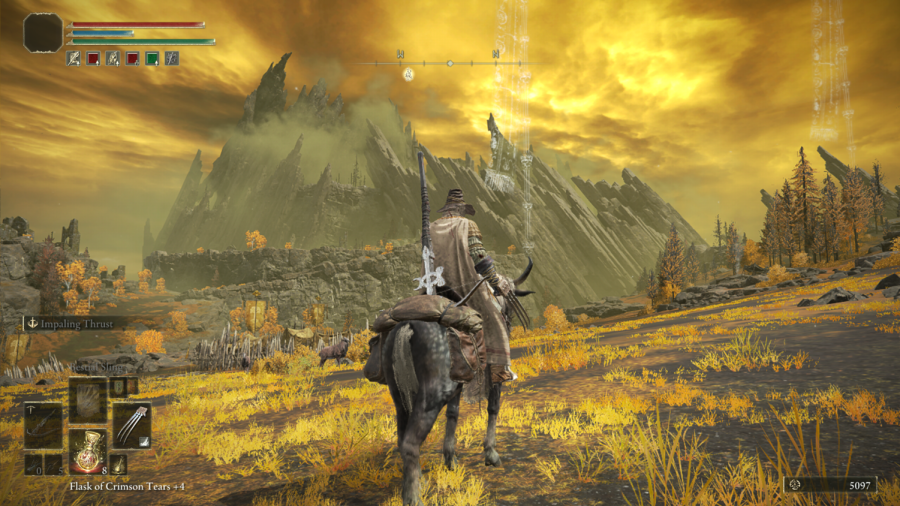 Gallery|9 Photos
Mt. Gelmir looms in the distance, just beyond the Altus Plateau.

Elden Ring’s world map is massive—but not in terms of physical area. Boasting a size of almost 80 square kilometers, Elden Ring’s map has an area that, while large, is eclipsed by many other contemporary open world titles. Where the game’s map truly shines is its density. Elden Ring’s world is packed with countless unique locations, none of which are lacking in their explorability. Each of the six main regions contains a set of unique subregions, and each subregion has its own set of enemies, bosses, items, and lore.

The game starts off by putting players in the first area, Limgrave. The area, while comprising only a small portion of the full map, offers countless hours of exploration that is both engaging and challenging. Upon reaching the first checkpoint, players are given complete freedom to choose where they want to go: directly ahead is an optional boss, while a lake with ruins and a dragon lies to the east. Even further east is the magical and bear-infested Mistwood forest, which lies south of a swamp and church. Players who journey south will find an immense building on stone legs—a “Walking Mausoleum”—and the oceanside Castle Morne. In the northwestern corner of Limgrave, Stormveil Castle awaits players who are ready to make progress in the game’s story.

These are just a few of the exploration opportunities for players who are itching to get lost in Elden Ring’s world. In addition to the aforementioned areas in Limgrave, there are several dungeons and catacombs—many of which are hidden away in dark corners and rock faces. Each of these areas has a final boss, rewarding players who explore with an extra challenge and a new experience.

Elden Ring also incentivises players to explore by giving them a method of travel: a magical horse named Torrent that can be summoned with the click of a button. The horse can be mounted and dismounted freely as long as players are not in a dungeon or castle. With the additional abilities of a double jump and the ability to attack from horseback, Torrent opens up a world of possibilities for players to reach high places and quickly move through the map.

While Limgrave is complex, it is still just the first area. Beyond Limgrave to the east lies Caelid, a red-skied region with an inner swamp, a ghost town, the heavily fortified Redmane Castle, and much more. North of Limgrave is Liurnia of the Lakes, which is a central swamp surrounded by cliffs and a plateau. The swamp is full of ruins and contains a mysterious castle: Raya Lucaria Academy. North of Liurnia of the Lakes, the map opens up into a massive section with three more areas: Mount Gelmir, Altus Plateau, and Leyndell, Royal Capital. Mt. Gelmir is home to a mountain with a summit point and the lava-filled Volcano Manor, while Altus Plateau is a sunny, open outdoor area with autumn-like imagery. Leyndell, Royal Capital is an intricate golden city built on top of an equally intricate system of sewers and tunnels.

Beyond these areas lies the Mountaintop of the Giants and the Consecrated Snowfield, both of which are icy wonderlands with limited visibility due to many blizzardy conditions. All areas hold just as many exploration possibilities as Limgrave, but that still isn’t all of Elden Ring’s world.

There’s more to the map than what meets the eye. There are three other areas in Elden Ring that lie completely below ground. This is where the game starts to get very strange, as the scenery in these underground areas doesn’t always reflect the fact that they are, in fact, underground. One such area, Siofra River, features a perpetually starry night sky along with a smattering of grass or a patch of trees here and there. Another area, the Lake of Rot, features a lake and ruins system so immense that it’s easy to forget you’re underground while exploring it.

Exploring each of these areas can take hours upon hours at a time, but no area overstays its welcome. Elden Ring’s pacing is dependent on the player: if someone starts to get bored with a certain place, they have the freedom to move somewhere else instead. Not only does this help players better appreciate each area, but it also blurs the lines between defined regions enough to where exploring one area often means ending up in another. Elden Ring’s world is one where players can truly lose themselves, having an organic feel that most other games completely lack. 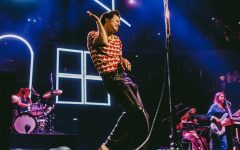 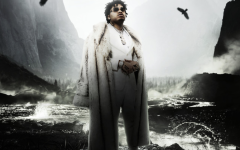