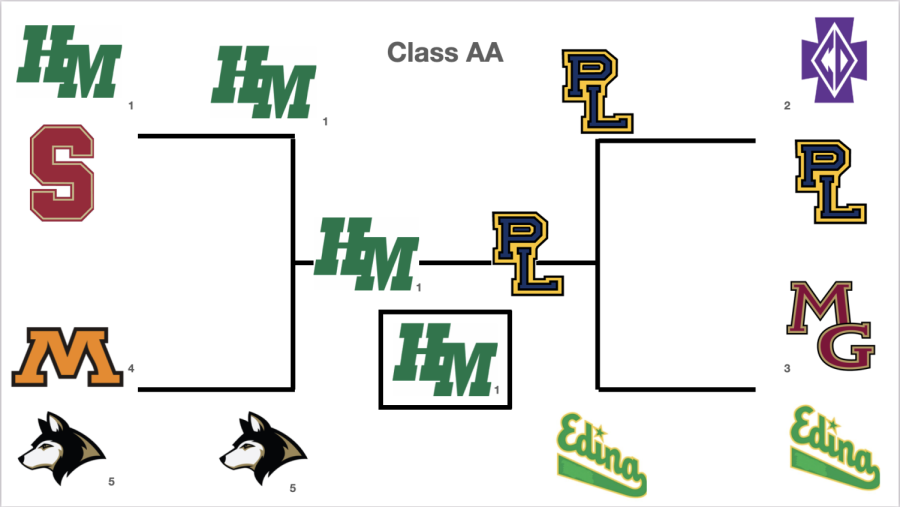 The Class AA bracket will showcase some of Minnesota’s best hockey.

The Spuds are led by Mr. Hockey Finalist senior Gavin Lindberg and fellow seniors Harper Bentz and Carson Triggs. The Spuds are an offensively loaded team with a powerhouse first line consisting of Lindberg, Bentz, and Triggs, all tallying over 50 points on the season, with Lindberg and Bentz both scoring 64. The Spuds finished with an overall record of 21-6-1 despite their average of a two point goal differential, which is the lowest in the tournament. The Spuds have the firepower to put teams away and were given the fourth seed in the tournament. They are set to face the fifth seeded team, Andover.

We believe Moorhead’s top line will only allow them to hang in with Andover’s depth for so long, resulting in a first round exit in what is likely to be a high scoring affair between the two teams.

The Cougars have made it back to the Xcel Energy Center after a disappointing loss in the 2021 State Championship game. Returning this year is a powerful lineup of juniors, including leading scorer Tanner Ludke and other notable players Aidan Willis, Ashton Dhams, and goaltender Jack Hoachsprung. They average 4.96 goals a game with a near four point goal differential as well as sound goaltending from Ashton Dhams, mounting a .931 save percentage and 1.35 goal against average. The Cougars were given an unranked random draw and are set to face number one seeded Hill-Murray.

We believe the Cougars will give their best stab at Hill-Murray, yet will come short in the first round with a lack of overall depth and talent in comparison to their opponent.

Led by juniors Landen Gunderson, Finn Brink, and senior Josh Guliani, The Crimson look to win a title after being sent home in the semifinals last year. Maple Grove is an offensive threat of a team, averaging 5.18 goals per game, with scoring led by Landen Gunderson and Finn Brink. Gunderson and Brink have scored 19 and 26 goals this season. With six players over the 20 point mark, the Crimson are set to face off against Edina as the number three seed in the tournament.

Although the Crimson are the number three seeded team in the tournament and set to go up against the unranked Edina team, we believe that they will fall to the Hornets. The Hornets’ success in section 6AA was nothing but impressive and Maple Grove will not be able to counter Edina’s style of play.

Led by Mr. Hockey Finalist senior Drew Fisher and younger brother junior Jake Fisher, the Raiders play a faced paced offensive game. The Raiders have an overall record of 24-3 heading to the state tournament with both Fisher brothers tallying over 50 points. Also securing a backbone in between the pipes is senior goaltender Marko Belak with a .938 save percentage and a 1.57 goals against average. The Raiders received the number 2 seed and are set to face Prior Lake.

The Raiders had an impressive regular season, but because of a severe lack of competition in comparison to other teams in the tournament, they arguably had the easiest road to state. We predict that the late season success and fire power of Prior Lake will shock the Raiders. For this reason we believe that Prior Lake will upset number two seeded Cretin Derham Hall.

Ranked #1 in the preseason by “Lets Play Hockey,” Andover has risen to the occasion and punched their ticket to the Xcel Energy Center. Led by seniors Gavyn Thoreson, Cayden Casey, and Weston Knox, the Huskies show the most depth out of any other roster in the tournament and seem to excel on all 200 feet of the ice. Finishing with a 22-5 overall record heading into the state tournament, the Huskies seem to have all the tools to get the job done and are set to face number four ranked Moorhead as the number five seed in the tournament.

We believe the Huskies have a favorable first round matchup against Moorhead, as their depth and ability to control play on both ends of the ice clashes well with a high octane offensive team.

Next, the Huskies are set to play the winner of Hill Murray vs. Lakeville South. We predict Hill Murray to be victorious. Unlike their first round matchup, the Pioneers are well equipped to counter the Huskies’ 200 foot playstyle with a great defensive core and will fall short against Hill Murray in what we believe to be a defensive battle and low scoring affair.

Led by seniors Wyatt Wurst, AJ Doll, and Trae Fetchko alongside junior Jimmy Clark, the Hornets were able to make it out of the very difficult 6AA section. Finishing with an overall record of 20-8, the Hornets are nothing to mess around with. They have a somewhat even distribution of goal scoring including leader Tre Fetcko with 20, Jimmy Clark with 15, and a total average of 3.86 goals per game. The Hornets received an unranked random draw in the state tournament and are set to face off against number three ranked Maple Grove.

We believe that the Hornets will be able to slightly edge out their first round opponent Maple Grove. Due to their success in section 6AA and shutting out all three of their section opponents, there seems to be no slowing down now. They would then face the winner of Cretin Derham Hall vs. Prior Lake which we previously predicted that Prior Lake would win. The matchup of Prior Lake vs Edina is one of the toughest picks in the entire tournament, as it is a faceoff between two teams with great section performances that seem to be turning it on at just the right time. We think that Prior Lake’s Mr. Hockey Finalist Alex Bump gives them the slight edge over the Hornets, leaving the Lakers victorious.

Led by Senior Captains Alex Bump and Will Suchemacer, the Prior Lake Lakers finished with an overall record of 18-10 heading into the state tournament. The team averages 4.71 goals per game, led by leading scorer and Mr. Hockey Finalist Alex Bump, who has 41 goals this season.

The Lakers seem to be peaking at the right time going 12-3 in their last 15 games. They received an unranked random draw in the state tournament and set to face number two seeded Cretin Derham Hall.

In Prior Lake’s first matchup against number two seeded Cretin Derham Hall we predicted an upset in favor of Prior Lake. Following this matchup facing the Hornets, two very evenly matched teams, the sheer fire power of the Lakers gives them the slight edge over Edina. As our prediction stands they would be set to face off against Hill Murray in the championship Game.

Led by two Mr. Hockey finalists seniors Dylan Godbout and Leo Gruba, the pioneers are filled with talent and look to redeem themselves after being disqualified from the tournament due to a Covid-19 exposure last year. They were able to hold onto their star studded defensive pair consisting of seniors Leo Gruba (32 points) and Axel Begley (33 points) from the year prior. Finishing with an overall record of 23-4-1, the Pioneers have an outstanding offensive capability. The Pioneers Received the number one seed in the tournament and are set to face off against Lakeville South.

As previously stated, we predict that the 2022 state championship game will feature the number one seeded Hill-Murray Pioneers matched up against the unranked Prior Lake Lakers. This game would feature three Mr. Hockey Finalists, making the talent on both sides a critical factor. Hill-Murray seems to have an advantage in depth, whereas Prior Lake seems to have an upper hand when it comes to grit and firepower. Prior Lake’s Alex Bump seems to have put his team on the map over the course of the season, while Hill-Murray has been here before and has the talent and depth to override firepower. With this in mind, we predict the 2022 class AA Minnesota state champions will be the Hill Murray Pioneers.

This poll has ended.

Who will win the Class AA boys hockey tournament?