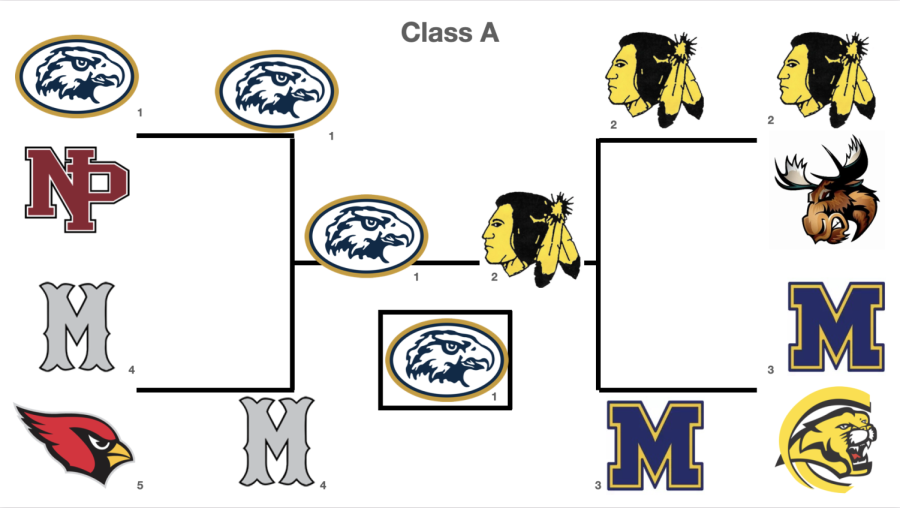 Class A brings its own hockey toughness to the ice and promises fans exciting match-ups.

New Prague defeated Albert Lea 5-2 to become section 1A champions and earned their trip to the Xcel Energy Center. Receiving an unranked/random draw, the Trojans will face off against the number one seed Hermantown. The team has a record of 11-15-2, with team leaders John Schmidt and Will Anderson scoring 26 and 25 points respectively this season. The Trojans have been given an unranked random draw for the tournament and are set to matchup against Hermantown.

We think that Hermantown is frankly going to walk right around the Trojans; unfortunately the Hawks have all the tools to beat New Prague and it would be a major upset if the result was different.

The Mankato East/Loyola boys hockey team defeated New Ulm 6-0 to claim the section 3A title. Junior Shea Gavin leads the team with 29 points, 16 of which are goals. Senior Aiden Prochaska also has 28 points on the season with a team leading 20 assists. The Cougars have a record of 17-10-1 and average 3.71 goals per game. The Cougars were given an unranked random draw and are set to face off against number three ranked Mahtomedi in the state quarterfinals.

In the first round we expect Mankato East/Loyola to put up a good fight but ultimately fall short to Mathomedi because of the goaltending matchup and level of competition throughout the season.

The Moose, mounting the worst overall record heading to the Xcel Energy Center as a class A team finished 13-14-1. Led by leading scorer senior Wilson Dahlmier and fellow senior Gavin Simon, the Moose are a very physical team. What they may lack in skill, they make up for in heart. The Moose unexpectedly made it out of their section upsetting St. Cloud Cathedral and they look to continue the upsets in their first round matchup against number two seeded Warroad. The Moose were given an unranked random draw in the tournament.

We predict that the Moose will fall short in their first round against Warroad due to the sheer firepower that the Warriors have. Monticello shouldn’t be able to hang in this one very long.

The Alexandria Cardinals have earned their way to the tournament gaining the number 5 seed after defeating Fergus Falls in the 6A section championship. The Cardinals are currently 19-6-2 and average 4.96 goals per game. Senior Josiah Gronholz has an impressive 59 points on the season, 34 of which are assists. The Cardinals will play the number 4 seed, Minneapolis, in the first round of the tournament.

We predict the Alexandria vs. Minneapolis game to be a low scoring affair, with Alexandria being unable to keep up with the speed of Minneapolis.

The Mahtomedi Zephyrs earned their way to the Minnesota state high school tournament after beating Chisago lakes in the 4A section finals. The Zephyrs are led by Junior David Wolsfeld who has 22 goals and 24 assists for a total of 46 points this season. The Zephyrs also have senior goaltender Ben Dardis who was named goalie of the year. Dardis has an impressive .942 percent save percentage.  Mahtomedi received the 3 seed and will face off against the unranked Mankato East/Loyola.

We predict that the Zephyrs will be able to cruise past their first round opponent of Mankato East/Loyola who are undermatched for them and aren’t able to play with Mahtomedi’s pace and physicality. In the following round they would play the winner of Warroad vs Monticello which we predicted that Warroad would take this matchup. The Zephyrs match up well against Warroad with sound defense and stellar goaltending; however, the depth and firepower that Warroad has we believe will only allow the Zephyrs to hang around for so long making that a semi-final exit.

Led by sophomore forward John Bebler who scored two goals and senior goalie Alex Lemont, who made 30 saves on 31 shots in their section final win over Delano, the Minneapolis based boys high school hockey team is headed to Xcel Energy Center. The Storm captured a win in their thrilling section final game against Delano. Minneapolis is the number four seed in the tournament and it is the first time Minneapolis has made the state tournament since 1994. They will play the number 5 ranked Alexandria.

We believe that Minneapolis’s first round matchup is one that favors them. Minneapolis has solid depth at the class A level as well as a faced paced game, which should result in a win for Minneapolis in the first game of their tournament run. After their first round they would be set to face the winner of Hermantown vs New Prague which we predicted will be Hermantown. Hermantown has a large advantage over Minneapolis and their sheer speed alone should be enough to take down this Minneapolis squad.

The Hermantown Hawks came off a 11-0 win over Duluth Denfeld to earn the title of 7A section champions. Team leaders Dallas Vieau and Zam Plante both recorded a hat trick on the night. Star sophomore Max Plante leads the team with 66 points going into the state tournament. Another key player for Hermantown is sophomore goalie Dane Callaway who has 17 wins and 2 losses on the season. Hermantown finished with an overall record of 26-2 and averaged 5.89 GPG. Hermantown received the number one seed for the tournament and are set to match up against unranked New Prague.

The Hawks are one of the most storied class A teams in the history of Minnesota state hockey, winning seven state championships since 2010. Their matchup against New Prague in the first round should be nothing short of a blowout for the Hawks and we would be surprised with any other result. Cruising past this round they would face the winner of Minneapolis vs Alexandria which we previously predicted that Minneapolis would win. Minneapolis has their best team in recent history; however, we still don’t think that they will be able to best the Hawks in this matchup. This would lead them to the state championship game.

Coming off a 3-1 win over Thief River Falls, the Warroad boys hockey team is headed to St. Paul. Led by Mr. Hockey Finalist Daimon Gardner with 39 goals, senior Jayson Shaugabay with a team leading 49 assists, and senior Matt Hard, the team has been able to take on a tough section. Junior goaltender Hampton Slukynsky has been an important part of the team with a 1.48 goals against average and .928 save percentage. The Warriors finished with a 24-3-1 overall record and will be the number two seed in the class A state tournament.

We believe that the Warriors’ highly talented offense, paired with great depth and stellar goaltending, will be no match for Monticello. We predict that they will cruise past the first round with ease. Following this matchup they are set to face the winner of Mankato East/Loyola vs Mahtomedi which we previously predicted that Mahtomedi will be victorious. Both teams have  solid goaltending, yet Warroad has the slight edge in offensive firepower which is why we believe they will take this matchup and advance to the state title game.

As we predicted, the final matchup for class a would feature the Hermantown Hawks vs the Warroad Warriors. This matchup would feature the two deepest teams in the tournament, and two of the best forwards in the tournament, Zam Plante and Damion Gardner. If this matchup occurs we predict a fast paced battle with most of the game being played in transition and many shots from both teams. We think that Hermantown has the slight edge in this matchup with experience and a slight advantage in depth and competition throughout the year. We predict that the 2022 class A state champions will be the Hermantown Hawks.

This poll has ended.

Who Will Win the Class A Boys Hockey Tournament?