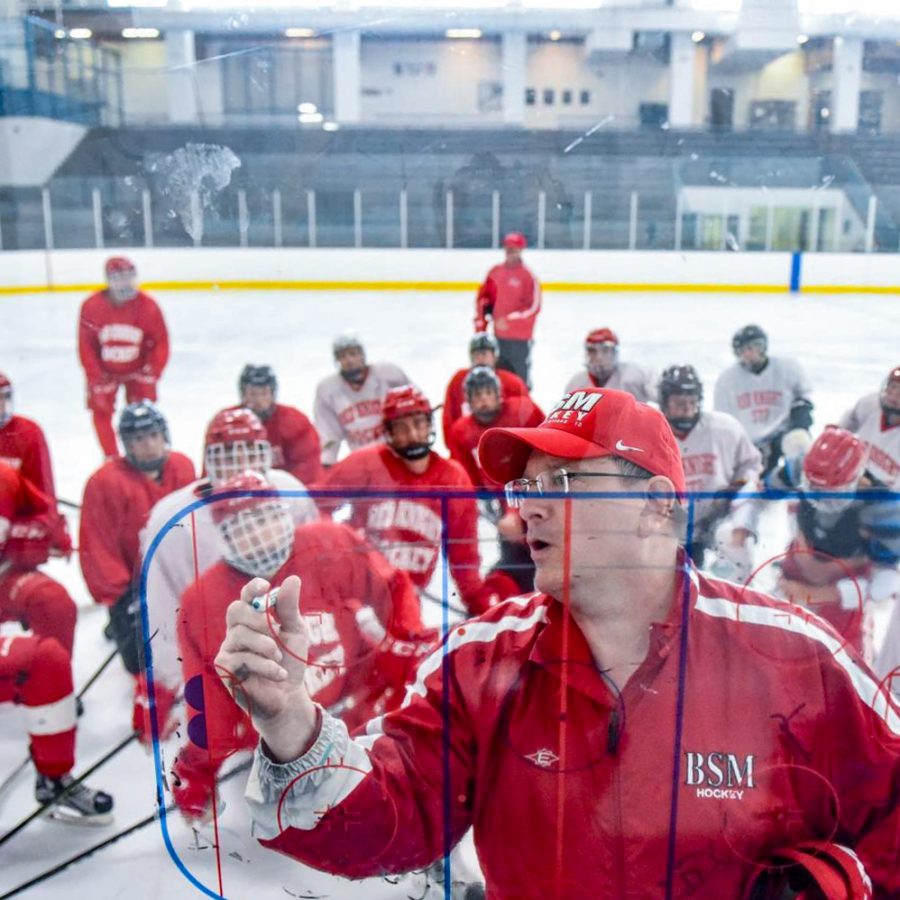 Was there a time before then that you were just a casual photographer?

“I’d been photographing on a digital camera for about 5-7 years prior to doing it professionally. Before that it was too expensive to have my own gear. But, dating back to college & high school, when I wasn’t borrowing someone else’s gear, I was always a big consumer of photos. My biggest sources were weekly publications. Most folks had beer posters on their dorm walls. I had images I’d cut out from magazines. I was particularly drawn to Sports Illustrated & Newsweek because they were reporting on the same subjects you could get in the daily paper & on TV. But being weekly, they had to find a better angle or a different story. Those images really appealed to me.”

What was the BSM event you did first?

“BSM Boys’ Hockey at St. Michael Albertville 11/24/2015. It was the season opener. BSM beat STMA 6-1 and went undefeated that entire season until the Section Semifinal.”

Do you have a favorite sport you like to photograph? If so, why?

“Baseball was the 1st sport I photographed so there’s some nostalgia for it. Being outdoors helps. And baseball & softball have a few elements that no other sport has – that camaraderie in the dugout. I’m drawn to anything where I can get a clear view of athletes’ faces. That’s somewhat easier in sport without helmets. And in this pandemic winter, wrestling was the only sport that didn’t have facemasks. But I’ve never had a chance to shoot wrestling for BSM yet. That said, I shoot more hockey than anything else. Between the high school games and professional women’s hockey and the pro & elite college players of Da Beauty League, I shoot a lot of hockey and I’m pretty passionate about it. Despite the challenges presented by helmets, the plexiglass barriers and the rink lighting, I’m drawn to the sport in a big way. It’s very difficult to shoot. But there’s so much speed and so much action.”

I’ve seen you’ve done some senior pictures too, would you like to comment on doing those vs sports?

“The candid photo work I do at games has really informed my portrait work & vice versa. There’s more smiling in portraits. But I’m really going for an authentic take in both. Super sharp with great detail in both. And even in my portrait work, I’m going for that shot when the person is––it’s a couple seconds after they think I’m done shooting. Or when they start to tune out the camera. Folks relax a bit at that point, and they let some more personality out. That’s what I’m going for.”

Is there one specific BSM event or photo that sticks out as one you’ll never forget?

“That magic 2015-16 season for Boys Hockey – they had an away game against my alma mater Hill-Murray. I got a sequence of shots of BSM forward Zach Risteau & HM forward David Quast chasing a puck as it flew towards the plexiglass in front of my camera. BSM won that night 5-1. I’ve definitely taken higher quality photos since then. And there certainly have been pinnacle moments with BSM including rivalry wins, Section Final wins and trips to State (including BSM’s State Baseball Championship game at Target Field in 2019). But the date of the Zach Risteau pic [right], so early in the season for the Red Knights and so early in my pro work, it augured something huge ahead.”

How many hours after do you put in editing/uploading photos on a normal 1 game shoot?

“Every hour of shooting requires ~ 7-8 hours on my computer. That’s split between reviewing thousands of shots and then editing a final set. Bigger games take even longer.”

What is your favorite thing about shooting?

“The people. If it wasn’t about the people, I’d probably just shoot wildlife. Or airshows. I get to know the programs and the coaches year after year. And I get hooked on their visions. The athletes themselves each have their own stories, their own journeys, too.”

In the past several years, many BSM sports teams have had the privilege of being photographed by one of the most popular sports photographers in the state: TeMo Photo. Tom Morris, the man behind the camera, is not only a highly skilled photographer, but an amicable and extremely down to earth guy. He began doing professional photography in 2014 and shortly thereafter began shooting BSM Hockey in 2015. Since then, he’s covered Boys’ and Girls’ hockey, lacrosse, soccer, and baseball. I’ve had the pleasure of meeting and talking to ‘TeMo’ several times through both BSM hockey and the SLP Flyers, and was ecstatic to be able to do a Q&A with him.

TeMo has been far and away the most popular local sports photographer in my time in high school. His ability to capture instantaneous moments in high quality is unrivaled, and his talents are also known by college and professional athletes who acknowledge and repost his pictures online. “BSM is lucky to have TeMo as a photographer. He takes top tier photos that make memories last, and he is a super nice guy,” senior football and hockey player Charlie Frattalone said.

Having a photographer like TeMo to capture high school sports moments is an outstanding privilege that not many students have, and the vast majority of student-athletes will never reach a level where photographers are the norm. TeMo Photo is truly one of a kind. 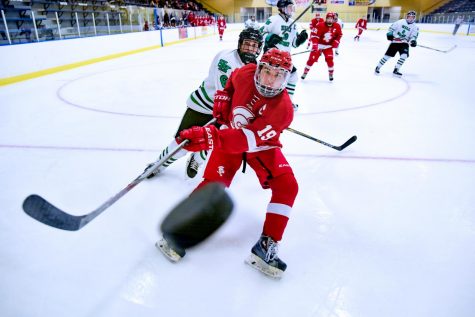