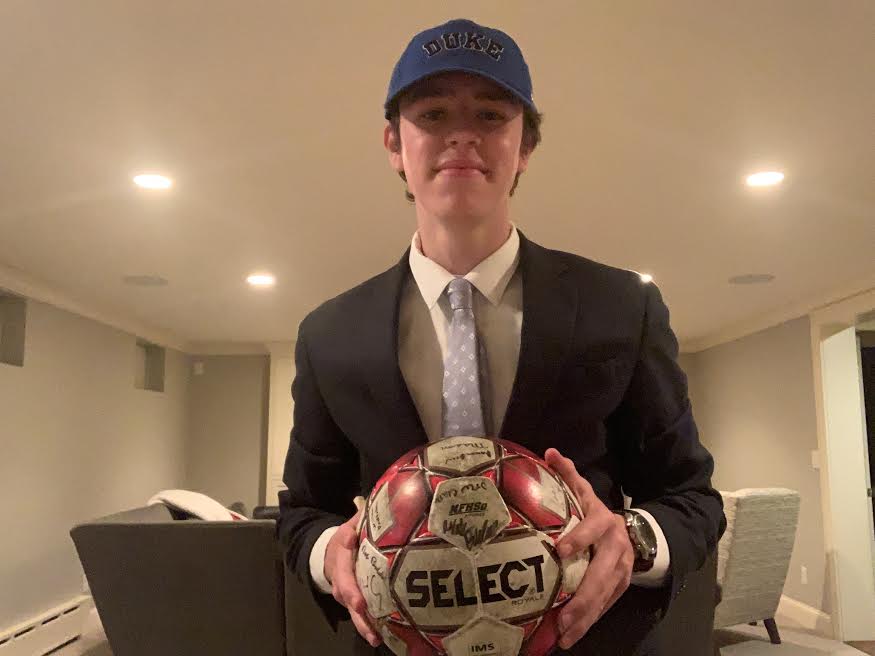 After years of hard work, Valedictorian Ronan Brew can finally say it has paid off.

It wasn’t easy. Countless hours of studying has been put towards Brew’s goal. “Balancing my time was always a very strenuous process for me. I have a broad range of interests outside the classroom that always kept me busy. To be honest, amidst schoolwork, club and high school soccer, mock trial, and speech, I never really sat down, so to speak, and budgeted my time,” Brew said.

Throughout all the time Brew has walked the halls of BSM, he has spent most of it in Mr. Rob Epler’s classroom learning the Latin language. “There was something about having the same teacher— shout-out Mr. Epler— and working with the same students for four years that I loved. By Latin V, there were only five of us in the class, but we had a really strong sense of community that I loved. I always looked forward to Latin,” Brew said.

Mr. Epler has been at BSM long enough to remember when Brew was born, so he has gotten to know him pretty well. “Part of being successful and performing well in school required strong organizational skills & a diligent work ethic.  And while I’m not at his house watching him work, Ronan clearly has those down, as his success in school generally, & in my class specifically, has shown.  I mean, he’s a valedictorian— he must be doing something right” Epler said.

In the classroom, Brew has shown exceptional skills. “He’s always been one of the top performers— very sharp and very quick on the uptake.  He’s also always been a very active participant, involved, and engaged in class,” Mr. Epler said.

The hardest class Brew took was Calculus BC. “I took Precalculus as an independent study, so Calculus in general was an uphill battle. BC forced me to face math in ways I never had before and always forced the best out of me. Mr. Bowler was a huge help and always motivated me to do my best, though. Second semester junior year was a very chaotic and busy time for me, too, so there were definitely moments then where I thought I wouldn’t be able to keep all A’s,” Brew said.

Next year, Brew plans to further his education at Duke University in Durham, North Carolina. “Although this may change, I’m currently leaning towards a dual major in public policy analysis and economics,” Brew said.

Brew credits his success as being a valedictorian to BSM. “I don’t think I would’ve had the experience and success that I did if it weren’t for BSM. I can’t think of a better place to grow and learn, and I’m always grateful for the BSM community that allowed me to succeed the way I did during my time,” Brew said.