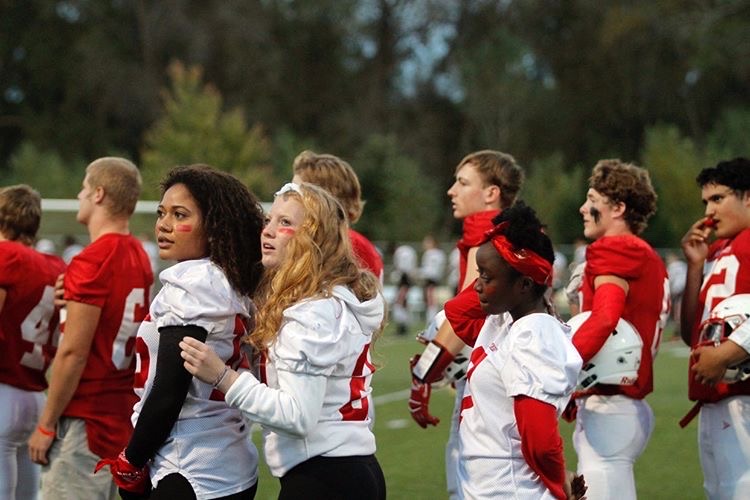 Players and managers stand in line during the national anthem.

The history of BSM football was pretty weak. Most teams prior to 2015 had gone winless or had one or two wins. The thought of going to state was pretty ambitious, until the team made it in 2015. At the time, it was a huge accomplishment and one that would be tough to follow up on, so a state championship in 2016 was a pretty far-fetched idea. Little did the Red Knights know, the team was going to steamroll the competition en route to the section playoffs, which they would also win. To even their own surprise, the team made it to the state final and won.

Sedona Brown, 2016 Manager: “I think that the season before the state championship helped the boys see what they had the potential to do. They made it to state the year before but got knocked out early; I think they saw that and just wanted more and knew that they had the skill to get it done.”

Joe Creer, 2016 Assistant Coach: “There’s actually a video from before the season, and I told [the team] how our season was going to go. I said we were going to have a good season, but we were going to struggle against Armstrong and Holy Angels, and we lost against both of those teams in the regular season that year. But I knew how we were going to finish.”

Joe Marinaro, 2016 Running Back: “No one had picked us to even make state, and we were an underdog in every single game. So, while we were nervous, we knew that we were going to win.”

Eric Wilson, 2016 Offensive Lineman & Captain: “Honestly, the thought had never really crossed my mind until the section playoff schedule was released. I saw we had an opportunity to make it to the state tournament. After winning the section and seeing the great teams in the state tournament, however, I had my doubts again. But like I have said time and time again, being with my teammates and feeling the energy we had before each of those games made me realize how possible it was that we could win a state championship.”