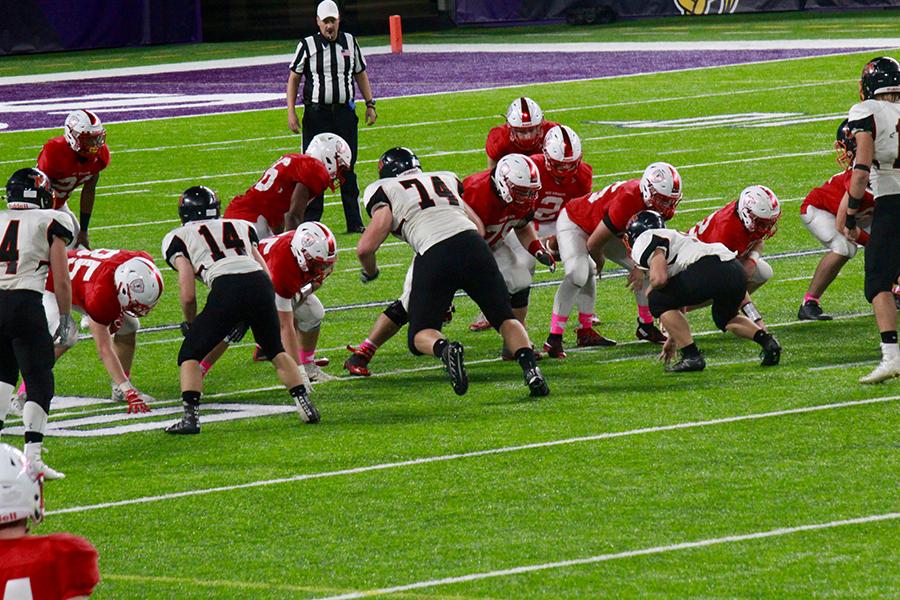 The defensive lineman jumps offsides, getting the Red Knights closer to securing the victory.

BSM football had never won a state championship before November 25, 2016. So, in a roller-coaster game that featured countless ups and downs––injuries, turnovers, and big plays––the Red Knights were able to overcome adversity and not lose sight of their season’s goal: a state championship. Even when star running back Ricky Floyd went down and fans thought it was over, the team persisted. Unexpected stars emerged, fans kept faith, and the coaches didn’t stray from their gameplan.

Liam Ford’s heroics were a key part of the unexpected success in the championship game; he ran for two touchdowns and also had two interceptions and emerged as the unforeseen star of the game. Braden Fitzgerald delivered a huge momentum-changing hit on the Winona quarterback that got the crowd fired up. Alex Houlihan played almost every position on the field. John Witmore had a pick-six just before half time. Everyone did their part to help win the title. When BSM players, coaches, and fans started realizing that they may be state champions, feelings of disbelief, excitement, and thankfulness overwhelmed them.

John Whitmore, 2016 Linebacker: “We just treated it like it was another game, we knew what we needed to get done.”

Pat Kalb, 2016 Defensive Lineman: “The lights in the bank were very bright and it took a moment for everyone to adjust. The turf was so bouncy and the ceiling was high.”

Ricky Floyd, 2016 Running Back: “My injury happened on my second carry of the state championship game, the game I couldn’t sleep about I was so ready to play. It was a run play to the right; I got past the line of scrimmage and on my blind side, as I turned my head to the left, a linebacker ducked his helmet and drove it straight into my shoulder. It happened so fast I couldn’t feel it at first, but as I was trying to get up off the ground, I pressed down on the turf, and my left arm went limp, and I could feel my bone sticking out. The trainer, Percy [Botchway], helped me off the field and took me back to the locker room. He told me I tore my AC joint and that if I went back in I would tear it completely. It hurt to not be able to play with them after the hard work we put in during the offseason and the regular season, but it made it all worth it––winning state and going down in history.”

Eric Wilson, 2016 Offensive Lineman: “Before the game I was calm but a little nervous. I knew we would have to play well to beat a good Winona team. When Ricky injured his shoulder in the first few minutes of the game, however, is when I had my first doubts about whether we could pull off the victory. He was our best player. Those few doubts faded quickly when I realized our team was gritty enough to figure something out. Whether it be Alex Houlihan playing 20 positions or Liam Ford filling in at running back, trust in our team is what pushed any doubts and nerves out of my mind.”

Joe Creer, 2016 Assistant Coach: “Unlike everyone else in the stadium, when Ricky got hurt, my goal as a coach was to make it to half time, then make adjustments. It was never thought that we weren’t gonna win it, we knew we were gonna win it. We had to make some sideline adjustments but then told everyone to keep their confidence up.”

Pat Krieger, 2016 Co-Head Coach: “When we intercepted the ball that sealed the game, that moment stood out because the other team had a chance of winning, so once we had the ball, it was like a moment of relief.”

Eric Wilson, 2016 Offensive Lineman: “[In the last seconds of game,] I experienced feelings of disbelief. It was the proudest I have ever been of an accomplishment, regardless of being a team or individual one, because such a significant amount of time and effort was put into that season by so many great people.”

Mark Whitmore, Parent and 2016 Booster Club President: “After every game, you’re a little bit thankful because you know your kid didn’t get hurt, but when you win the state championship and realize it’s something that the school has never done in a hundred years, you’re just so thankful. It’s an experience you’ll never forget.”

Joe Marinaro, 2016 Running Back and Linebacker: I cannot describe it.  I was so, so happy, even though I didn’t even play in the championship game. I am just so grateful I got to be a part of that team.

Joe Creer, 2016 Assistant Coach: “When we won state, I still didn’t believe it. It was hard to believe that we won. I kept saying, ‘Pinch me.'”