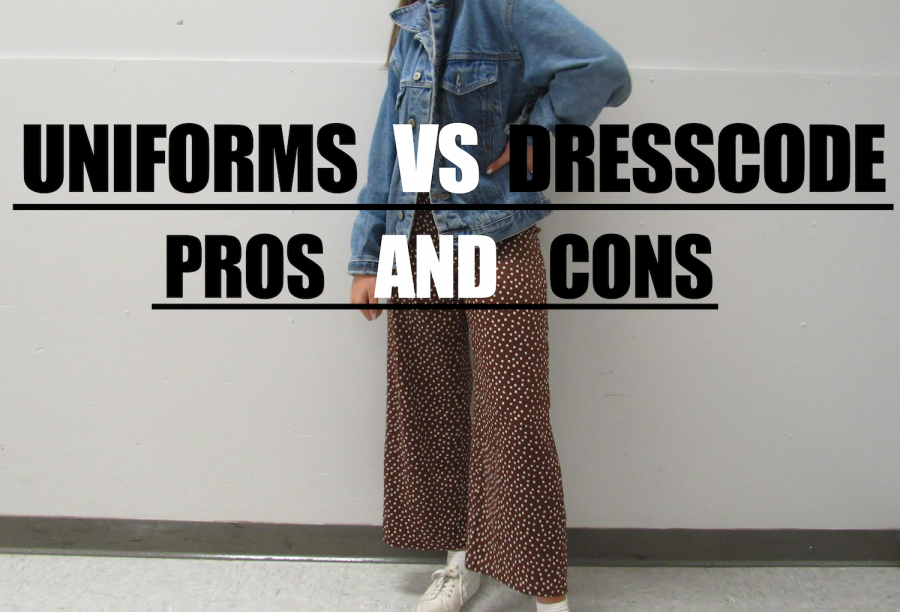 Students at BSM don’t have uniforms, so they can wear outfits that are in dress code, like this one.

The Pros of Uniforms

Ever wonder how you can sleep in later, not have to constantly worry about being in dress code, AND not have to stress over what to wear every day? What if we told you that this is all possible with one thing: uniforms. Personally, we think that uniforms would be beneficial to all students, faculty, and staff members, and parents.

If BSM were to simply pick a basic shirt and the option between pants, shorts, or skirts of one color and gave students the chance to spice it up how they want, many students will accept the idea.”

Students would get to save time every morning because they wouldn’t have to pick out their outfits every day. This could result in sleeping in later or spending more time on other aspects that go into getting ready in the morning. By wearing uniforms, there would be no room for comparison between students because everyone would be wearing the same thing. Students can form opinions about their peers based on their personality rather than judging them based on what they are wearing. In addition, students would not have to worry about being dress coded as much. Sometimes it could be hard to focus throughout the day because of the outfit you are wearing, but with uniforms, the distraction of your clothes would go away and the focus would change to learning and academics.

Along with students, faculty and staff will be relieved of the pressure that is associated with their duty to dress code. If all students are dressed similarly, they do not have to focus on the length of shorts or “distracting” leggings or “inappropriate” shoulders showing.

Parents will be able to save money with school uniforms. Back to school shopping won’t be a stressful mess and you might even be able to keep the same uniform throughout your four years of high school; all it takes is a quick trip online to purchase exactly what you need. BSM could provide the uniforms in the spirit shop or online so that purchases could be charged straight to the students’ tuition.

Although uniforms are a good idea for the BSM community, students should be able to express themselves through various accessories such as shoes, socks, jewelry, etc. Now, we are not saying what the uniforms should be, but we think that if they were to make us wear something like a white polo and blue pants with no other options or use of accessories; there would be an uprising. If BSM were to simply pick a basic shirt and the option between pants, shorts, or skirts of one color and gave students the chance to spice it up how they want, many students will accept the idea.

The Cons of Uniforms

I’ll just say it: I hate uniforms. Maybe it has something to do with the fact that I went to a Catholic school with uniforms for nine years––I’m sick of them. There’s a whole lot of reasons to hate uniforms, but let’s look at what I consider the most important one: uniforms destroy the ability to express yourself with your clothes.

At my middle school, the uniforms were boring: khaki pants and a white shirt, day in-day out. When I started coming to BSM, the biggest shock that came with no uniforms was how different everyone looked. They weren’t just wearing different colors and patterns, they were all in different styles. I’ve seen people in sweats next to people in sweaters over button-downs, next to people in cropped pants and patterned socks. There’s something great in seeing so many different looks because it shows the many different things that people like.

Uniforms limit this freedom to express yourself. My middle school only limited your shirt, pants, and sweater, but after I left, they started to limit socks and hair accessories. Uniforms can limit way more than just a shirt and pants. If you violate the uniform, you’re in a similar situation to a dress code violation. Teachers would still have to enforce uniform rules just like dress code rules.

Of course, I won’t deny that there are benefits to uniforms. You could theoretically sleep in later because you don’t have to choose what to wear. Often, you hear the argument that uniforms will limit bullying because people can’t be teased for what they wear. However, I can’t speak for everyone, but I’ve never panicked over choosing my outfit in the morning, and any stress associated with the choice has never forced me to wake up earlier. If anything, just take a few minutes to plan your outfit the night before.

We have students wearing heels and blouses next to students in basketball shorts. People are pretty accepting of what you choose to wear at BSM.”

And it’s not as if BSM students are horrendously judgmental about clothes. Even if I dress more sloppily than usual, I’ve never been made to feel ashamed of what I’m wearing. I don’t know of anyone who has been. I’m sure it’s happened, but I doubt it’s a widespread problem. Like I said, we have students wearing heels and blouses next to students in basketball shorts. People are pretty accepting of what you choose to wear at BSM.

So let’s recap. Uniforms limit freedom of expression and harm the ability of students to show what they like through what they wear. There are some pretty clear benefits that people will point to when suggesting uniforms, but I don’t think they outweigh the freedom that no uniforms give people. BSM students have shown me that they’re non-judgemental and accepting, which is one of the reasons we don’t need uniforms––and we shouldn’t want them.