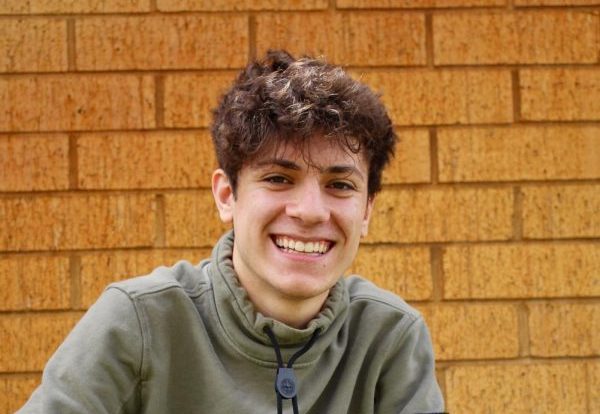 Vinny DiPerno will be attending a fashion school in the fall.

Vincent DiPerno, known by many as Vinnie, and known for his unique style, is a relatively new addition to the Benilde St. Margaret’s community. He’s lived all across the U.S., finally coming to BSM his junior year. Yet, in this limited amount of time, he has impacted those around him with his unique sense of style, eccentric personality, and great sense of humor: what could be more tremendous than that?

Throughout his life, DiPerno has inhabited multiple cities and states, as his parents’ work has pulled his family in many directions. “So I was born in Colorado, moved to Las Vegas, then I moved to Illinois, spent two years there… After that, lived in Georgia for about five years,” DiPerno said.

Although Georgia was DiPerno’s self-proclaimed favorite place that he has lived, Minnesota came in at a close second. However, while many adore Minnesota for the famous 10,000 lakes, DiPerno wouldn’t consider that a selling point for him. “Minnesota isn’t horrible… I’m not a big lake guy… I’m kind of afraid of lakes,” DiPerno said.

Moving to a new high school in a new state would be a difficult feat for most, but DiPerno aided the transition by playing hockey over the summer. DiPerno met many of his friends before the school year started, as he practiced and played hockey with Coach Pauly. “It was the beginning of junior year, so I think I moved six weeks before school started… It honestly wasn’t that bad because over the summer, I was with Coach Pauly playing hockey,” DiPerno said.

DiPerno has been playing hockey since his early childhood, and he has continued the sport throughout high school, playing for the St. Louis Park Flyers and the Eden Prairie Eagles. However, DiPerno’s other, more prominent passion, his interest in style and the fashion industry, is the source of his broader life goals. Because DiPerno has moved so many times with his family, he has been exposed to various cultures and people; this has contributed to his passion for the fashion industry and his own style. “It’s kind of just been years of culminating… moving around, being introduced to different cultures, kind of just seeing how people dress… I don’t know, [I] like the grunge, darker aesthetic, of course,” DiPerno said.

He’s a really good guy because he has a set of values, and he sticks to them…he just always does what he wants to do and not what other people [want him to do]… he [also] has the best music taste at BSM.””

According to DiPerno, music has also contributed to his fashion style. He enjoys a range of music, from heavy metal, to the smooth vocals of John Mayer. “It’s called like metal rap, so it’s a lot of loud guitars and bass… I have a very broad music taste, but I normally listen to metal… and John Mayer… John Mayer’s the most metal man I’ve ever seen,” DiPerno said.

As for his current clothing choices, DiPerno prefers darker clothing right now, but it wasn’t always that way. DiPerno clothing style has evolved with time, and he’s explored a variety of different looks. “I used to be like complete preppy kid. Then I changed to complete grunge skater kid, and now I’m here with my all black,” DiPerno said.

DiPerno plans to attend Columbia College in Chicago to pursue a career in the fashion industry, with a major in fashion design and a possible minor in entrepreneurial studies. “I am hoping to also do a minor in entrepreneurial studies, because I think the goal is creating a fashion label or being able to sell myself to another fashion label that I enjoy,” DiPerno said.

As Diperno aspires to be a fashion designer in his future, he already has ideas about the theme or aesthetic of his future fashion line. “The aesthetic of being open minded and free about it… I know that sounds a little cliche,” DiPerno said.

However, DiPerno does not have his entire future mapped out just yet. He is comfortable exploring all the possibilities of his future career. “I would absolutely love to stay in Chicago, love the city. I definitely would envision myself being there, but honestly, I don’t know… The world of fashion could take me anywhere. I could be living in Japan in ten years; I could be living in the UK in ten years,” DiPerno said.

Yet, beyond his passion for fashion, DiPerno also cares about politics and staying informed. He is vocal about his views, and he does what he can to learn about current events and multiple viewpoints. “I wanted to be intelligent and informed about my voting, and I would like other people to be,” DiPerno said.

However, while DiPerno has become very informed about politics and the fashion world, the most important thing that he has learned is to be patient with those around him. “Something that I wish that I knew is people are a lot more friendly than they truly seem. Everybody gets so nervous about making a good first impression and… from what I’ve learned and especially [from] moving around, is just give it time,” DiPerno said.