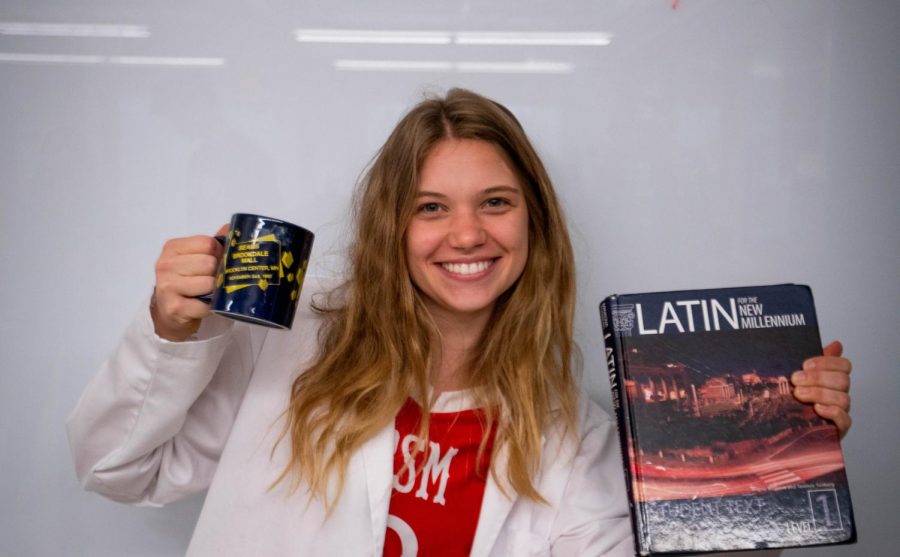 From her leadership in lacrosse, her passion for Latin and science, and her genuinely kind disposition, Jane Hoyt is undoubtedly tremendous.

“She just tries to offer support and be there; she’s a really good listener.” - Sally Calengor

Jane Hoyt is a prime example of a star BSM Red Knight: her hard work and infectious energy has made her a staple of the BSM community. From her leadership in lacrosse, her passion for Latin and science, and her genuinely kind disposition, Hoyt is undoubtedly tremendous.

Hoyt’s love for the BSM community is prevalent; she was nominated “Ms. BSM,” a superlative in the 2019 yearbook, and her contagious school spirit is evident. “I love the small school because I think it’s just so much more of a sense of a community… really tight knit people… When picking a college, I wanted to make sure that there was a lot of school spirit involved,” Hoyt said.

Earlier this year, Hoyt even helped to host one of BSM’s pep fests, along with John Whitmore. She considers this one of her favorite BSM memories. “My favorite memory is probably doing the pep fest with John Whitmore. It was kind of a clown show, but it was so fun, so cool; my grandma came; she was crying,” Hoyt said.

Hoyt’s BSM spirit has also been evident in her involvement in various sports and activities. While Hoyt played tennis for her freshman and sophomore year, she has been most dedicated to lacrosse, which she has played for six years. “I’ve invested most of my time and energy into [lacrosse], especially just being a captain,” Hoyt said.

In order to improve, Hoyt spent countless hours during off-season and over the summer working to better her lacrosse performance. She worked out with Coach Creer in order to be at the top of her game for her senior season. “I think I just had a big goal to be better and get myself to be stronger, because it kind of showed in my previous season that, you know, I could work on a couple things: footwork, strength. So I put a lot of time and effort last fall/winter, and then the following summer, I did a lot with Coach Creer and working out with him,” Hoyt said.

Beyond her school spirit and dedication to lacrosse, Hoyt has created fellowship and community in her classes, especially in her Latin class. Hoyt has studied Latin at BSM for most of high school, and through this class, she created long-lasting friendships. “This is actually probably… a memory that will carry on for forever for me, because my Latin class, we’ve been together since 8th grade, and it’s a really tiny class. I’m not in Latin 5 this year, but we’re just a super tight group… We have Latin parties. They’re seriously the coolest people I feel like I’ll ever know,” Hoyt said.

Studying Latin for the majority of high school instilled within Jane a unique appreciation for Roman times and mythology, causing her to found the Classics Club at BSM with other fellow Latin students. “I got together with Doreen Liu, Megan Daubenberger, Brad Shibley… and we decided to found the Classics Club, which basically is just for people who are interested in learning about ancient Roman times and mythology,” Hoyt said.

However, Hoyt’s real passion goes beyond the ancient Romans; she hopes to study something science related as she furthers her education at the University of Minnesota. “I’m hoping to do something science involved, so maybe biology or biochemistry, since it’s such renowned school,” Hoyt said.

Hoyt attributes her love for science to the BSM Junior High, specifically her seventh grade teacher, Ms. Zahiti. “Most of my interests in science in general [are] from my seventh grade science class, Ms. Zahiti, who still works here. She seriously instilled this love for science in me, and it’s just carried over, and ever since I [have been] trying to figure out what I want to do with that interest,” Hoyt said.

As of now, Hoyt is set on pursuing something in the medical field, although working directly as a doctor is not what she would find most fulfilling. “My dream career would be something involved in developing medical devices. I was all about medical school and… becoming a doctor, but then I realized that I don’t know… if I can do that much school. And I just think I’d be burnt out, and I don’t want to be burnt out, I want to keep going… I decided to restructure my plan into more of the business side of medicine,” Hoyt said.

As college nears, Hoyt has stayed grounded, thanks to her tight-knit family. Her family owns Rustica Bakery, which has been a place for her to connect with her family and two sisters, Mary and Lily. “My dad owns Rustica Bakery, just down the street on Lake Street. He was working for Caribou for a long time in the 90’s, early 2000’s. He decided, he took it upon himself, to start his own coffee business, so he started Dogwood Coffee Company, and then bought Rustica… I go to Rustica probably every day… There’s always a family member there, constantly, seriously, I’m not kidding… I’ll check ‘find my friends’ after school, and both of my sisters will be there, and I’ll go meet up with them. Or my dad will be there, or my mom, in the morning,” Hoyt said.

Yet, while Hoyt has accomplished many things with the help of her family and the BSM community, what makes Hoyt truly tremendous is her positive attitude and wise point of view. Throughout high school, while she has learned lots about Roman mythology and biology, she has learned, most importantly, about the importance of authenticity. “Looking back on my freshman and even sophomore years, I cared so much about other people’s perception of me. Even the upperclassman, I feel like I always had to prove myself to them, and at the end of the day, if I have to prove myself to anyone, then it’s not even worth–– they’re not even worth your time,” Hoyt said.