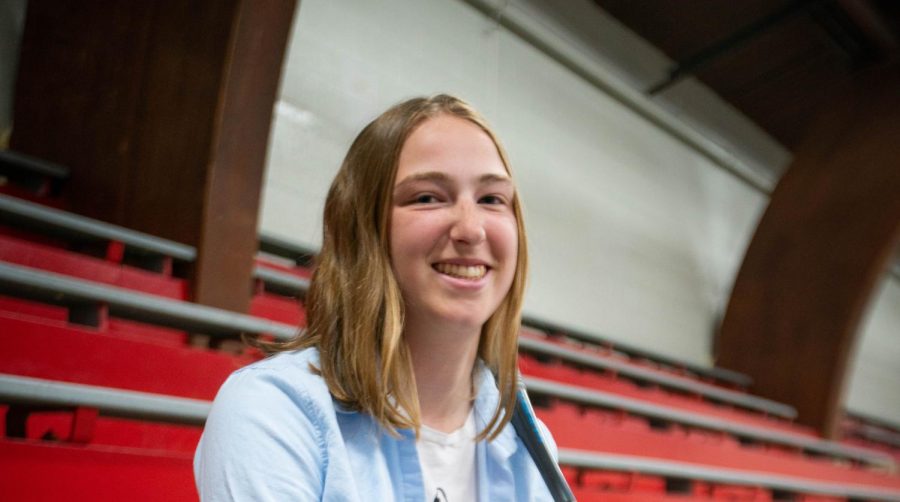 Despite being captain of three very different sports, Isabel Fleming knows the most important part of any team is being able to work with others

“She’s probably one of my favorite people that I’ve ever met; she has this very quiet joyful aura.” - Taylor Damberg

As the esteemed captain of three varsity sports (cross country, basketball, and softball), it’s safe to say that Isabel “Izzy” Fleming has the athletic prowess of a Barbary lion. On May 3, Fleming was honored for her success on the court, the field, and the track when she received the prestigious Athena Award, which is given to the top female athlete in the senior class. While Fleming may seem like an obvious choice to most, she herself was not anticipating such recognition. “I didn’t expect to win [the Athena] because I thought that you had to go to college D1 in order to get that, but I felt really honored to receive that award because I just felt like all the hard work I put into all my sports paid off,” Fleming said.

Despite being captain of three very different sports, Fleming knows the most important part of any team is being able to work with others––something she does quite well. Having played all of her sports since freshman year, Fleming has formed a tight bond with her teammates which has resulted in many wins and triumphs for the BSM Red Knights. “You get the sense that you have to rely on other people in order to succeed and you get that from basically all the sports,” Fleming said.

However, Fleming is more than just an athlete; she’s also a die-hard Disney fan who can proudly quote Pixar’s Ice Age in its entirety. “I have seen [Ice Age] probably a hundred times and if [someone] started playing it, I could probably quote the entire thing…I just really love to quote to movies in everyday interactions. Some people think its weird. Especially my teammates,” Fleming said.

While Fleming’s love for Disney may be large, she admits her exposure to the company has been limited. Needless to say, Fleming’s all about in with the new, out with the old. “Ice Age, of course, is the pinnacle of my existence. Emperor’s New Groove I’ve seen so many times. Brother Bear is actually the background on my computer because I’m so obsessed with it. Finding Nemo––great, classic. But I haven’t seen like the old Disney movies, like Dumbo. Why would I waste my time watching Dumbo?” Fleming said.

She doesn’t hold back. “Bambi. Are you telling me I should watch Bambi? That movie is an hour and ten minutes long. That is an hour and ten minutes that I could watch something else,” Fleming said. But thinking old Disney movies are trash isn’t the only abnormal belief Fleming holds to be true. “Unpopular opinion: Adam Sandler is great…in [Bedtime Stories] at least,” Fleming said.