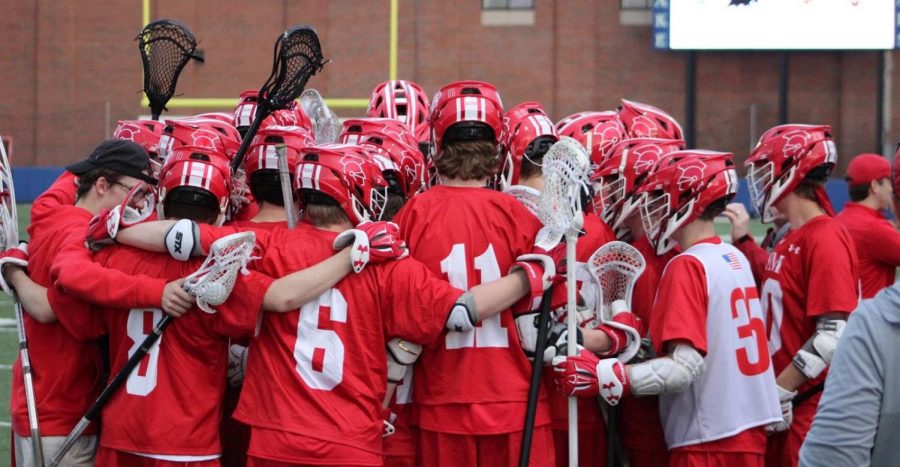 The full team huddles before a big Blake game.

The way athletes prepare before games is essential to the way they play, and that is no different for the boys’ lacrosse team.  After the team goes to the Chapel for team prayer, about half of the team will be slumped somewhere around campus while the other half plays wall ball in the Haben Center. For away games, they have silent bus rides to games to get in the zone, mentally preparing for whatever could come next.

Shay Kinney Leonhardt, D3 Commit: “I myself just think about my matchups and some of the plays we ran through and film we watched. The team has its own rituals, but those are just for the team to know about.”

Rob Horn, Head Coach: “We really don’t try to make the game bigger than what it is, a game.  We have certain way we go about our prep, our play, so that’s what we tend to focus on more than anything.  I try not to go too far down the moving pregame speech hole, but I do often remind them about what is important.”

Isabel Erickson, Varsity Manager 2018: “Before the games we lay out their sticks as they run and give them emotional support.”

Anna Carr, Varsity Manager 2018: “We were there to encourage the boys more than anything. They would hear us, but obviously we can’t relate because we’re not part of the brotherhood aspect of it. All we could do is tell them that they got it.”

Coach Chaun Klemetsrud, Defensive Coordinator: “[I prepare for games by] watching a lot of game film, opponents and our own.  We’re looking for tendencies and patterns within team schemes as well as individual match-ups.  ‘If you know the enemy and know yourself, you need not fear the result of a hundred battles.’ – Sun Tzu.”