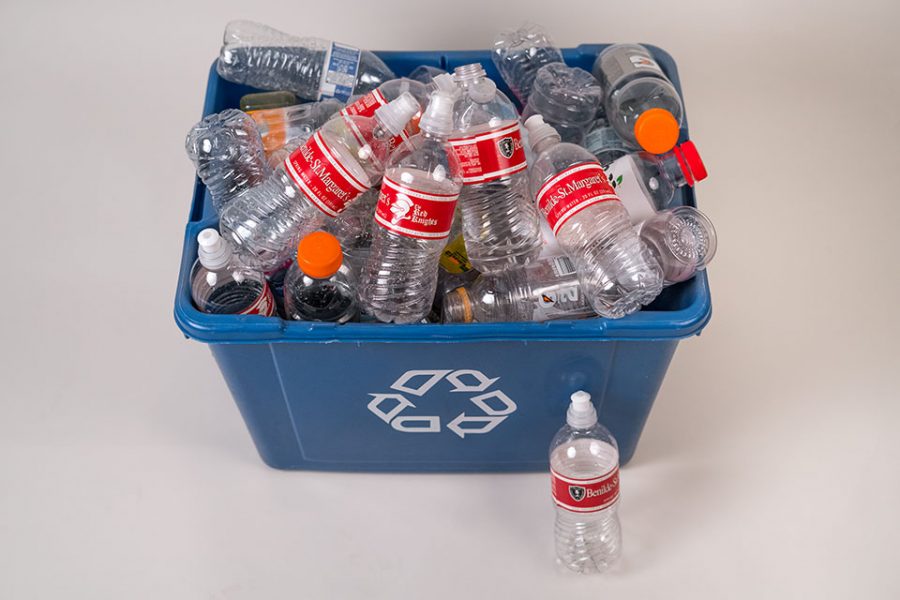 Plastic can not only pollute the environment, but can harm nature, humans, and animals. The use of plastic, along with the use of water, has become an increasing substantial issue.

Water is a prevalent issue, and BSM does its part to limit plastic water bottles and unnecessary water waste.

With the growing awareness of climate change, water, the water cycle, and use of plastics have become incredibly prevalent issues when examining global environmental impacts. Theses issues, which have worldwide implications, are also relevant at BSM.

Less than one percent of Earth’s water is available for human use. Yet, that does not deter the United States from overconsumption. The Scientific American found that the U.S. has the highest water footprint per capita out of any country. According to the EPA,, the average American family uses 300 gallons of water a day, and 95% of that goes back down the drain. On average, BSM uses 195,000 gallons of water per month, costing the school around $2,900 a month. However, the school finds ways to limit the cost. “The large majority of the watering we do is from a well on the north side of the property. This water is free to us other than the electricity to run the pump. All of the athletic fields are on this system as well as all of the grassy areas around the building,” Facilities Director Mr. Dean Laird said.

In an average month, BSM uses enough water to create over 18 professional-sized hockey rinks. Throughout an entire school year, BSM will use enough water to fill almost three olympic-sized swimming pools. Of 39 students surveyed, 53.8% believed BSM could do more to cut back on its water usage. “We’ve done things to decrease our use of plastic water bottles, but I can’t say that we have ever started an initiative directed at reducing water consumption itself,” Principal Dr. Susan Skinner said.

We hoped to help with recycling and cut down on the use of plastic.”

Taher reports an average of a little over 100 water bottles sold daily. As a result, they have tried to create other water supply options, including this year’s new and improved hydration station. The table in the cafeteria used to simply be one water cooler. However, this year Taher upgraded to four pitchers of water, two of which contain fruit-infused water. “We hoped to help with recycling and cut down on the use of plastic,” Taher employee Cherie Sweeney said.

Chemistry teachers have assisted in getting students to further reflect on the importance of water through a water project. This project tasks students with comparing the quality of water throughout BSM. Additionally, last year’s chemistry students were given a special project during Earth Week focusing on water on a global level. The Honors Chemistry students studied the acidification of oceans while Applied Chemistry students examined the recycling of plastic bags. “The chem classes circled on water quality, and it went back to using water bottles and [plastic use],” chemistry teacher Ms. Abbi Baker said.

The science department has been doing this project for over ten years and plans to continue it for years to come. Yet, they add new elements to it each year. Last year, classes chose to donate to a charity in Africa that works on increasing citizen’s access to clean water. “I want students to realize that we are very lucky in this country––a lot of the time we have really safe water,” science teacher Ms. Jennifer Roushar said.

After the project, some students felt compelled to act. Groups encouraged other students to bring in their own water bottles to school, whereas others talked to Taher about serving more beverages in aluminum cans and creating more hydration stations to decrease plastic waste.

I want students to realize that we are very lucky in this country––a lot of the time we have really safe water.”

“[I think] even getting students to think about what they’re using is a step further than where we’ve been,” Baker said. Other teachers have made an effort to decrease the use of plastic water bottles, too. Two years ago, theology teacher Mr. Jeremy Cramer tried eliminating plastic water bottles from his classroom. Yet, due to the popularity of disposable water bottles, Craemer was unable to entirely ban them from his room. “I attempted one year to make my classroom a not-plastic-water-bottle zone, but it was one of those things where I had to pick my battles…I just don’t have the energy to fight this one right now,” Cramer said.

However, it seems the easiest way for BSM students to decrease their plastic footprint, is simply by remembering to bring a reusable water bottle. Of 62 students surveyed, 57.8% stated they purchased a plastic water bottle from Taher because they forgot to bring one from home. “It’s hard for me to remember a water bottle when I’m so busy in the morning, so I just buy one from Taher,” senior Annie Valerius said.

Still, many students chose to bring their own water. In fact, 32.2% of students surveyed reported bringing a water bottle to school everyday. Many of them were motivated by the cost, as buying a plastic bottle from Taher everyday for an entire school year adds up to over $200. “I never have lunch money, so I always bring a water from home,” junior Frida Fortier said.

Many of these concerns have arisen in BSM’s community. “I think we should always be thinking about decreasing our water use,” Skinner said.