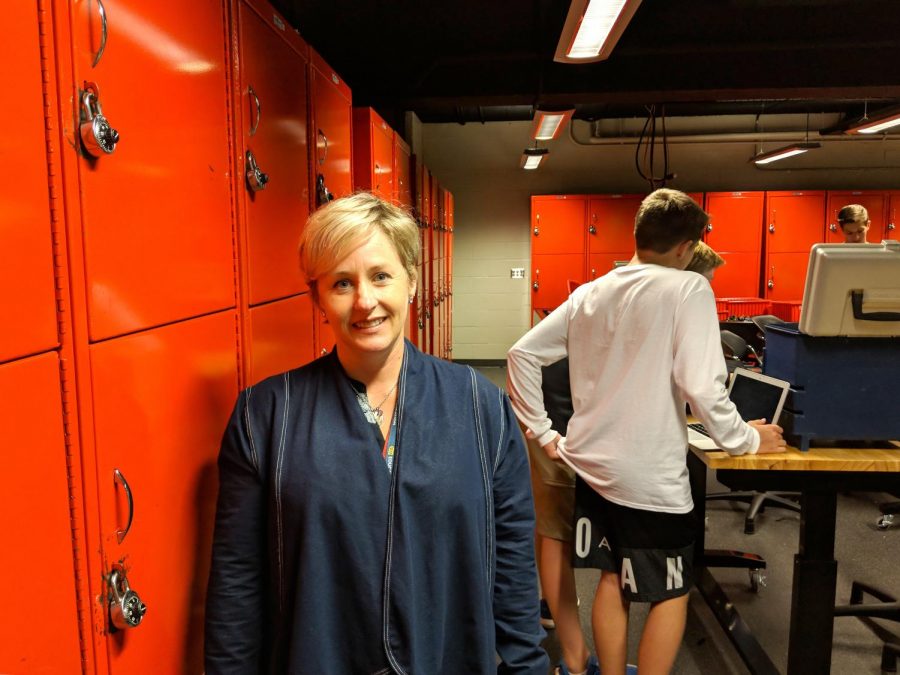 While walking through BSM, students may or may not struggle to find the basement. It’s worth the trip, however, because the basement holds many different classes including art, choir, and engineering. This year, the basement also provides a new home for recently hired engineering teacher Ms. Anne Dougherty.

Dougherty has only been at BSM for a few weeks, but she has enjoyed her experience thoroughly. Whether it’s the students, teachers, or the overall BSM environment, Dougherty seems to love her new job and everything that comes with it. “I like how BSM is very forward- thinking and how the teachers are pushed to prepare students for the world,” Dougherty said.

Prior to coming to BSM Dougherty was the head robotics coach at Cretin-Derham Hall High School in St. Paul. Dougherty also teaches a STEM (science, technology, engineering and mathematics) program at an elementary school.

When not teaching Dougherty loves to spend time with her big family of five kids, five chickens, and a husband. Although Dougherty has a big family, she felt adding several chickens to the family was worth it. “Each child has a chicken– I couldn’t just get two chickens. Each kid wanted one, so I got them all one,” Dougherty said.

Outside of school and spending time with her family, Dougherty is very active: she enjoys getting out to canoe, hike or run. Dougherty grew up on a resort with her family where she learned to love the outdoors from an early age.

One huge part of being outdoors for Dougherty is running.  Dougherty began training for marathons a couple years ago with her husband (who has qualified for the Boston marathon) and has loved it ever since. Dougherty has run 5 marathons, and is excited for her future runs. “We run because we love the big challenge of marathons, but also because we’re modeling for our kids that it’s never too late to try something new,” Dougherty said.

Dougherty grew up in St. Paul, Minnesota with her 7 siblings, the oldest being 20 years apart from her. In high school she attended Visitation where she had a wide variety of activities: she participated in student council, she was a basketball manager, and she started the girls golf team.

After high school, Dougherty went and spent her sophomore year of college living in Rome, Italy. Dougherty learned how to be self reliant and learn an entirely new language while living there. “It was one of the best college experiences… I wish every student had a chance to spend a year immersed in a new culture and place,” said Dougherty.