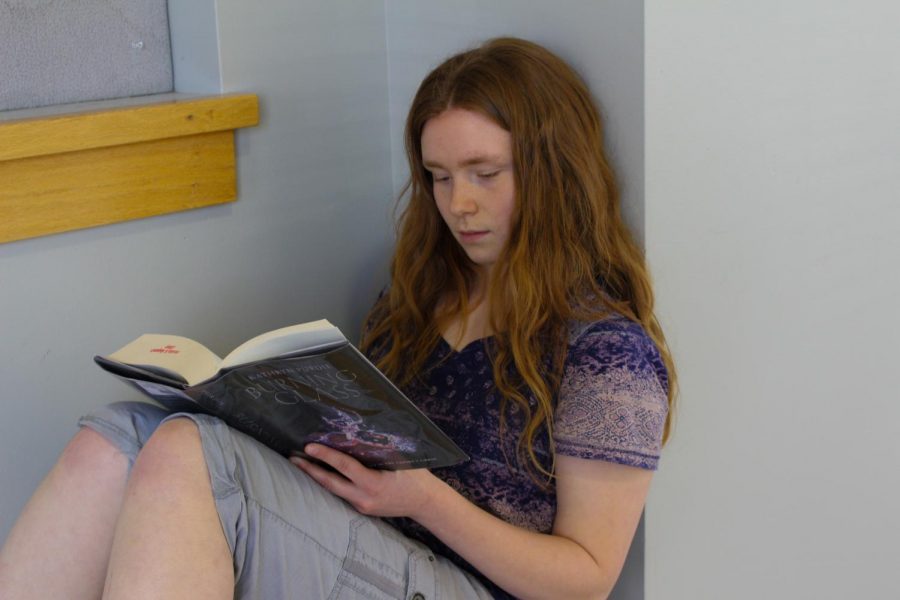 After growing up as a quiet and timid homeschooler, Spencer Sweeney has emerged into a strong-willed person who isn’t afraid to speak her mind. Since coming to BSM in 8th grade, she has had the opportunity to meet new people, allowing her to open up and be more social, and she has pursued multiple unique paths at BSM as well.

Prior to coming to BSM, Spencer never took part in anything out of her comfort zone. Being a part of the Fabulous 14 would’ve been out of the question. “My elementary school self would not have done this interview and not have written for the Knight Errant. It would’ve been too bold for me,” Spencer said.

Spencer is now able to speak her mind freely, which is why her friends and others respect her so
much. “She’s always been very individualistic and doesn’t care what anyone thinks about her. She only cares about what she thinks, in a good way, and I think that’s something a lot of people can admire,” senior Carmen Ercolani said.

Spencer has also had a love for books ever since she can remember. Reading is a way for her to immerse herself in the setting of the novel and escape the real world for a bit. Her favorite novels to read involve dragons, swords, and fantasy. “During the weekdays I don’t get much reading done, but on weekends or vacations I will sometimes spend whole days reading. This past summer I think I read around 30 different novels,” Spencer said.

Along with her love for books, she has a great passion for birds of all kinds. Her first word as a baby was “owl,” so starting at a young age birds had an incredible impact on her life. Every one of her childhood birthdays were held at the Raptor Center, and when she became old enough, she started to become more involved with the Raptor Center organization. At the age of 12, she started making toys for the birds. Soon after, she expressed interest in handling birds, specifically falcons. She was introduced to a group of “falconers” where she was able to work with hawks directly.

She’s always been very individualistic and doesn’t care what anyone thinks about her. She only cares about what she thinks, in a good way, and I think that’s something a lot of people can admire.”

During her time as a falconer, she handled two different hawks. Their names were Astrid and Flynn. She was able to create an extremely close bond with these birds. “They were my two Red Tails that I had and hunted with. They completely changed my life. I never would have known that it was possible to love something that much until I had those birds,” Spencer said.

Spencer continues to volunteer with the Raptor Center, which only fuels her passion for all types of birds.

Whether it be speaking up for what she believes in, reading, or handling birds, Spencer does everything with incredible passion. It is no wonder as to why this small but mighty senior was chosen to be a member of the Fabulous 14. “Everyday, with Spencer, there is a new quirk, story, or adventure to follow,” senior Blake Brown said.