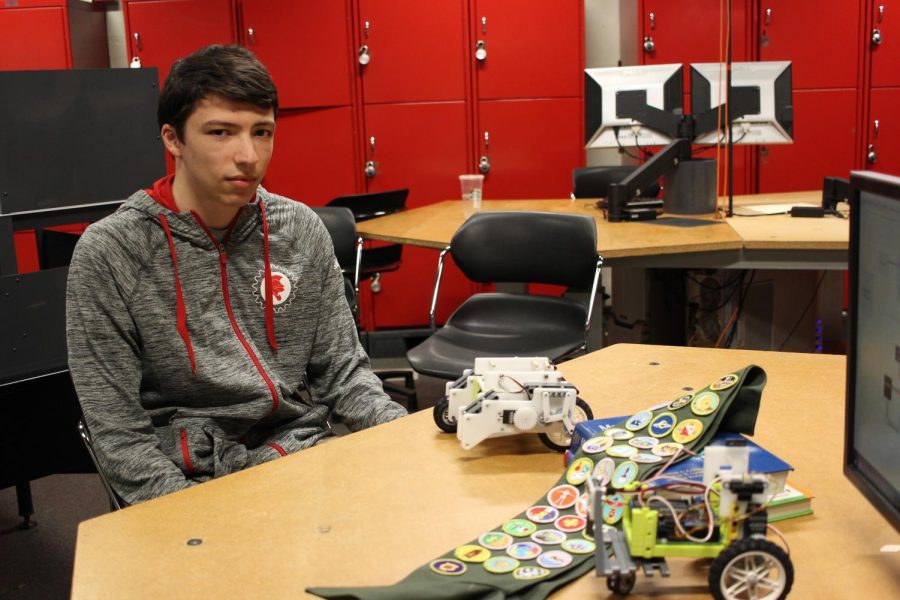 Brady Solomon shows off his robot and merit badges.

Whenever you see senior Brady Solomon, you’ll also see a navy blue Kindle right alongside him. Instead of looking up chapter summaries on Sparknotes, Brady actually read the books in his English classes. But he doesn’t stop just there—he reads a tremendous 50 books a year. But a single author in particular stands out. “Terry Pratchett is the greatest author or human that ever lived,” Brady said.

Brady doesn’t want to just read books—he hopes to write one. “I’ve written up a brainstorm: I’ve got a plot. I’m fleshing out some ideas before I do the actual writing. I plan to work on it over the summer. I have no idea how long it’s going to take since the longest story I’ve written is eight pages,” Brady said.

Knight Errant adviser Kari Koshiol was immediately impressed by Brady’s talent. “Brady’s writing is fabulous. Most people know him as a pretty quiet kid. But when I read his first essay in Advanced Comp, I realized how much of a voice he had. It was funny and overall well written. With all the other writing he did that semester, I was excited when I found out he signed up for journalism,” Koshiol said.

— Terry Pratchett is the greatest author or human that ever lived.

Brady was an editor for the 2018 Apotheosis Editorial Board, which collected and reviewed submissions for BSM’s Annual Literary Arts Magazine.

Since sophomore year, Brady took engineering, now one of his favorite classes at BSM. This year he is going to the RoboCup tournament, the ultimate goal of the class. “I’m going to be going to Montreal with the engineering team for the RoboCup which is pretty exciting,” Brady said.

Brady is looking forward to the next steps in engineering. Next year at Iowa State, Brady will continue his passion, studying either software engineering or mechanical engineering.

Through all four years at BSM, Brady volunteered through RKVC. After completing 100 hours of volunteer work, in his sophomore year, he earned the Presidential Volunteer Service Award. He is committed to service and making the world a better place.

Although he is fabulous, like all students, Brady still suffers from procrastination. “Sometimes, I tell myself I’m going to do homework, and then just go upstairs at my desk and just go on my computer, or fall asleep in my bed and take a nap for four hours,” Brady said.