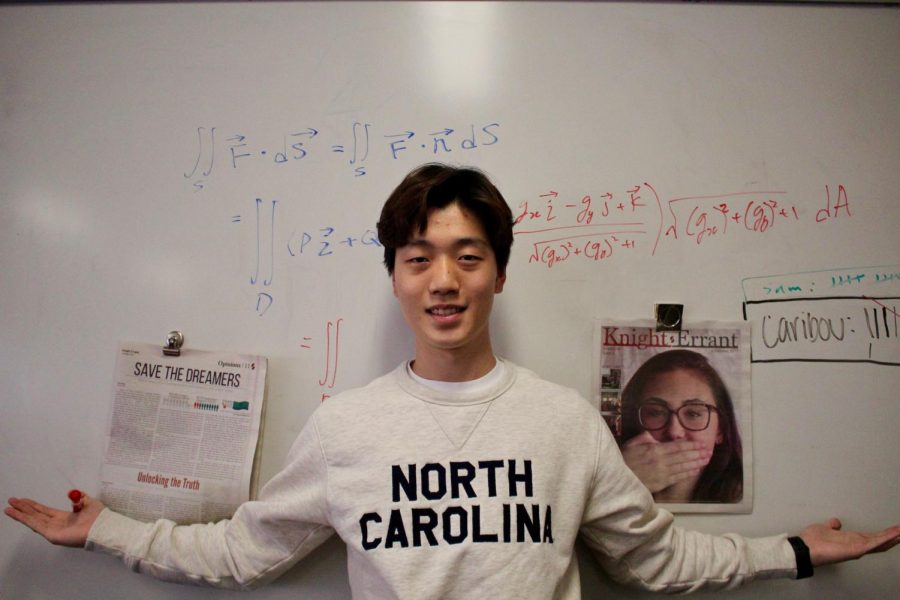 Alex stands in front of some of his biggest passions and best work.

If you’ve ever read the Knight Errant this year, you’ve probably read one of the opinions of senior Alex Kang. Just from running into him in the BSM halls, you might not guess that someone so approachable and effortlessly funny would have such strong opinions.

Alex moved to Minnesota from South Korea in the fifth grade and has been here ever since. “It was tough back then because I spoke minimal English, but now I think I’m doing pretty well here,” Alex said.

He and his older brother, Jason, live with their aunt and uncle. “My uncle is a St. Cloud native, so he’s always been here, and my aunt moved here from Korea fifteen years ago,” Alex said.

Alex is still very connected with his family and life back home, though. He and another senior, James Norkosky, even went to South Korea for two weeks over spring break this year.  “I go back home every summer for at least two months,” Alex said.

Alex attended the International School of Minnesota (ISM) for three years before joining the BSM community in eighth grade. In his five years as a Red Knight, Alex has been involved in a variety of activities. He played both soccer and baseball for multiple years, participated in RKVC and math league, wrote and designed for the Knight Errant, and played the cello in BSM’s orchestra.

“My favorite [activity] is probably Math League because it’s not very time consuming––I can just show up and compete. And it’s the only subject I can really win at,” Alex said.

Alex flew through both AP Statistics and AP Calculus BC in his junior year. This year, however, he left school early each day in the fall to go and take Multivariable Calculus at the University of Minnesota. “It was challenging at first, but once I got the hang of it, I did pretty well. But I didn’t take another class second semester because it was a hassle to drive to the U of M and all the way back to my house in Medina during rush hour,” Alex said.

I’m a person that has strong opinions on pretty much everything,”

Also known for the political opinions he writes for Knight Errant, Alex has never shied away from sharing his thoughts. “I’m a person that has strong opinions on pretty much everything, and politics has always been one of those things that I like to discuss,” Kang said.

Recently, Alex won the “Write of the Year” award at this year’s student awards ceremony for his opinion pieces.

Just in the past few months, he has had stories published about gun control, historical injustice, and the role of the media, among other things. “I think it’s a good way to communicate with the kids at our school because, if I talk to my friends, a lot of them have opposing views on issues, so writing is a good way to tell the how I feel, even if most kids don’t read it,” Alex said.

Next year, Alex will attend the University of California in Los Angeles. He plans on studying business economics and applied mathematics. “UCLA looks fun and it has good academics and LA vibes,” Alex said.