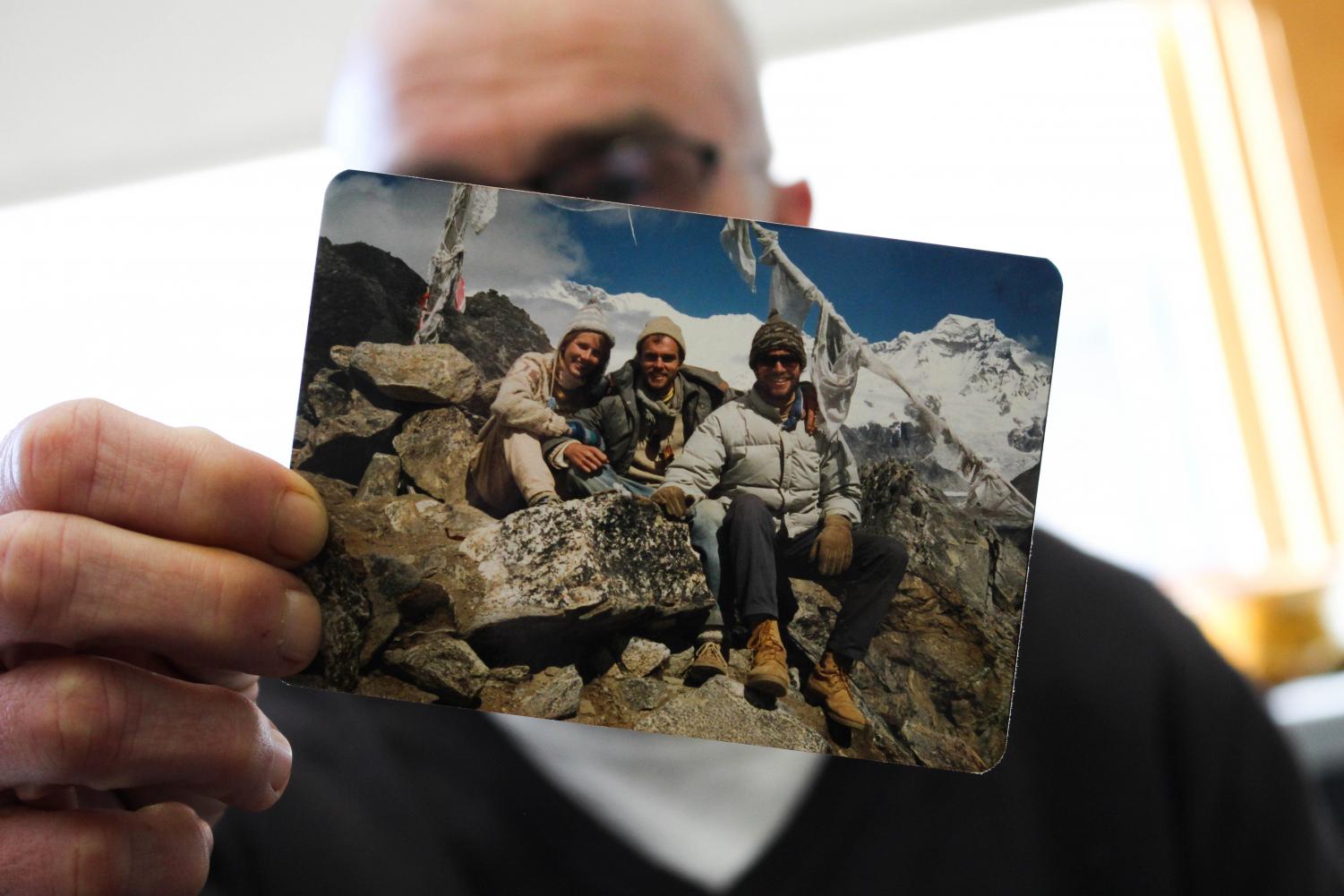 Math teacher Mr. Dan Bowler holds up a photo depicting his time in Nepal. Bowler traveled to Nepal as a part of the Peace Corps in 1988. (Carolyn Mason)

Math teacher Mr. Dan Bowler holds up a photo depicting his time in Nepal. Bowler traveled to Nepal as a part of the Peace Corps in 1988.

Mr. Daniel Bowler, math teacher and math league coach, had a life changing experience when he took two years off from teaching at BSM to teach in a remote Nepali city, train other teachers, and travel.

Bowler attended Totino Grace High School, where his social studies teacher Mr. Bud Popey told stories of his time in the Peace Corps during class. These stories inspired Bowler to join the Peace Corps later in life, but the idea was pushed to the back of his mind when he attended St. John’s University  Bowler planned to spend three years at St. John’s and an additional two years at Washington University in St. Louis to major in Engineering. He decided this plan was not what he wanted when he took Physics 191. “I hated it. I had never worked so hard in my entire life. I got a C+ in the class and [decided] I wasn’t doing well in Physics, but I was getting an A in Calculus,” Bowler said. Then he decided to become a teacher. Bowler graduated with a degree in mathematics with a minor in education.

Bowler was offered a job at Totino Grace and BSM. He was hired at BSM as a math teacher and JV Baseball coach in 1984. After four years of teaching, Bowler decided to enter the Peace Corps. “I [thought] to myself you said two years, it’s now four, if you don’t go now you never will, and that’s when I decided that this was my dream and I was going to apply for the Peace Corps,” Bowler said.

Bowler resigned from BSM in the Spring and headed to San Francisco for a three day orientation. The forty-man crew left for Nepal in September 1988. Bowler spent his first year in the Peace Corps teaching math, science and english to 4th through 7th graders in a small Nepali village. “[It was] two ten hour days walk from the nearest road, no running water, no electricity, and no plumbing,” Bowler said.  The next year, he moved to the central training district where he trained Nepali math and science teachers. The teachers came every day for one month to learn about the uses for various science equipment and different teaching strategies.  For the rest of the year, Bowler visited the teachers’ schools to observe them during classes and give them more teachings tips.

While in Nepal, Bowler visited the Edmund Hillary School on Mount Everest which is at 11,000 feet. He also went into Buddhist monasteries and saw ceremonies where they beheaded goats.  The majority of the people who Bowler interacted with in Nepal could only speak Nepali, so Bowler studied the language until he was fluent. Even today, Bowler can still speak Nepali to a degree. “Every once in a while I’ll take out my Nepali textbook, and see if I can still read it and I can. If I went back to Nepal, I would probably pick it up within 6 months. I would be fluent again,” Bowler said.

That’s when I decided that this was my dream and I was going to apply for the Peace Corps.”

Bowler was extremely remote in Nepal, especially when compared  to other Peace Corps members. The best way in and out of his area was a tiny airport, which was just a grassy field on a mountain. “The runway was at an angle. They would get the engines going as hard as they could and literally drive off the edge of the cliff and all of a sudden I was flying. Then they would land uphill, so they could stop the plane. It was always an adventure,” Bowler said.

When Bowler left Nepal, he spent three months traveling around the world by himself. Bowler met his father and brother in Ireland to visit relatives as his last stop before he went back to teaching. When Bowler got back to the United States, he substitute taught for a little while and then was re-hired by BSM as a part-time teacher and part-time dean in 1991.

This is Bowler’s 31st year of teaching at BSM, longer than anyone except Sister Jeanne, Social Studies teacher. During his 31 years, Bowler introduced the Honors Precalculus and AP Statistics classes to BSM. He’s taught nearly every math class that BSM offers, but his favorite is AP Calculus AB. “It is the first exposure to really big ideas. They’ve been hearing for years ‘you’ll use this in real life’, and now [students] finally see how this is real life,” Bowler said.

At BSM, Bowler is most known for his super quizzes during class. Many years ago, former building sub Colleen Schraeder, dean Mary Andersen, and Bowler met in the Commons each day to do the super quiz. “It somehow became everyone against Bowler and I would lose everyday,” Bowler said. Eventually, Shrader left BSM and Andersen’s free hour did not match up with Bowler’s, so Bowler made it a part of his classes. Now, whenever Bowler finishes a lesson early, his students compete in answering the super quiz of the day.