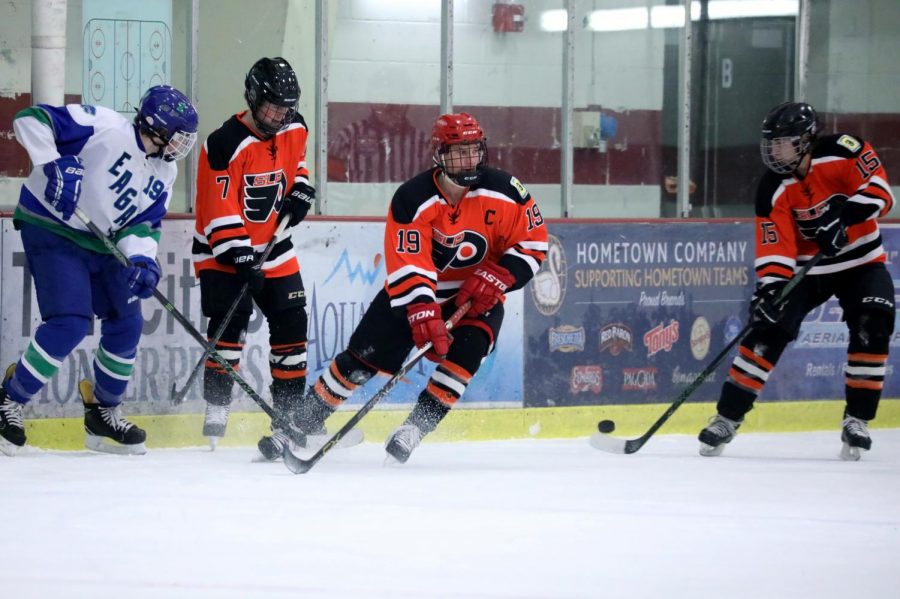 The Flyers are a hockey team formed by the St. Louis Park Hockey Association in association with Benilde-St. Margaret’s in 2009 to provide students with a recreational, less-stressful alternative to the BSM JV and varsity hockey teams. The Flyers, usually entirely comprised of BSM students, play at the Junior Gold level against other rec teams. Only a year after their initial creation, they went on to win the State Championship.

Johnny Khalil, a former player for the BSM Red Knights, returning Flyer: It’s great hockey, stress free, and they could be good enough to beat some bad JV or varsity teams. You are just playing for fun. You have fun playing the game you love and you are not as stressed. Varsity is very stressful; you need to manage your time better, the competition level is higher, but Flyers is less stressful and more fun.

Ken Pauly, BSM varsity head coach: It makes it easier [for me] because you know they [players who have been cut] have a place to go. They can still play with their friends on the team. Not everyone chooses to play for the Flyers. Cutting people is one of the hardest things to have to do as a coach, but it’s life. Everyone gets cut from something. Some take it harder than others, but once they get over the initial disappointment, they can rediscover their love for the game.

Caelan Woog, first-year center for the Flyers: The Flyers exist because Junior Gold is considered “youth hockey” which is played through your city’s association. Since BSM is a private school, they don’t have a particular association that they can allow their students to play Junior Gold through, so they have come up with an agreement with the St. Louis Park Hockey Association to form a team of BSM students that will be eligible to play Junior Gold through St. Louis Park’s hockey association. Although it is through SLP, it is made up almost entirely of BSM students.

Ken Pauly: A chance for the guys to get back to playing the game for fun. It’s pure fun. A lot of the time you have to deal with the BS surrounding programs but this team is meant to be all for fun. It’s just meant to be fun rather than a competition against others.

Amy Murnan, mother of existing player Rory Murnan: I think they exist for people who either don’t want to play at a competitive level or can’t. It gives them an opportunity to keep playing.

Theresa Deterding, mother of two former Flyers: When you have played a game since you were 3 or 4 years old, you aren’t ready to give it up while you’re still in high school. I am grateful for Flyers; it provided my boys with more years of playing hockey and more memories with their friends and teammates.

Tommy Anderson, third-year player for the Flyers: I got cut from the Benilde varsity team, and it was probably best thing that could have happened to me.

Ken Pauly: [Getting cut is] apart of moving on; I don’t regret my past decisions. It ends for everyone. It can end for you from being cut by a team or at the end of the State Tournament.  We encourage guys to consider trying out again, but it doesn’t happen a lot.

Jay Biwer, former Flyer: It isn’t as stressful as BSM hockey, but you can put as much stress on it as you want. It’s still hockey, and it’s still competitive every single game.

Riley Burns-Goetzmann, a former hockey player who was cut from the 2017 team and his brother played for the team last year: The Flyers have players from Benilde hockey; the boys have nothing to lose and a couple studs that were cut from the Benilde team.  Leonard, Coughlin, and Khalil were some of the best players for Red Knights. The Flyers have the best sports program at Benilde.

Ken Pauly:  It bothers me that people try to pit the teams against each other. They were originally created to support each other.