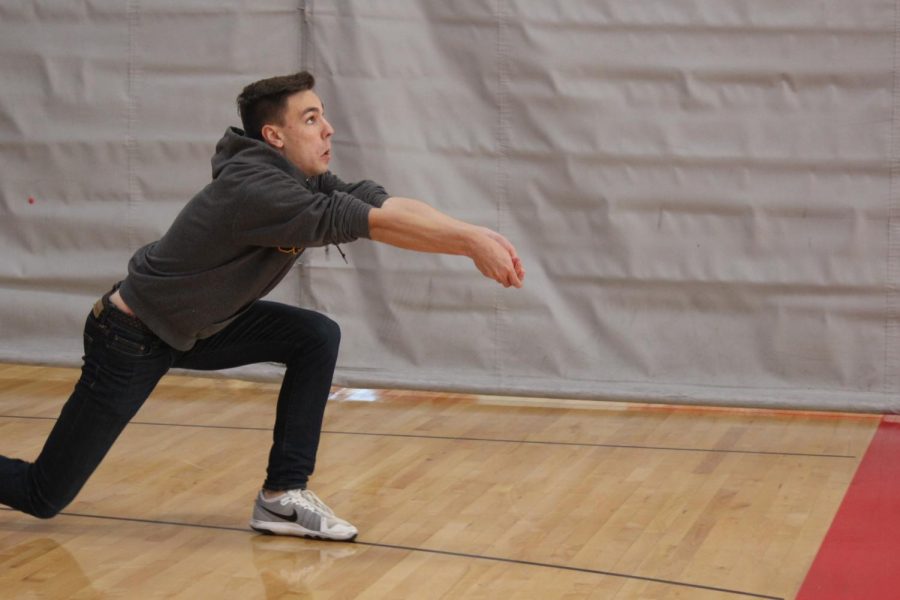 “Newspaper, center of the field. Everyone else, sideline,” Coach Hanks barked as the captains finished leading the football team in stretches. Looking around, I realized I was the only person on the team not wearing red, white, or gray. I was wearing a solid blue sweatshirt which, apparently, isn’t ok to wear to football practice. After lecturing the team about letting someone onto the field with a blue sweatshirt, all 38 varsity players thundered past me because of my choice of attire. Clearly, I’m not cut out for sports.

As someone who spends his time skiing, acting, and singing, the idea of being a varsity athlete had never even crossed my mind until I was trying to think of a way to get out of my comfort zone. Everything about being on a sports team made me cringe; from football players walking around with their chest puffed out, bragging about their height and weight, to the volleyball team screaming incessantly every time anything, literally anything, happens. Naturally, I decided I would be a varsity athlete for a week and practice with five of BSM’s fall sports.

I started out with volleyball. Easy, right?

Wrong. My forearms were burning after five minutes of passing (not bumping, I was quickly corrected for calling it that). While playing pepper, the girls had no mercy. They were spiking the ball full strength towards me or doing a short hit over the net and making me run for it. At the end of the practice, the team was scrimmaging and the coach had me go in back center, the serving position. The rules were that the losing team had to run. I was nervous and my arm was sore from the probably 200 serves I had already done at practice. Across two games to seven, I only made the ball over the net three times and made my team run twice.

From volleyball I moved onto football. After making the team run (anyone else see a pattern developing?), I did some receiver practice as the league rules prevented them from issuing me pads. Although I am a terrible at catching footballs, I was able to make a few good catches and not embarrass myself too much. After watching Percy the trainer straighten a dislocated finger, which was gross but also cool, the team began scrimmaging. Since I didn’t have pads I watched the scrimmages and talked with the players while they puffed their chests and talked about how they were 6’4” and 240 pounds. After being barked at to run a few more times by Coach Hanks, I left my day as a football player much less tired than I imagined I would be.

Next up was girls basketball during one of their free hour workouts. I figured I would do alright at basketball since I had played in sixth grade. However, not playing for six years left me pretty rusty in my basketball skills. Luckily we played five on five on five, which allowed me to take lots of breaks and the team could tell me what I was doing wrong. Every time my team had the ball I would hear Gabe Alada yelling for them to give me the ball so I could take a shot. When I finally had an opportunity, I jumped up and lobbed the ball towards the hoop. The ball soared through the air and fell to the ground a few feet from the net. Shortly after, the coach said we had to make 10 free throws before we could leave. I made two then gave up and went home to recover for my next sports.

My final day of getting out of my comfort zone I went to two sports practices in one day: guys hockey and girls cross country. Walking into the weight room at the beginning of seventh hour, I saw exactly what I expected to see. The music was blaring. Some of the team was intensely working out while others were attempting to play basketball, but over half of them were walking around shirtless, flexing their muscles to show off to all who walked by. The trainer paired me up with Jordan Roo. Since I could only go for eighth hour, Jordan had me do all all of the hard exercises and skip the easier ones to give me an idea of what they do for two hours of the day. I was able to do most of the exercised they did, but had to use much lower weights and did much fewer reps. The only problem was that it was leg day and I had to run with cross country after school. By the end of the hour, my legs were on fire, but I reluctantly walked outside the wrestling room to join girls cross country.

The hardest part of cross country was that I overestimated myself. The girls were on a rest day after a big race and so they had the option to go three, four, or five miles. Forgetting that I hadn’t consistently done cardio since playing on the white team for soccer in junior high, I told myself I would run four miles. I started off strong, keeping pace with some of the better runners, but by the time I reached the point to turn back for the three mile run, I was read to quit right there. I had to sit down and take a rest for a minute before running back to school with all of the girls who had actually paced themselves for three miles. My legs almost gave out as I neared the patch of grass where the coaches were waiting. After my overexertion of my legs at hockey and cross country, I winced every time I tried to move my sore muscles for the next few days.

Although all of the sports I tried were drastically different and I wasn’t very good at any of them, all of the teams welcomed me in a variety of ways. The teams were hard working and dedicated, but still were able to have fun while participating in their sports. I know I will never be a varsity athlete, but the acceptance and encouragement I got from the teams I practiced with showed me to not be afraid of putting myself out there and just trying things I may not be good at.