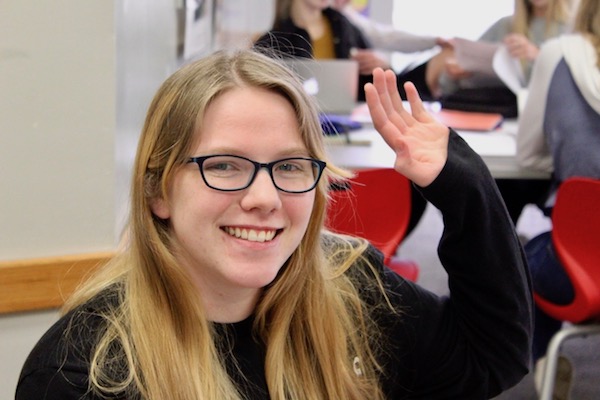 Schuldt tries to participate in class and raise her hand more.

Peyton Schult speaks up in class

An everyday struggle of going from class to class throughout my entire high school career is the discomfort I feel with participating regularly in class. I’ve been told by my parents and teachers alike that I have a naturally quiet voice and demeanor, and I often can’t think of anything interesting to contribute to classroom discussion, so the idea of spending a week making an effort to contribute in every class was extremely daunting.

During particularly engaging classes where participation is either mandatory or encouraged, I tend to find myself overthinking what I want to say, and when it’s time for my contribution, the words leave my mouth in an awkward, stuttery mess.

As I moved from class from class this week, I made an effort to contribute at least one thing during each of my classes. It seemed easy enough at the beginning, but I was hit with the terrifying realization that I had absolutely nothing to say more than once. I’m not sure if I would necessarily say that this week got easier as it went on––because there are definitely certain classes that are not conducive to quick, intelligently-worded contributions.

Overall, I would call this week a success for sure. During this feature experience, I realized a couple of things. First, it’s not necessary to have an entire verbal essay planned in your head in order to make a contribution to a class discussion. Most times it’s okay to say something along the lines of, “I agree with that and here’s why.” Second, even though there are definitely a few classes during which it is extremely easy for me to contribute, I’ve noticed that my ability to find something interesting to say is entirely dependent on the subject of the conversation. Lastly, participation grades definitely help me to force myself to participate. Additionally, it is incredibly difficult to stay completely silent in a foreign language class made up of five people (Thank you, Latin Five).

It is definitely important to regularly contribute during class. Not only does it allow you to gain a nice participation point or two, but it also allows your ideas to be heard. I would argue that that’s the most important part of contributing in class because there is no guarantee of another chance to share your idea or opinion on a specific topic that just happens to be the subject of class. But class contributions aren’t limited to just opinions and thoughts—you have the ability to ask questions, and though you can ask your teacher privately, there might be other students in your class with those same questions. Overall, the benefits of contributing in class this week definitely outweighed the negatives, and I will make an effort to contribute more, for sure.