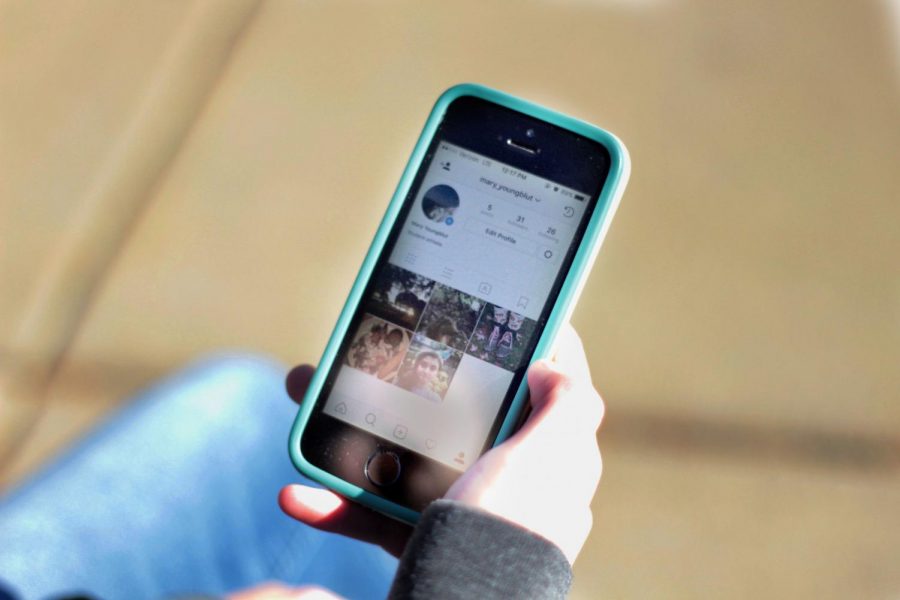 Youngblut uses social media platforms, such as Instagram, for the first time.

I tend not to post on social media accounts because I have attended the speakers who warn me about my “digital footprint” and have no interest in sharing what I did each day or what I had for lunch. Twitter and Instagram seem like futile attempts to gain attention, and while this may not be true, I have never understood the appeal. Stepping out of my comfort zone, however, I decided to join the ranks of millennials and “Gen Z” and get two incredibly involved forms of social media: Twitter and Instagram.

To start, I created my accounts linking both with my phone number and made my usernames a simple “mary_youngblut”. It took me over an hour as I tried to think of a bio for both and a first tweet and Instagram post. For Instagram, I took a self-obsessed “selfie” with a birthday hat on, wrote a line for the caption and added lots of colorful, fake-looking filters. For Twitter, I turned to my favorite movie and added a quick gif. Suddenly, I was thrown into a sudden thirst for validation by my peers.

As more people began to follow me, there was a pressure to produce interesting content. The amount of thought I had to go through to get across my sarcastic caption was incredibly difficult. I have never understood the need to share my life with others, but suddenly it became something I had to do. I had a list of daily items that I was supposed to accomplish on my accounts, but they proved to be more of a chore than enjoyment. As I attempted to fulfill these assignments, I found myself getting out of my comfort zone in my real life as well. I went outside for every single Instagram post and tried to make my Twitter as interesting as possible. I went to my basement, usually reserved for D&D with my brothers, and started playing Mario Kart just so I had something to tweet. I felt like each post had to portray an interesting meaning. There had to be a reason I was posting, and it couldn’t just be this challenge.

By not being able to tell anyone about this project, I felt like I was actively seeking attention and wasting someone’s valuable time. Who out of my fifteen followers actually cared about my mom’s salad? Who wanted to see me take up their feed? With each post, it felt like I was screaming out into the world, “I’m sad and alone, and I need you to tell me I’m doing something right with my life.” [I don’t actually feel that way.] I know that social media is used for many different reasons, and I know that many people would never post as often as I did that week, but I felt completely out of place.

I have a connection to people I rarely see, while I doubt if my like or retweet actually means anything to them. I understand how social media can waste a person’s time and entrance them in a series of unnecessary information, but I wonder what percent of social media is procrastination and what percent is a wonderful means of connecting to a broader world. The world was at my fingertips and honestly, I was terrified.