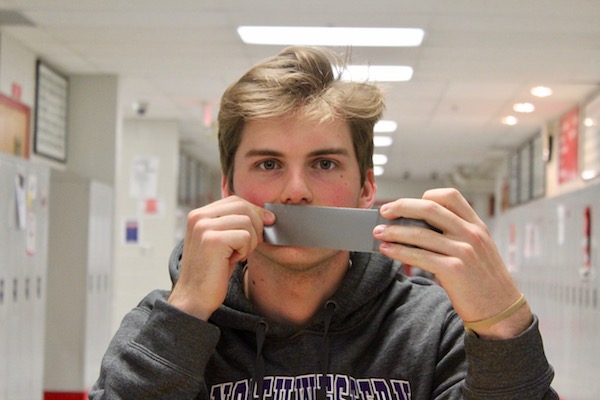 Larson doesn’t state his opinion when talking to others.

In an outspoken world, it’s a rare moment when one can find ease in shutting up. I chose to spend a week chasing that ease. I never did find it.

I began my time outside of my comfort zone on a school field trip. It had been decided that I was not to speak out on any issue, lead anyone else, or declare my opinion in any way. I was confident that I was up to the task as I boarded the bus to the University of Minnesota’s Masonic Cancer Center. I first chose to go with the blanket-silence route. I decided that I couldn’t make my opinions known without speaking and that if I decided in the morning that I wouldn’t talk at all that day, that I wouldn’t be tempted.

I was wrong. It takes an extraordinarily patient and strong person to be able to blindly follow their group after taking their fourth wrong turn without bursting from stress and anxiety. I made it about an hour into the field trip before I finally decided that no journalism experiment was worth walking past the same elevator bay for the fifth time. After I took over as navigator, I basically gave up on keeping my thoughts to myself for the day and decided to resume my challenge the next morning.

The following day went slightly more according to plan, but there were still more slip-ups than follow throughs on the holding-it-in front. I realized only a couple hours into day two that day one wasn’t a fluke caused by a field trip––I was genuinely struggling not to share what I was thinking. It began to make it difficult to concentrate in my classes as I was focused solely on keeping my mouth shut. I quickly gave up on day two as well.

The next few days came and went in largely the same fashion. I returned each day with a renewed vigor, and I left with an ever-growing knot in my neck. Finally, the experiment was coming to a close on the last day, and in a last ditch effort, I chose to put everything I had into my last two periods.

For whatever reason, this final hour and a half was different from the rest of the time I’d spent stressfully reigning myself in. I felt an eerie sense of calm as I watched all of the interactions go down around me, without my input. I found myself listening intently, and I found that almost everything I was so desperate to say was said by someone else anyway. It took me until the final minutes to find the one idea that gave me peace outside of my comfort zone: that quite frankly, my opinion isn’t all that special.