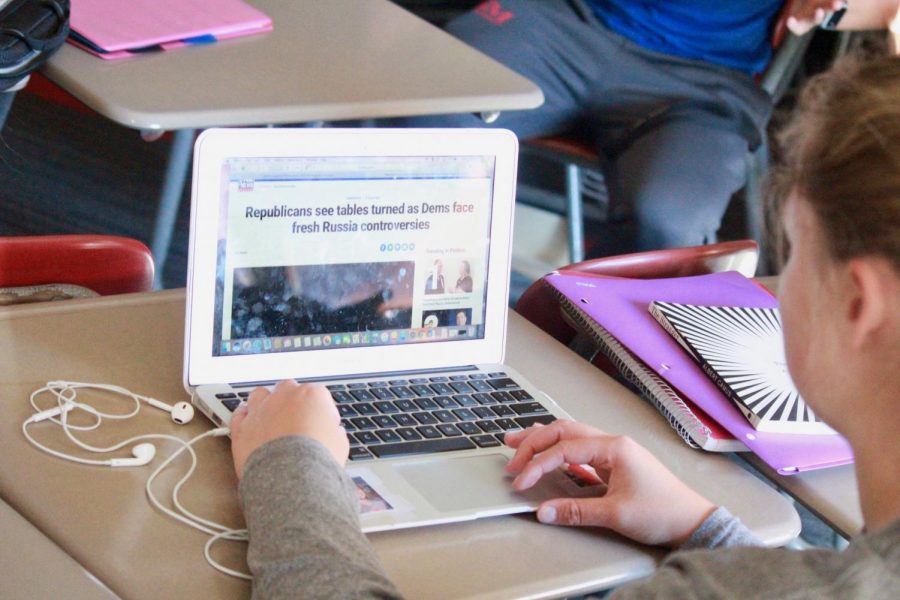 Letscher and Lundberg only get their news and social media from sources like Fox News.

One of the very first things I do in the morning is check my phone. However, when I wake up, my screen isn’t only filled with Snapchats and texts, it is flooded with news alerts from CNN, the Washington Post, the New York Times, and several others, all telling me notable events either nationally or internationally that happened while I was sleeping. After catching up on these alerts, I move on to my daily email newsletters: the New York Times and the Skimm.

I like to think that I am at least somewhat tuned in to the world around me. I pay attention to politics, read New York Times and Washington Post articles in my downtime. However, as you may have noticed, many, if not all, of the places I get my news from are at least somewhat left-leaning. While this fits my personal ideology, it can lead to me only reading perspectives I agree with. It doesn’t challenge my thinking very often. So, I decided to challenge myself. For one week I only consumed right-wing news, primarily Fox News, in order to put myself out of my comfort zone and shift my perspective.

This entailed more than I originally imagined, as it meant that I wouldn’t be able to go on any of my social media. Facebook is filled with news stories, and I basically only follow reporters and news outlets on Twitter. So my friend made me a new Twitter which followed only right wing journalists and figureheads. I also couldn’t read my daily newsletters, so I replaced them with Fox News First. Finally, I read at least three full Fox News articles a day.

I’ll be honest, I thought the week would go a lot worse than it actually did. When it came to the news articles, they were relatively unbiased. They gave the facts on, for example, an executive order about healthcare and mentioned what the opposition reaction was. However, I still didn’t feel like I was getting the full story. Fox News articles are shorter than most I typically read, so maybe it was just because the articles tended to be brief, but I felt like the articles only touched on the implications of the actions from the Trump administration.

One thing that was not brief, however, was Fox News’ coverage of Harvey Weinstein and the NFL protests. They were the top stories on almost all of the newsletters sent out that week. It was interesting because, while I couldn’t compare it to left-wing media outlets’ coverage, it felt more thorough than what I would’ve seen elsewhere. However, that also meant that both issues felt overexposed. Yes, they are both important, but there was also other news going on that I felt should’ve overshadowed them.

The biggest difference in news coverage, overall, was just that I was reading less. While it was interesting to see coverage from the other side, by the end of the week, reading the articles took a lot of effort. While the facts were the same and the coverage of any given issue was similar, it is still easier for me to read news outlets with a slight left-leaning bias instead of a right-leaning bias.

The most interesting part about the week was reading the editorials. The opinions that were expressed were almost always contrary to my own. Oftentimes, the language in the editorials was harsh and sometimes downright offensive. Nevertheless, it made my think about my own opinions more. It made my actually formulate my personal opinions on any given issue before I read an editorial I agreed with. And reading editorials I didn’t agree with helped affirm my belief in my opinions, while also challenging my world view.

Overall, I’m glad that I spent a week only looking at right-wing news outlets, but I wouldn’t do it again. I definitely won’t add Fox News into my rotation of news sites I check during the day, but I may start checking out their editorials every so often. Seeing other perspectives on certain issues is important to fully understanding that issue and spending a week reading Fox News helped me remember that.

Every day, I start my day in a very similar fashion. I wake up, silence my alarm, then scroll through all the CNN breaking news updates on my phone. After I complete the list, I listen to the Daily, a podcast run by the NYTimes that goes through one of the main news stories of the day. I listen to that while I get ready and while driving at school. When I arrive at school, I go through my email which consists of three daily newsletters: The New York Times, Skimm, and Buzzfeed. Then throughout the day I periodically check the Washington Post.

I like staying up to date on news and politics. I see it as somewhat of a hobby. I enjoy debating on upcoming policy and watching CSPAN live, so when I was told that I had to go out of my comfort zone and only consume Fox News and scroll through a right-wing Twitter feed that a friend made for Abby and me, to say the least I wasn’t thrilled, but I was up to the challenge.

The rules were simple. I could only get news from Fox News or the Twitter feed for a week and I had to read three full Fox articles a day. That automatically meant I couldn’t go on my Facebook, due to the news I follow. It also meant that I had to turn off my breaking news CNN updates and replace them with Fox ones.

I wish I could say that the week was easy, but it wasn’t. I know that we all continue to hear how much more divisive politics have become and how news has seemed to follow that trend, but my throughout my week reading right-leaning news, it really ingrained that fact. I decided early on to only spend a few minutes on the Twitter feed, because it was honestly really sad. I would have a feed filled with how horrible the NFL protests were and how every democrat who has accused Bill O’Reilly or Donald Trump of sexual harassment were hypocrites, because of Harvey Weinstein. The whole time I was just screaming internally that it doesn’t matter if the harasser was a Democrat or a Republican because sexual harassment is bad, period!

The first full article from Fox News I read was “RIP Boy Scouts of America. You were great for 100 years”. I would have never even clicked on an article with that title if I hadn’t had this assignment,  let alone read it, but I wanted to try to have an open mind.

The article was an opinion of an Eagle Scout who didn’t like the new policy that would allow Girl Scouts to join the ranking system so that they could reach the Eagle Scout level. As a Girl Scout dropout, I was curious to see his take on what I thought was a really cool new policy.

I read the article. I didn’t agree with the article, but I had to take a deep breath and suck it up. It’s an opinion piece (even though at first Fox labeled it news and then changed it to opinions later) and everyone is entitled to their opinion. I think that attitude can summarize how the whole week went. I just had to read the articles and deal with it.

The basic news I got from Fox was fine. I knew that Trump had signed an executive order on healthcare, and I knew he had released his tax plan (not his personal taxes, a lot of people are still waiting on those) but I had a hard time fully understanding them. Fox’s articles were short and leaned right, while I knew that if I was reading on the Post or the Times it would have been long and broke down each order or plan. Not to mention I find the web design of Fox News really ugly especially when compared to other news sources.

By the time I had got to the end of the week, I just couldn’t shake this one idea out of my head: Was every news source that wasn’t Fox News considered left leaning and biased to deep conservatives? Deep conservatives are often quick to dismiss NYTimes, The Post, MSNBC, NPR, PBS, BBC… the list can go on as “fake news,” so I can only really think of one source that would be considered real news in their eyes: Fox News. I think if this week has taught anything, it is to respect the amount of power and authority that Fox News has over conservatives.

When the week finally came to a close I was extremely relieved. Was I happy I went out of my comfort zone? Sure. Would I now include Fox News into my rotation of sources? No.