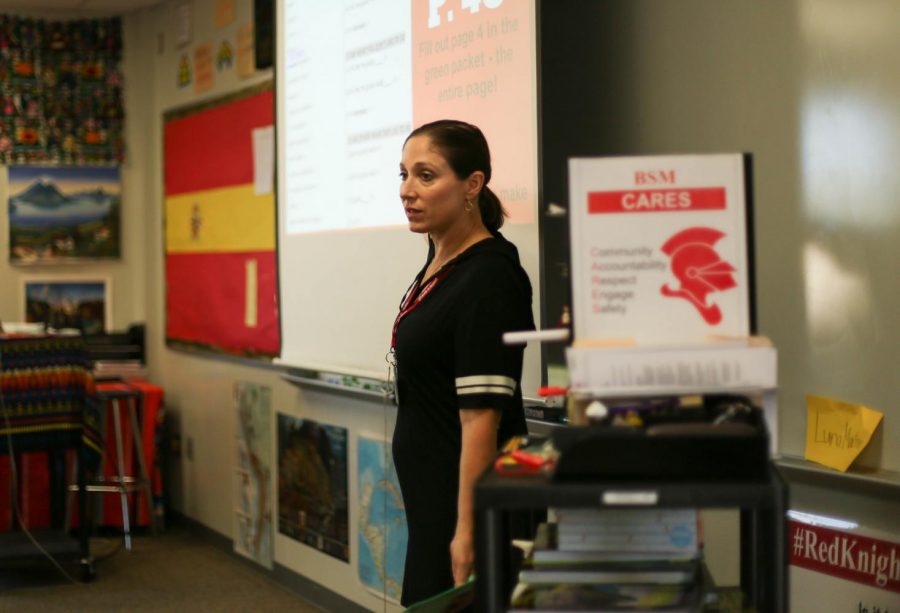 Terrell was as Wall Street trader before becoming a teacher.

Most teachers have a background in education, but one of the newest members to the Benilde-St. Margaret’s community has a background far different from anyone else. Alison Terrell, now a BSM Spanish teacher, started her career as a Wall Street trader.

Terrell’s first job was working at the Madrid Stock exchange for about two years, but then she had the opportunity to do the same line of work in Chicago working for a company that was located on Wall Street. After ten years of Wall Street, and along the way becoming a mother of three, she realized that she couldn’t do both. “When you are a mom and you’re getting up in the middle of the night and [you have to be] at a trading desk at 5:30 in the morning, it is really hard, so I retired from Wall Street,” Terrell said.

Even though she didn’t see herself following in her parents’ footsteps of being an educator, her journey led her to doing that exact thing by becoming a Spanish teacher. Growing up as a child reading Cillian dialect with her grandparents, which is more similar to Spanish than traditional Italian, to having Spanish being one of her two majors at Boston College, Spanish was always something she loved. “Life is like a full circle and I feel like I have came back to my roots,” Terrell said.

Her teaching career started at Minnetonka high school, where she taught for three years. Moving to a teaching position at BSM seemed like a natural progression because of her Jesuit background at Boston College. “Boston college is Jesuit, and I am Catholic so coming to BSM feels like I’m coming home,” Terrell said.

At BSM she teaches three level one Spanish classes and three level three Spanish classes. Terrell’s goal in the classroom is to have an environment where students are having fun but learning at the same time. Her goal as a teacher is to become a mentor to her students in Spanish, as well as teaching life skills. Even though she has only been at BSM for a short amount of time her favorite part is the sense of community. “Benilde-St. Margaret’s is one big family,” Terrell said.