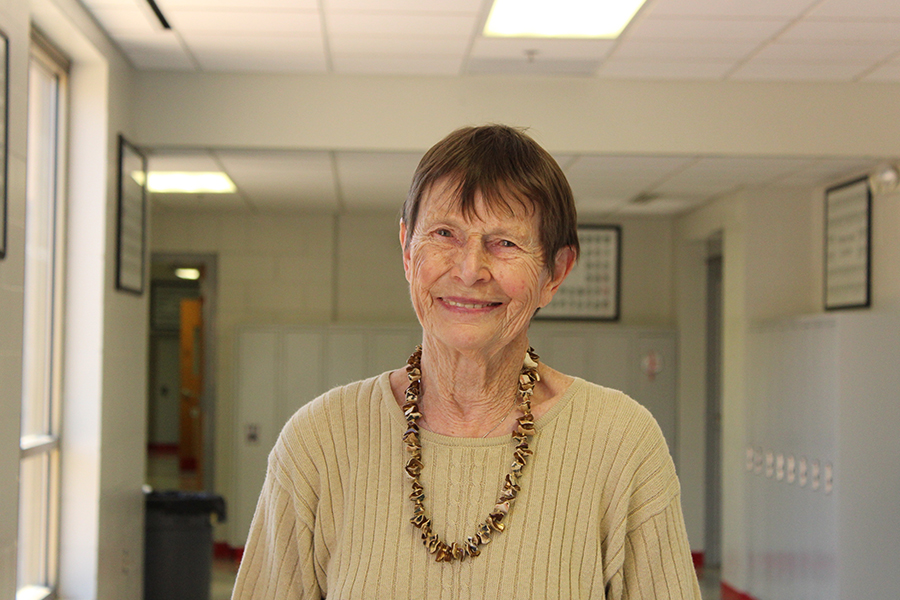 Elaine Barber is not only a substitute teacher and faith filled woman, but a friendly face to see around BSM.

With “Substitute Teacher” as just one of her many titles, Ms. Elaine Barber never fails to surprise students with her will to go out of the way to better the BSM community.

Barber originally gained substitute experience from teaching in long term sub jobs: twice in Earth Science for a woman on maternity leave and twice in Physical Science for Ms. Lindsey Novak here at BSM. While Barber’s could sub anywhere, she choose BSM. “The main reason I landed [at BSM] is because when I taught at St. Therese in Deep Haven, people my age were starting to have grandkids. I taught grades sixth, seventh, and eighth science as well as gym classes for grades one through eight. I coached three soccer teams as well. I loved it, but [I] wanted to go where the people I had become so close [to] were sending their kids and grandkids. Not long after, I began my teaching career here at BSM,” Barber said.

There is much to do at BSM, but Barber states that her favorite thing to do here is to work with the students. She loves the good spirit of the pupils along with the atmosphere as a whole. “I have been here 13 years now and have only had to ask two kids to leave class. I think that says a lot about how wonderful both the children and community are here at BSM,” Barber said.

As a substitute, however, her job is quite unpredictable, which Barber indicates as the biggest hardship that comes with her position here at BSM. It is a common occurrence for her to receive a phone call at 6 a.m. asking for her to come that day. Barber manages to balance her work at school along with having four sons, a dog, and working in several different leadership positions.

Her decision to choose education as her profession occurred in college when she decided to double major in Physical Education and coaching, along with science. “After I finished teaching at St. Therese, I went on to teaching at the Breck School where I became a full time science teacher. I quickly became very passionate about having my homeroom students volunteer to participate in daily chapel. I think this was when the school first realized my passion for faith. I was called into the office my first week of the new school year at Breck and was asked to give up science teaching and instead take on middle school religion classes. I stayed in this position for 16 years or so as I taught sixth, seventh, and eighth grade students religion,” Barber said.

As a servant leader, Barber believes that it is necessary for students to see a different side of the world than the one they are living in so that they can provide better service to the environment around them. “I began taking the students for the school day once a month to different agencies and day cares in need of our assistance. I worked a lot in the inner cities of Minneapolis and St. Paul with my students as we went out and served,” Barber said.

After doing so, she became even more involved in the church, becoming a Sunday school director, a head of several youth groups, and an outreach chairman at Trinity Church. “I spent 90% of time at my Excelsior church group where we paired our kids with kids from inner city and we’d do Halloween and Christmas parties, played basketball and games, and ultimately things that would build the kids’ relationships with one another. What the students didn’t know at the time was that I had an external and internal call to become a deacon as I found this was a perfect bridge between the world and the church,” Barber said.

Barber has always believed that our lives should be coordinated with our religious beliefs. Barber stayed in her deacon position for nearly 10 years as she served at Trinity Church, Breck, and a church in Richfield. When she retired, Barber had time to finish her degree as a priest, and soon she had students she had taught in the past calling her to be the priest at their weddings and baptisms.

Ms. Barber is very active both in and outside of BSM’s walls, and many aspects that have led up to being the truly inspirational woman she is today. It is no secret that Ms. Barber truly is an extraordinary woman and does an outstanding job working here at BSM