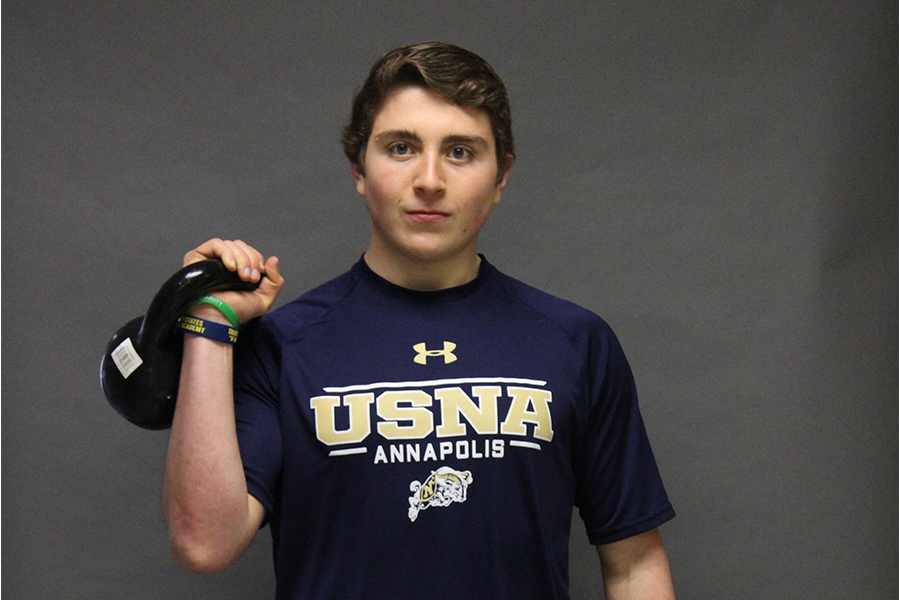 Sean McCullough impacts people on and off the field

Senior Sean McCullough is certainly tremendous. He works out about three times each day on average, prepares all of his meals on Sundays, and values a strong work ethic above all else.

Sean McCullough came to BSM in 8th grade due to a change in his old school’s curriculum, and he was initially a joking presence. “8th grade year with Ms. Olson I was trying to joke around as much as I possibly could–I was like the ultimate screw-around, jokester type of guy. I remember hanging out with different groups of people to mess around,” Sean said.

Now that he has matured, he doesn’t joke around much anymore, but he instead feels that the most valuable trait that one can possess is that of work ethic. “There’s nothing that can replace putting all you have into what you do,” Sean said. “It’s just all about how much time you put in, what you’re willing to do, if you have the discipline to keep doing it, and the perseverance to get over the obstacles while you’re doing it, [and] that all adds up to create something unique,” Sean said.

Sean does not just talk about how much he values a strong work ethic; he embodies it. He works out for at least 2.5 hours every day to build up as much strength as possible. He woke up at 4:30am during the swim season to get the extra workout in before school, and he is now doing Crossfit. “[I do] anything I can to challenge myself, [which involves] lots of body weight, [and] anything to stimulate my muscles and develop, [to] reach as much intensity as possible,” Sean said.

Sean loves working out–that’s for sure–but he has also been through tough times where he has not been able to exercise his passion. He saw his high school football career come to a screeching halt due to multiple concussions during his senior season, and this setback ended his opportunity to play football in college. “[Having multiple concussions] taught me getting through tough times, reaching out to as many people as possible, [and] using as many resources as possible to get through the obstacles and get better. It was about breeding the successful mindset in order to overcome obstacles,” Sean said.

In order to harness the competitive drive in a new way and to expose himself to new challenges to grow stronger as a person, Sean enjoyed joining the BSM cross country and boys’ swim teams during his senior year to make up for the lack of football in his life. “I figured I needed more of those challenges and competitions against myself, and I knew [that] swimming had a reputation of being extremely difficult. There’s never a better feeling than after practice in the locker room [when] you’re hanging out and talking about how hard practice was and about how you got through it, and that’s what drew me into swimming in the first place,” Sean said.

Another aspect of Sean’s life that is important to him is his self-sufficiency, particularly with his diet. He cooks every meal that he eats throughout the week all on Sundays, and he makes sure to put into his body what he thinks will help him to reach his full potential in all facets of life. “[Cooking my own meals is] really just learning to be independent and doing things on my own, and being able to prep my meals on Sunday takes a lot of discipline,” Sean said.

[Sean] understands that he needs to work hard to achieve his goals, and he is more than willing to do so. Sean always has a smile on his face, [and] he is friendly, approachable, and respectful to both his peers and adults.”

Next year, Sean will be attending the United States Naval Academy in Annapolis, and his drive to follow this path has come from the service that his family members have done for others right in front of Sean’s eyes. “My family in general has a strong sense of service–my mom is a psychologist, my uncle and one of my grandfathers serve in the military, and seeing all of them and all of their examples has really pushed me not only to serve my community but also to serve my country,” Sean said.

In terms of Sean’s future life goals for after college, he will serve the mandatory five years in the military after graduating from Navy, preferably as either a marine infantry officer or a Seal. After those five years, he would love to continue to be in the military and later to potentially open a crossfit gym. “I definitely want to stay in the military as long as possible after those 5 years and hopefully be in charge of [Marine Expeditionary Force], which is the whole big deal [and] is what I hope to be someday, [or] maybe a lieutenant colonel in the navy,” Sean said. “After I’m done in the service I want to open a gym because that’s what I’m interested in–maybe a crossfit gym.”