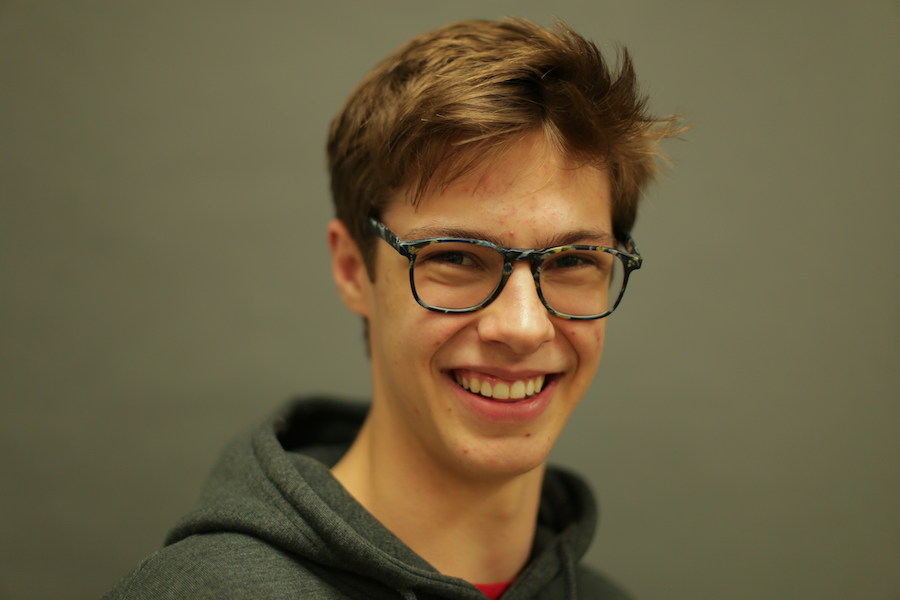 Colby Clinton brightens the day of every person he encounters.

Colby Clinton is a rare breed. He’s the friend everyone wishes they had and the kind of person that knows everyone. He’s rarely seen without his genuine smile and bouncing walk.

Colby is the perfect balance of an ambivert––he’s both an outgoing person and a great listener. “I feel like I’m kind of middle ground, probably more of an extrovert a little bit, but sometimes I’m an introvert as well,” Colby said.

Colby has de ned his high school career through trying new things and meeting new people. He has participated in a whopping 12 di erent clubs at BSM, as well as balancing outside activities like coaching basketball, being a youth minister, and playing piano.

His dedication to these clubs is just further proof of his uninhibited love of the school’s community. “[I’ve changed the most by] just expanding my horizons a little bit, as far as activities I’ve done. Freshman year I was involved in RKVC and then each year I’ve tried to make it a goal to add like two or three new activities,” Colby said. Out of everything Colby has tried, his favorite activity has been debate because “we get to yell at people and get away with it.”

Though it seems like having so much on his plate might prevent him from doing what he truly loves, Colby still nds time to enjoy his passions. “I like to ride my bike a lot. I like to go to new restaurants and explore the city a little bit,” Colby said.

He loves trying out new restaurants so much that he even lists food as one of his passions. “I’m really passionate about food. There’s so many good combinations of food, but I’d probably say popcorn is my favorite because it’s enjoyable any time of the day,” Colby said.

Along with food, Colby loves listening to music. “Food and music are what I’m most passionate about, probably. I like old man music, like 50’s and 60’s, 70’s music,” Colby said.

Because Colby is such a genuinely honest person, he prides himself in having nothing to hide. “I don’t have many secrets,” Colby said.

Colby Clinton never fails to make your day. That smile makes my heart warm. He is so kind and generous for no apparent reason. He’s not fake.”

However, he hides one special talent from everyone. “I can clap with one hand, so that’s pretty cool, but other than that I have no talents,” Colby said.

Like many of his classmates, he is unsure of what his future holds. “I just want to have my life together and have a job. I want to gure out what I want to do with my life, because currently I’m an undeclared [major] right now,” Colby said.

Though he may not know the speci cs, Colby is sure of one thing––he wants to be happy. “I guess just to enjoy life is a long term goal. Just let go and let God,” Colby said.

Besides happiness, he has something more unique on his bucket list. “I always wanted to own a school bus and convert it like into a little house. I’d travel around in it, like cross country. I’d make it a few days and then probably give up,” Colby said.

When Colby looks back on his years at BSM, he can’t pinpoint a certain favorite moment. Instead, he says that there have been special memories adding up over the years. “I think the most special [moments] I’ve had have been the really spontaneous ones, like I went to detention for like two days, not because I was in trouble but I just wanted to hang out there and it was really fun. I got to talk to the students and play games. But other than that, I don’t really have a specific one,” Colby said.

Most importantly, Colby is proud of what he has accomplished so far. “Would little Colby be proud of me? Of course. There’s no doubt in my mind,” Colby said.