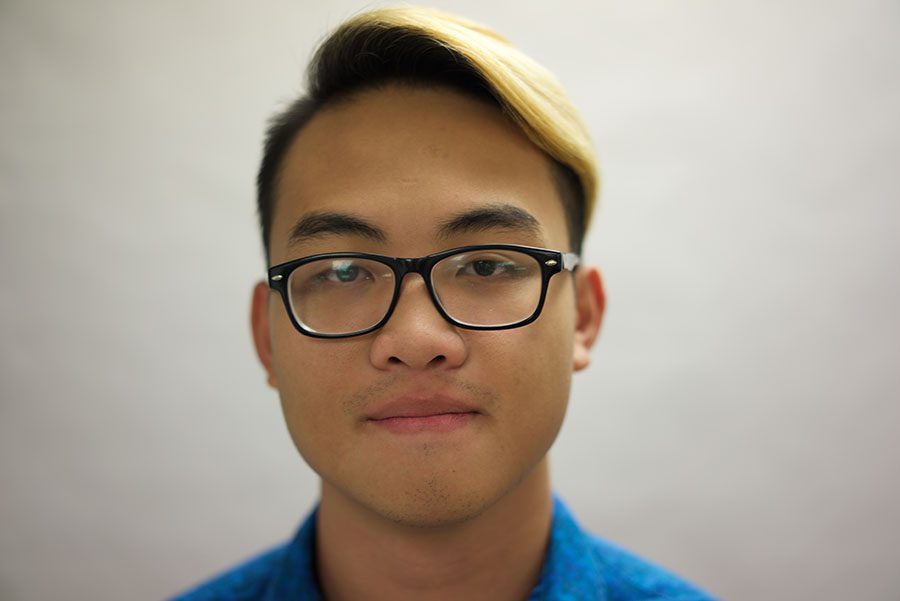 “I heard he solves problems that matter.” -Cormac Hayden

I’d like to start this ode to Minh Le off with the fun fact he told me at the beginning of our interview together. Fans normally have two modes, one for updrafts and one for downdrafts. If you’re warm, you use the downdraft, like a normal person. But, if you’re cold, you can use the updraft to pull the cold air up and mix with hot air, making the whole room warmer. I think this fun fact says a lot about Minh. Minh’s the kind of guy who wants to spread warmth.

Minh’s Facebook profile picture is him looking through a camera, and that image is pretty indicative of his life at the moment. He is currently working with his friends in film, and he attributes the start of this passion to YouTube. “I started watching YouTube because I watch a lot of travel videos, and out of all those videos, I enjoy the video that looks the best aesthetically: the shots, the music, the slow motion. I started to notice all of that,” Minh said.

Minh and his friends actually started a YouTube channel to showcase their videos. They’ve uploaded six videos under the name “BananaCabana.” While the videos that make the cut might be select, they offer a wide range of subjects. Featured are two concept music videos, two car previews, and one documentary. On their “Foals – Spanish Sahara [Concept Music Video],” one commenter praised, “This is so beautiful that it made me cry. You guys have a gift.”

+ At Chipotle, Minh orders a burrito with double steak (“Always double steak.”) and with everything but guac.

+ There are lots of people that inspire Minh, but G-Easy is “definitely one of them.”

Photography also played a role in his interest in the visual arts. His instagram handle is @theboyintheclouds. If you’re wondering why he’d choose such an ethereal name, all you have to do is browse through his 32 artsy posts to see that it’s completely accurate. “One day I scrolled through the page, and most of it had the sky in it. Apparently I take those pictures all the time, so I guess it just was ‘the boy in the clouds,’” Minh said.

As a result of his interest in visual arts, he has started a business, Make it Better Films, with seniors Cormac Hayden and Jake Lundell filming videos for businesses. “We do real estate videos, music videos, short films. We can do anything,” Minh said. Recently, they did a preview of the new DB11 Aston Martin for Morrie’s. Minh will be interning at Morrie’s over the summer.

A modern renaissance man, Minh also has some practice in coding, though he wouldn’t consider himself a coder. “My main passion isn’t filming per se, it’s just how things move. My main passion is to make money and to just have the rest of my life be fun. I want to make a company. In the future, the coding and computer science skills are definitely going to come in handy,” Minh said.

One simply cannot mention Minh without acknowledging his incredible style. Walking down the halls, a peer might wonder how he can always be so put together, but his clothing choices harken back to his appreciation for the visual arts. “I like things that look good: people that dress well, videos that look good, cars that look nice, those kinds of things. That’s how I started dressing better,” Minh said. As for stylistic influences, Minh’s fashion is shaped and influenced by the contemporary world. “I would say my style is very Asian and Japanese inspired. It is very modern,” Minh said.

After his internship at Morrie’s this summer, Minh plans to attend the University of Minnesota, where he might minor in film. “I’m in the design school right now, but I might switch to the business school. I’m going into graphic design. Part of business is making things look attractive,” Minh said.

When asked what others should know about him, Minh’s response pretty much sums him up. “I just want to have fun––the most fun possible––before I die. So if you’re doing something fun, hit me up.”