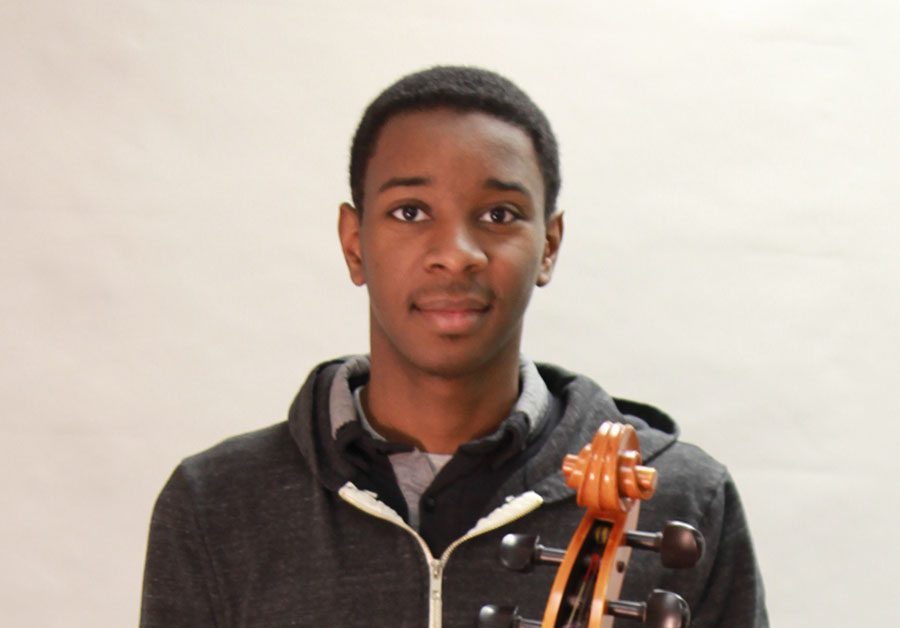 The left brain v. right brain debate argues that a person is either creative or analytical, but Evan Weatherly is proving that theory wrong with his expansive musical skills, and interest in math ad engineering.

Quantum mechanics. Cello ensembles. Electrical engineering. French immersion. Chipotle burritos. Evan Weatherly brings a range of conversation topics to the dinner table, but Evan’s mind is one of practicality. For instance, when confronted with the theoretical possibility of living anywhere in the world, Evan got stuck in an analytical nightmare, asking, “Where would I live, what would I do, where would I work, how would I go to school? I’m digging into this too much.”

He was digging too much, but I won’t fault him. After all, his career aspiration is electrical engineering. “I plan to get a master’s degree; I’m not sure if I’m gonna get a PhD. Because, chances are, the way the field is going, I’ll have to get a master’s in electrical engineering and get a PhD in something like quantum mechanics, or something like that, just to keep up with technology,” Evan said. This may seem ambitious; don’t worry, he knows what he’s doing. “You want that job security. It’s better to over-qualify and, you know, work out things later, than jump into the field and figure out you don’t have what you already need,” Evan said.

+ Evan says he is “like a soup. A soup is an inviting and warm dish.”

+ With ten dollars, Evan would buy a USB cable at Target.

+ Evan participates in the Jack and Jill program.

Evan’s interest in numbers and equations and other sciency things isn’t just a result of in-class experiments and projected salaries. He actually does what he loves at camps, with friends, and in his home. “[At] one of the latest camps I was at (Rose-Hulman Institute) called Project Catapult, I just built an amphibious bike with a group of six…while that wasn’t specifically electrical, it was still engineering,” Evan said.

Not everything Evan builds has a practical purpose. “I enjoy just tinkering and building things, even though they don’t have an immediate purpose. Like, no one needs LED strips around the ledge of your bed, unless, you know, you turn off your lights and you don’t want to stub your toe…I guess it’s kind of these experiments in electrical engineering that don’t have a practical purpose in the long run, but just help me learn what it’s all about,” Evan said.

Learning: Evan likes it a lot. And, he has dedicated his life to trying as many things and exploring as many interests as he can. One of these interests is the cello, an instrument he felt connected to the moment he picked it up. “I don’t know how to explain it, but my hands just kind of naturally went to where they were supposed to go,” Evan said. “The more I play it, the more I love to play it. I plan to play it in college as well…I was seriously considering going to a conservatory school like Northwestern for a while.”

Perhaps Evan’s love for music stems from the fact that the mechanics of music are rooted in math. But, perhaps, the passion is a product of music’s complete separation from the laws of science. “It does connect to math, but I don’t know, it just helps me be musical––I don’t even know what that’s supposed to mean––but…musical,” Evan said.

Evan’s musical side hasn’t lost to his engineering side; he has been a part of two Minnesota youth orchestras in the Twin Cities, the Minnesota Youth Symphony and the Greater Twin Cities Youth Symphony. “I really enjoy seeing what it’s like to play in larger orchestras because my middle school orchestra was always so small, so being part of that bigger group was also really fun for me. On the other end of the spectrum, you’ve got MacPhail, and private lessons, and, you know, solo recitals,” Evan said.

Beyond engineering and music, Evan is also dedicated to his foreign language education which serves a thought-out, practical purpose. “I never questioned why I was learning French in [Normandale French Immersion Elementary School], but once I got to high school…to go into engineering, I realized the only language that really lined up with that was Chinese. So, that’s why I switched to Chinese when I got to BSM,” Evan said. “And it’s hard. It’s like learning two languages at once just because, you know, every other language has Latin letters, but Chinese uses characters…I’m getting there.”

In the end, Evan is probably cooler than you ever will be, and he’s spent his time as a high school student wisely. He looks hopefully toward his future at Rensselaer Polytechnic Institute doing lots of science and playing lots of cello. “I’m looking forward to whatever college is all about––looking forward to stepping out of one world and into the other,” Evan said.