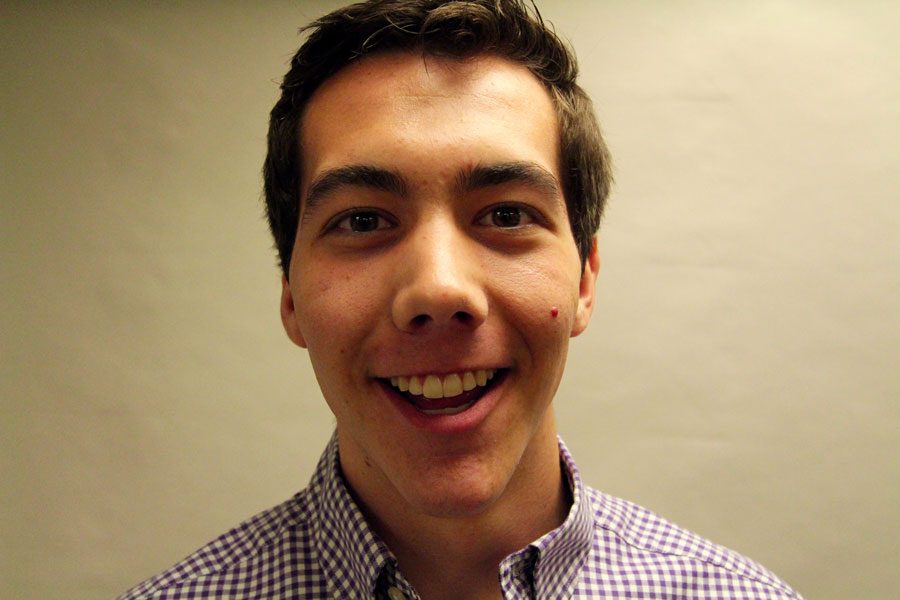 “He tries to connect and relate with the people in other countries on a very personal level...He walks with people and accompanies them on their journey, listens to their stories, plays soccer with them. He does whatever he can do to be with them.” -Matthew McMerty-Brummer

Ben Hoxie hopes that when people first meet him they will consider him a nice, caring person who works hard; that is exactly what most people think after just a short period of time with this passionate and empathetic senior. Most decisions that Ben has made are because he wants to meet new people and gain a greater understanding of what other people think and experience each day.

When it comes down to it, Ben pursues activities that give him the chance to become a global citizen and a more understanding person. “[I am passionate about] trying to understand why people have the thoughts, opinions, and beliefs they do and try to learn about it; that is a part of [being] accepting,” Ben said.

+ Ben races his Subaru WRX on a contained track in Autocross.

+ Ben prefers Qdoba over Chipotle to fulfill his Mexican-American cuisine cravings. When there, he keeps it simple, usually ordering a plain quesadilla

Ben goes on mission trips as a way to pursue his goals of understanding other perspectives and gaining greater cultural awareness. During the past two summers, Ben has gone on both of the BSM mission trips offered. The first was after his sophomore year when he went to Honduras and the year after that he went to Gua- temala. These mission trips had a profound impact on Ben: he realized how just important service is to him.

During his second mission trip, Ben and the other students stayed with host families. This was Ben’s favorite aspect of the trip because he was able to fully immerse himself in the culture. “I always liked traveling, meeting new people, and serving others, and this combined all of those aspects,” Ben said.

Ben’s experiences with service––attending mission trips, volunteering with his church, and spending time at the American Cancer Society Hope Lodge last year––have prompted him to want to help others even more in the future. Next year, Ben will go to Elon University in North Carolina and hopes to study business or entrepreneurship. “It would be fun to see myself in a business but not just a business focused on a product or a service, but [that has]some sort of cause or reason to help be a part of it…some sort of goal of giving back,” Ben said.

Over the summer Ben will get a head start on volunteering and experiencing college by going on a first-year summer experience with other students from Elon University. “We will go down and volunteer around in the town by Elon,” Ben said.

Throughout high school, Ben has been involved in Alpine ski team and trap shooting, as well as Link Crew, Peer ministry, and RKVC. Ben’s favorite class at BSM was Morality because it allowed him to hear someone else’s perspective and beliefs.

Skiing has held a special place in Ben’s life since first grade. He originally started skiing because of the competi- tion, but over time he started to enjoy the social aspect of skiing more. The chair lift and the practices gave Ben a chance to talk to every person on the ski team. He has been on Alpine since he came to BSM in the eighth grade and was appointed one of the captains for the 2015-2016 season. “[Being captain] has been a goal of mine. I have seen the captains and looked up to them since the seventh grade and now I get to be one of them,” Ben said.

When Ben was in the eighth grade he came to BSM after going to Groves Academy in St. Louis Park from third to seventh grade. At Groves Academy, he had the opportunity to listen to Vince Flynn, a Minnesota author, speak to students at Groves. Ben and Flynn both have Dyslexia and whenever Ben heard Flynn speak about his Dyslexia, he felt inspired by Flynn’s hard work and his ability to overcome challenges. “It was really cool to hear from another person with dyslexia that even though you have to try super hard that in trying hard it gives you tools for success. That was a big motivation for me,” Ben said.

After being a Red Knight for the last five years, Ben understands how unique and caring the BSM community is and how it will be hard to find any other atmosphere like it. Ben recommends that any underclassmen try to participate in the community as much as possible by joining different activities and going to sporting events as a way to meet new people and make lasting memories. “[Next year I will miss] the football games and the events; the atmosphere [of BSM] is a lot of fun,” Ben said.