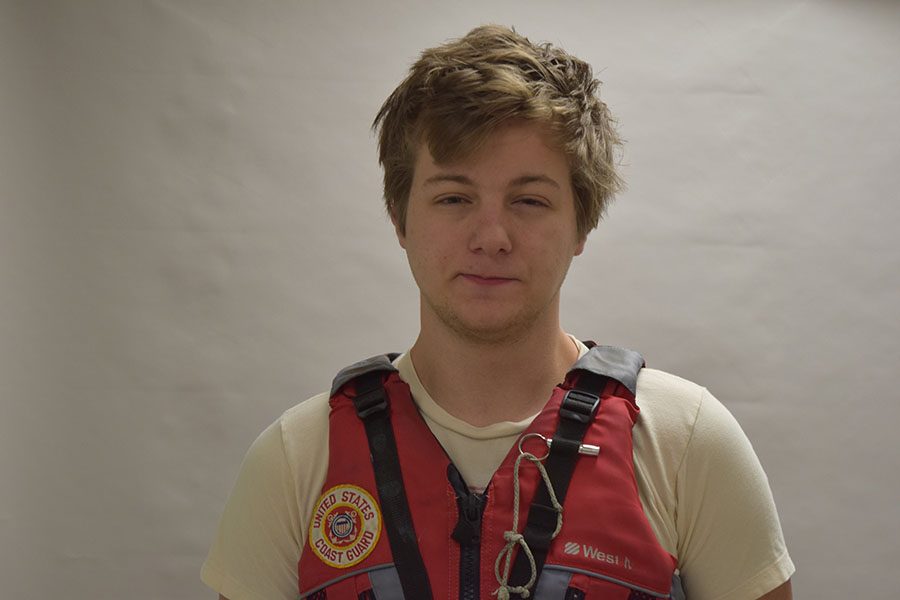 “Jack is in all the best ways unhurried with his thinking or with his communication so that whenever he is talking about something to you or presenting it represents something unique and insightful; it’s a creation of something instead of just the first look or thought or average interpretation. He’s got a great brain. He’s also ridiculously kind and respectful and he’s a gentle soul.” -Anna Overbo

Gentle, wise, an outdoorsman, filled with seemingly endless knowledge about mechanics: all tell-tale trademarks of Jack Meshbesher. Jack is the quiet and mindful person you search for as a lifelong friend, the type of friend who you feel confident would cover you with a blanket if you fell asleep in an inconvenient place. He would be your first choice for a companion to venture into the woods with you.

This understated, calculating, enjoyable individual is working out blueprints for his life already, imagining with a new eye and quiet understanding. “[I enjoy] just figuring out how the world works, and how I can improve upon it,” Jack said.

+ Jack is not a fan of the guacamole from Chipotle.

+ He has ripped his pants while working on set construction for the BSM drama department and simply stapled up the destroyed inseam and went to class.

+ Jack cannot do a handstand, but if given an ax he could chop down any tree for a bonfire. This is his only party trick.

Jack’s most prominent passions are engineering and sailing, which he wants to continue devoting time to as an adult. Jack’s aspirations are heavily influenced by Elon Musk, a remarkably achieved pioneer of engineering. “Because he’s done so well in the past financially, he does whatever he wants. As a child, he was super fascinated by rockets, and now he founded SpaceX. He also liked the concept of an electric car, and he made [Tesla]. So I like him because he’s a brilliant engineer, and because he has the resources––he can do whatever he pleases, and follows what he’d like to do,” Jack said.

Using the resources available to him, Jack has actually constructed a small house for himself––from scratch. Jack uses his homebuilt, insulated, drywalled, naturally and electrically lit space as a workshop for whatever engineering project strikes his fancy.

At some point in his life, he’d like to utilize his knowledge and talent at sailing to travel around the globe. “I wish I could do one lap. I’d probably go the Atlantic first: start in Florida, sail up the coast to New York, cut across, probably stop, go to Iceland, Greenland, go down to the United Kingdom, and take a Europe trip. That would be pretty cool. Go around Asia and all that. I’ve always wanted to visit Vietnam, I don’t know why,” Jack said.

Jack is well on his way to accomplishing all of his dreams. His hard work and dedication have facilitated his interest in creating and exploring––basically, whatever he wants to do. “The meaning of life, in my opinion, is being able to do the things that you dreamed about when you were a child,” Jack said.

And Jack is planning those dreams in his thoughtful way, preparing for the upcoming highlights in life. “I think I have a lot to do in the future. I want to be a successful person; I have a lot of things that I want to do and I haven’t gotten to do all of them. I expect to peak a couple years out of college, when I have my degrees and I start my business. Once I get my life situated, and I get my life sorted out,” Jack said.

Next year, the halls of BSM will miss this creator’s  purposeful, understated manner. Jack will be studying engineering at the University of Saint Thomas in hopes of graduating with a mechanical engineering degree (fan club mail may be directed to the school). “Mostly, I’m going to miss the teachers [at BSM]. Some of them are super cool––I want to say a shoutout to Mr. Backen and Ms. Overbo for being awesome teachers, same thing with Mr. Pauly. The thing I’m going to miss most about Benilde is the quality of the persons of the teachers,” Jack said.