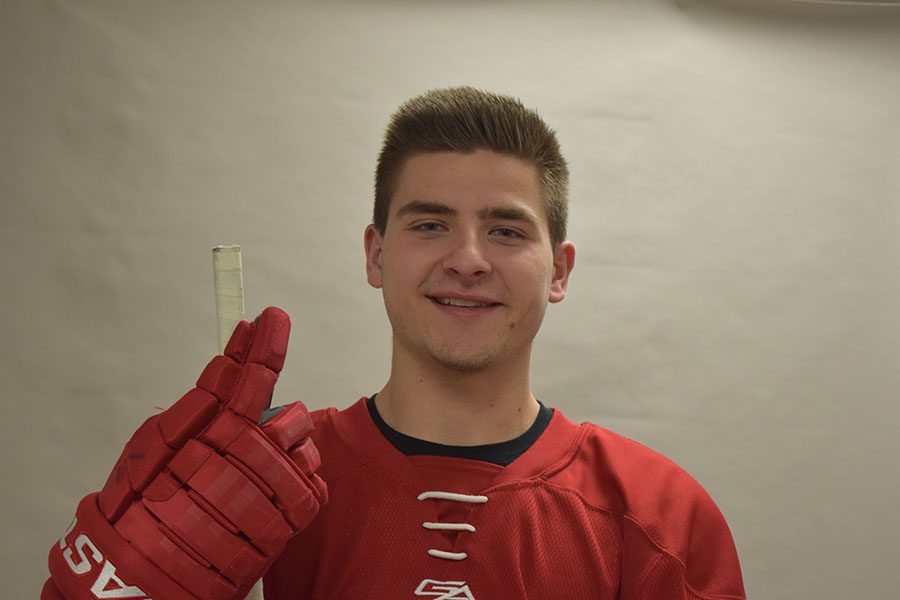 Dan Myhra believes that people’s first impression of him is that he is “a bit intimidating, or serious or down to business,” but there’s more to him than meets the eye. He carries thirteen years of hockey experience, an enjoyable drawing career, and a strong faith life.

Throughout Dan’s high school experience, he has maintained a vibrant religious life that he attributes to his parents and BSM’s emphasis on God. “Going to Mass every Sunday and going to a theology class regularly, you know, five days a week, that’s when I sort of took my blinders off and opened my mind and heart to religion,” Dan said. Dan represents his openness to God with a large cross tattooed onto his chest. “I like to put all of my trust into God and use him as a foundation for keeping my level-headedness; God has a plan for me, and he has a plan for all of us. When the going gets tough, the tough get going. I never like to lose the faith,” Dan said.

+ Next year, Dan’s going to miss “the faculty. Maybe my friends, but definitely the teachers.”

This trust and devotion to religion is also manifest in some of Dan’s art he produced during Drawing I. “First semester, when I was in Art and Design, I found I really enjoyed drawing, and I was pretty good at it. From then on I would just draw things I was passionate about. I would draw religious stuff like crosses and the sacred heart of Jesus,” Dan said. Unfortunately, Dan’s time on the ice mandated he give up his incredible drawing. “When hockey was getting more serious I was starting to have trouble fitting an art credit into my schedule,” Dan said.

Dan began playing hockey at a young age, taking after his dad and brother. “My dad was a big time hockey player, my brother played, so obviously, I’d be disappointing my family name if I didn’t play. As the years went on that was just something that I did and as more years went on it was something that I’d love to do,” Dan said.

In college, Dan wants to focus on his education rather than his hockey career. “It would be a great opportunity to get to know people, but I’m going to college to go to college,” Dan said.

Taking these passions and interests to heart, Dan plans on studying engineering in college at the University of Iowa. “I haven’t really decided which area of engineering I want to go into but yeah looking towards engineering so, physics and math will definitely all fit into it,” Dan said.

Dan credits his passion and drive to his father, who is a former Marine officer. “When I was like four or five, he wrote up a list of rules, called ‘The Myhra Family Rules,’ and he had that centered at the top of the page and under that it said in quotations, ‘Know yourself,’ and underneath that it had eight rules. Rule number one was ‘tell the truth.’ He highlighted it in yellow and taped it onto each one of his kids’ doors. That just embodies the kind of dad that he was, ‘tell the truth.’ I still have it on my door to this day, fourteen years. He always handles tough situations very level headed, and with great integrity. He’s always trying to teach his children life lessons through,not only his experiences, but also helping us see what we can learn from our own experiences,” Dan said.

It is clear why Dan Myhra is one of the tremendous twelve.