It was the first day of the new year. I was in the middle of baking a cake, already in violation of my resolution to eat fewer sweets. My mom was in the dining room pretending to be busy. She had decided to work from home that day, a choice she later chalked up to chance, but I chalked up to psychic powers. However, the truth is that no one could have predicted what would happen that fateful January day.

I had just poured the cake batter into a thoroughly greased pan when I heard my mom shout, “Excuse me! This is not your house! You need to leave immediately!” It needs to be stated that my house is a hotspot for paranormal activity, so my mind immediately jumped to the conclusion that my mom must be confronting some sort of spirit. However, when I peeked my head around the corner I did not see a ball of energy, or a wisp of white light I saw a stranger in the middle our house.

My mom’s voice was stern and collected.  “Gunnar, call 911 right now” she said. I was still in shock, and it took a moment to process her words, and even longer to will my body into motion. My older brother grabbed the man’s arm and proceeded to drag him towards the door. “Don’t grab me! Don’t push me!” The man’s speech was slow and slurred, it became clear that he was intoxicated.

My train of thought was once again broken, this time by a voice on the phone. “911 what’s your emergency?” I was at a loss for words and not really sure how to describe the situation. I finally managed to fumble some words out of my mouth, “Err..umm…there’s a person…” My mother gave me that look of sheer disappointment and annoyance, the one usually reserved for spilling food on the couch. I immediately decided that the best course of action was to throw the phone at my mom and have her talk. By this time, my brother had managed to lead the drunk man out of house and was gently shoving him through the doorway.

“Yes, we just had a home invasion. We were able to lead the man out of our house, but he is currently outside. He wreaked of alcohol and seemed very disoriented.” My mom sounded so smooth on the phone; I was thoroughly impressed. However, my compliments towards her were drowned out by criticisms due to my incompetence. Luckily for me my Veronica Mars instincts finally kicked in, and I knew exactly what she would’ve done. I quickly grabbed my phone and snapped some stalker-esque photos of the man through our window at this point he had walked up to our neighbor’s door.

All was relatively calm for the next thirty to forty minutes, until we got a call back from the precinct. As it turns out, the man was apprehended a block away, and did indeed have a warrant out for his arrest. However, the policeman would not tell us what the warrant was for, and we could only speculate the criminal history of our mysterious visitor. The rest of the day was uneventful in comparison, save the few instances of my friends entering unannounced and scaring my mom half to death. In fact, the excitement didn’t really pick up until dinner time.

Luckily for me my Veronica Mars instincts finally kicked in, and I quickly grabbed my phone and snapped some stalker-esque photos of the man through our window”

In the midst of our table talk, we were interrupted by the doorbell ringing. I dispatched one of my friends to answer the door, per usual. “I don’t know the person at the door! Hello? Will someone come answer the door! I don’t live here! This isn’t my job!” Her pleas for help went unanswered until the doorbell rang a second time. When it became apparent that no one in the family knew who the man was, my mom opened the heavy wooden door about a quarter of an inch and asked the million dollar question, “Can I help you?” The man cleared his throat and answered, “Yeah, someone dropped my buddy Ray off here earlier. Is he inside?”

My family shared a perplexed expression and my mother answered, “No, there’s no one here except the people that live here.” He appeared confused, and after checking something in his pocket he asked, “Isn’t this the group home?” Suddenly it had all become clear. The man that had been dropped off earlier, apparently named Ray, was searching for a group home, and had walked into to our house under the impression that he had arrived.

My mom quickly refuted any claim that this was a group home, and told that man that this was indeed, just a family home. We then quickly shut the door, because no one had the heart to tell this man that not only was his friend not here, but we had actually got him arrested and he was now in police custody. After regathering around the table my mom aptly decided to add another New Year’s Resolution to all of our lists keep the door locked at all times. 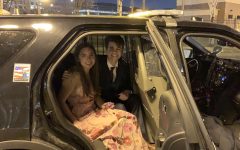 Leaving in a Police Car: A Unique Prom Experience 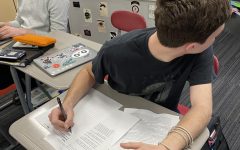 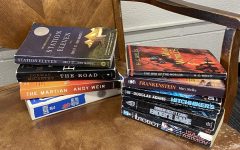 A Satirical Guide to English Electives at BSM 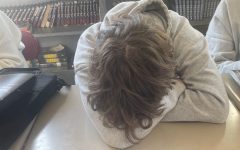 Seniors are in their full slide mode 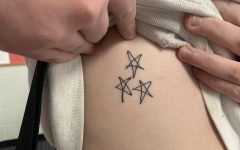