Do mission trips do more harm than good?

BSM provides the opportunity to many students to go on a mission trip. In recent years, the destination of choice has often been Honduras. But do these trips really benefit the people who are meant to be served?

The summer after freshman year, I was fortunate enough to attend a mission trip to Honduras through BSM. I was elated to be able to immerse myself in the culture and see the change I could make in the world. Through the trip I grew closer to my fellow Red Knights. Once I returned, I immediately logged onto Facebook to see the albums posted by my newfound best friends. Instead I found an article titled “Why you shouldn’t participate in Voluntourism” and this made me  realize how my privilege and ignorance had blinded me on the trip into believing I was saving the children I met and that I was the greatest thing since sliced bread. When in all reality, I just inflated my ego and continued the white messiah stereotype.

Yes, mission trips allow students to explore service and give time to a cause they are very passionate about. However, three half days of service is barely enough time to meet those you serve, let alone make a major difference. In my time in Honduras, I spent less than 10 hours doing service before I was whisked away into the tourism part of the trip that rewarded us for the incredible work we thought we had done. The hours of service did enlighten me to a new lifestyle, but I had barely adjusted to the hour time change before I was relaxing on a beach.

Furthermore, mission trips are expensive. In all, the mission trip I attended cost roughly $15,000, including plane tickets, bus fees, personal security, hotel rooms and minimal supplies for service like paint. If this money were to be donated instead, the amount of aid or labor that could be paid for would be exponentially greater than the simple labor of painting fences posts and interacting with children my feeble arms could do in under 10 hours.

Many people in support of mission trips argue that it is the experience of helping others that is the reason for the trips. I, however, believe that since just as desperate poverty exists in our backyard, we should focus on that first before forking over thousands of dollars for a day of service and week of pleasure.

Also, leaving the US and traveling to a third world country only furthers the white messiah complex. Basically, by going out into poverty plagued areas, many upper middle class teens experience few hours actually filled service but return with stories of how “changed” they are and multiple social media posts.

Overall, mission trips are a good idea, but the way in which mine was executed lacked the experience I desired because of the brief time period of service, my privilege, and was an ineffective trip in a cost sense. Of course not all mission trips are bad, and the experience I had wasn’t unenjoyable, but I firmly believe that I not only could have done more, but was essentially useless to the people in the children’s home and Honduras.

While just sending money may seem like the easiest way to make a difference for those in poverty or compromising situations, I believe that donating time and service is the most important part about helping those in need. On the mission trip I went on this past summer to Guatemala through BSM, I felt like my actions made the biggest difference for those receiving our help, rather than our donations.

On my mission trip, I worked alongside many other students from BSM building houses for the homeless in Guatemala. We didn’t send money in hopes that other people would build them, we built them ourselves.

Along with using our time and effort to help these people, we were able to establish real connections with the people we were helping. This allowed a much more personal feel to the whole project as we were working side by side with those we were building the house for, including the kids of the families.

Personally, I think the best part of the entire trip was the children at my work site and their hilarious energy and spunk. They thought it was the best thing ever to paint a house bright blue––the signature of the organization we worked with, The God’s Child Project ––but it was when they started painting us that the real fun began. By the end of the day our whole group was covered in blue paint and sweat, but grinning from ear to ear because of the joy those children brought our group. 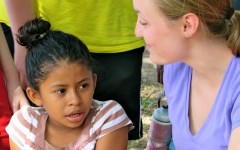 If we had just sent money to the family to help their situation, neither the kids nor us would have gotten that experience with each other, which I found very inspirational. If these kids could be in such poverty and go through awful conditions every day, but be able to maintain their spirits, hopes, and dreams, then I felt like I should be doing more with the gifts I’ve been given.

Overall I found the service to be an integral part of the trip for both myself and the family receiving our help because simply put, if we weren’t there, they wouldn’t have a house right now. But even further, just sending donations of money or supplies would have deprived all of those involved of a truly inspiring experience and a more substantial effect for the family.