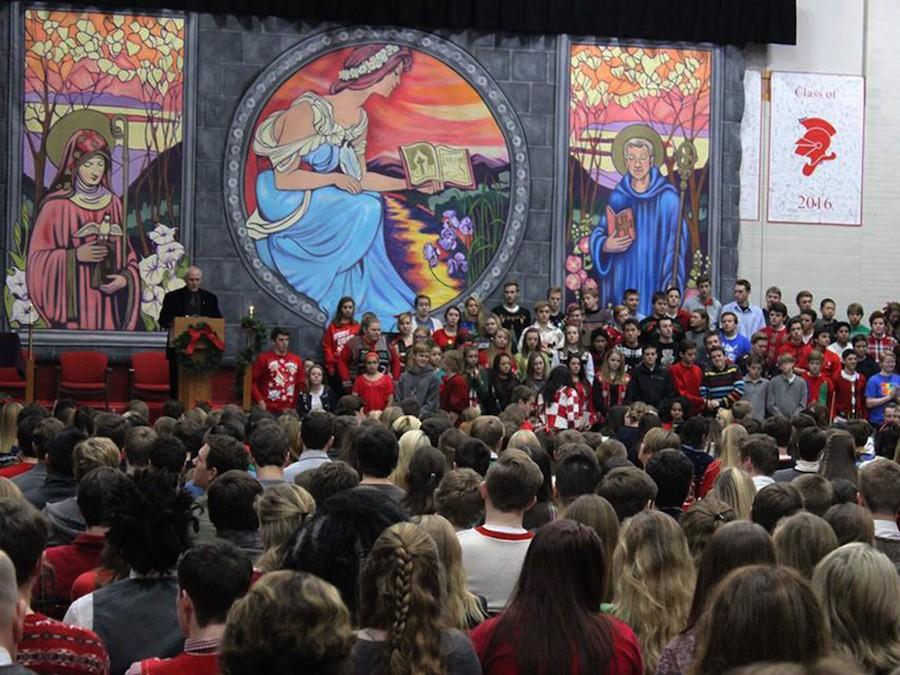 Sayer painted the mural that now hangs in the Great Hall during masses.

This fall, BSM revealed the mural of St. Benilde, St. Scholastica and St. Margaret which resides in the Great Hall during Liturgy. The mural highlights the saints BSM was instituted on and has made the Great Hall feel more like a sacred space. The artist to be thanked for this mural is BSM alum, Erin Sayer, and now famous muralist.

Her time at BSM is where Sayer first discovered that art was her calling. “When I was at BSM, Mrs. Johnson and Mrs. Jacobson were my teachers. I then worked with the Theater Department with Scott Effertz and those three helped me decide that painting is what I wanted to do,” Sayer said.

Following her graduation at BSM in 1992, Sayer began her college experience focused on her biology major. “I didn’t have any communication with BSM when I first graduated. I didn’t even pursue art, everyone was like: ‘you should go into something that makes money’ so I went into school for biology but I then switched majors,” Sayer said.

Sayer redirected her focus on her art which allowed her to develop her artistic style. Based in Minneapolis, Sayer now spends her days travelling across the country, painting murals and signs. When she’s not working on these large-scale murals, Sayer holds galleries that showcase her other paintings and works of art. Sayer recently finished working on the famous mural of Bob Dylan in Minneapolis.

Sayer first knew that murals were her calling as she began to paint scene backdrops for the Theater Department: “Once I painted a big head of James Bean for the play Grease and I realized, this is what I wanted to do, I want to paint huge paintings,” Sayer said.
To this day, Sayer maintains strong connections with BSM through the Theater Department and, most recently, the mural in the Great Hall. “I do a lot of the scene paintings for the theater and I always love coming back,” Sayer said.