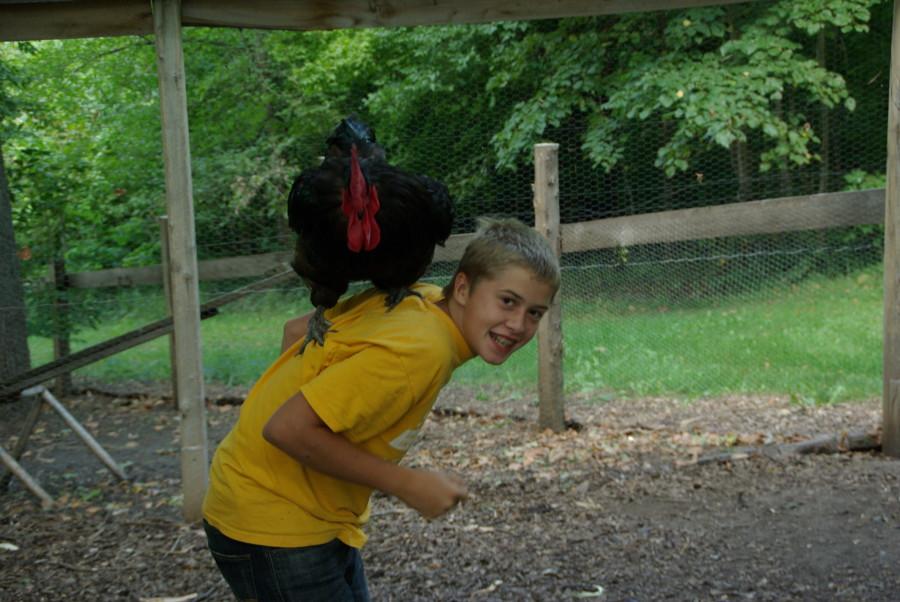 Joe Busch currently owns 20 chickens, but at one point he owned 110. Here he is pictured with one of them.

Senior, Joe Busch, is the current owner of twenty chickens but at one point Busch had one hundred and ten feathered friends. Busch is the sole owner of the chickens and this has taught him responsibility and hard work. “I have learned a ton; it has been a great time. Raising chickens is something I really recommend,” Busch said.

Busch began raising chickens when he was eleven years old when he got twenty Brahma chickens, and shortly after that Busch began to show his chickens at 4-H competitions at the Minnesota State Fair. “I have showed at the State Fair three times. I have shown both Brahmas and Rhode Island Reds,” Busch said.

At one point, one of my chickens would fly up and sit on my shoulder. It was like how a parrot sits on a pirate.”

At first, having chickens was a lot of work for Busch, but now after six years of having chickens, he is very efficient when taking care of his chickens. Each day Busch has to make sure his chickens have enough water and feed, and he also has to collect the eggs, and make sure that the chickens are comfortable and warm in their coop. “It is not much work on a daily basis if you set it up right. But for me, having 100 chickens was too much, so I have 20 now. It only takes 5 minutes a day,” Busch said.

Unlike a common pet, chickens provide unique memories that never fail to amaze anyone. “At one point, one of my chickens would fly up and sit on my shoulder. It was like how a parrot sits on a pirate” he said.