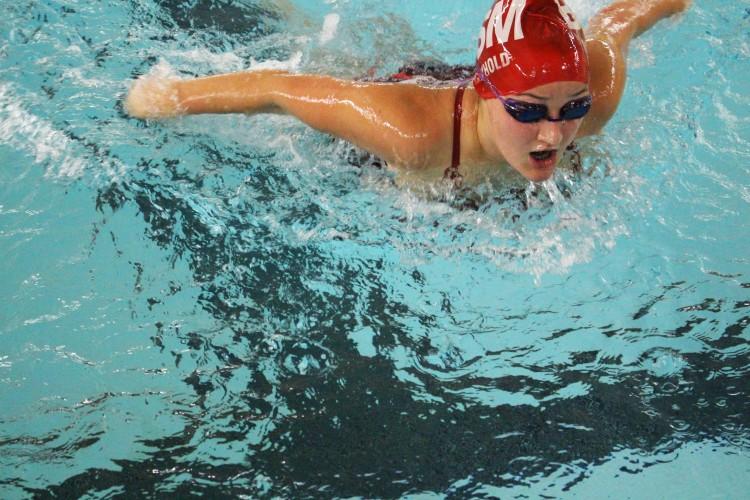 Girls swim team looks back on a successful season

As the season nears its end, the BSM girls’ swim team has much to be proud of–including an unexpected victory over the team’s long time rival, St. Louis Park, winning the meet 52-42.

This victory, while achieved for the second year in a row, was a milestone for the team, who graduated fourteen seniors the year before, while gaining thirteen seventh and eighth graders. “This season has been one of growth and identity. It was a peculiar dynamic for us to absorb [so much change] this season after so much consistency. We were swimming kind of aimlessly for the first several weeks while athletes and coaches dealt with a bit of an identity crisis,” head coach Mr. Damon Carrison said.

This change in identity has allowed for younger swimmers to support the team in ways that they did not previously have the opportunity to. “Last year, we graduated a lot of girls who were very good, but this year we have the opportunity to step up and pull the heavy weight. There have been a lot of very talented, really hardworking girls, as young as seventh grade,” senior Anna McGinn said.

Seeing Michael Phelps swim a 100 fly––he makes it look really easy. But, when you get down to it, you’re using all of your muscles, practice conditions are sometimes subpar, and in reality it’s not.”

These young, high-achieving swimmers have proven essential to the team, and have contributed greatly to its successes. “[The victory over St. Louis Park] showed the depth in our team, especially with the younger girls,” McGinn said.

One of these young girls is freshman Madison Semler. Specializing in the 500 and 200 yard freestyle events, Semler has played an instrumental role in the team’s successes. “The team is not what it was last year, after losing so many seniors, but we still have had a great season and improved since August,” Semler said.

This family extends beyond the athletes themselves, and also encompasses the coaches–head coach Damon Carrison, and assistants, Jon Weidenbacher, Sarah Chillo, and former BSM teacher, Adam Groebner. “The team would not be the same without the coaches that we have. The four of them really create a good mix of personalities–the team atmosphere is definitely instigated by Damon,” McGinn said.

Carrison and Weidenbacher, lifelong friends, were actually teammates in high school. “It has been a thorough pleasure enjoying coaching with one of my life-long best friends. We both grew up swimming competitively, and we were captains together in high school. Staying involved in the sport together through coaching has been a blast,” Carrison said.

Despite the team’s unique atmospher and successful season, there is far more to the team––and competitive swimming in general––than what meets the eye. “Most people only know swimming from the Olympics, and seeing Michael Phelps swim a 100 fly––he makes it look really easy. But, when you get down to it, you’re using all of your muscles, practice conditions are sometimes subpar, and in reality, it’s not,” McGinn said.

Often times, McGinn noted, the legitimacy of the sport is questioned, despite the challenges and long season the sport poses. “It takes a lot of skill–it’s hard to just pick up swimming without ever having swam before. It’s often seen just as a form of exercise,” she said.

In reality, swimming has one of the longest seasons out all of the high school athletics, lasting from mid-August to mid-November. “When all these other sports are wrapping up, we’re still going on,” McGinn said.

The swim team still lacks attention and popularity. “People should come to swim meets because swimming is underrated. We never have any fans,” McGinn remarked.

The morale and energy level of the team remains high as they enter the final stages of their season. “I think that we are still an improving team so we hope to come out of [the season] on top,” Semler said.

In the section meet on November 8, the Red Knights proved their dominance, sending four swimmers to the state meet. Semler, along with fellow freshman Claire Torgerson, sophomore Grace Hedin, and senior Megan Pohle, dominated the 400 yard free relay by setting a meet record with a time of 3:39.18, sending them to state. The same four girls placed third in the 200 meter free relay, earning a spot in State.