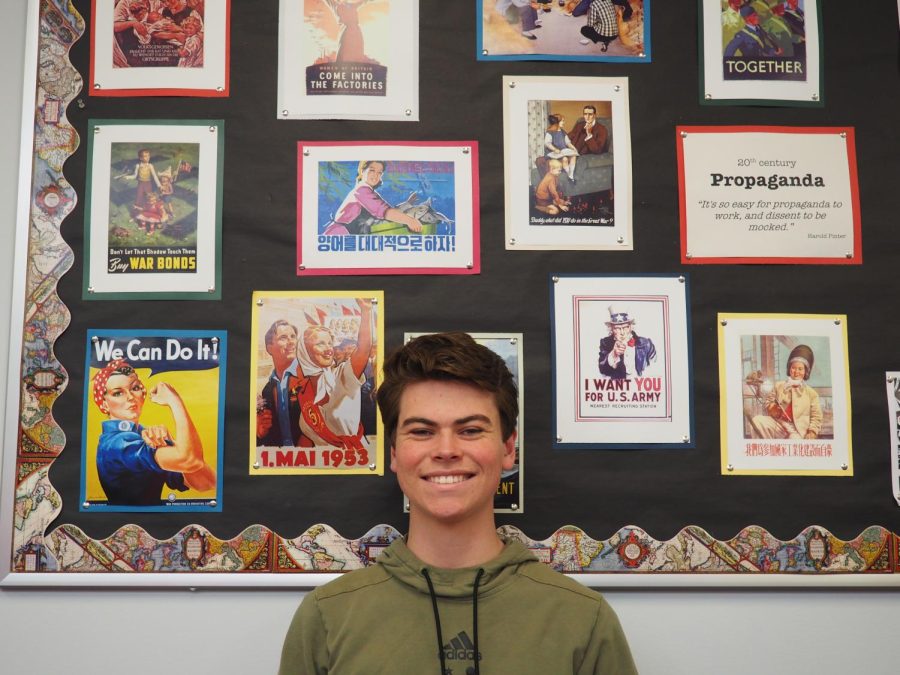 Teddy Madden came into BSM wanting to become accomplished in a wide range of activities; not only did he fulfill his wish, but he capped off his dedication at BSM with the title of Valedictorian.

Madden followed in the footsteps of his siblings who also attended BSM. The youngest of four, Teddy followed Sofie, Billy and Harry. While Teddy was the first Valedictorian, he credits his siblings with helping him choose which classes to take, and setting a high standard of work through their stints at BSM.

While maintaining a 4.0 GPA requires a lot of focus both inside and outside of the school day, that didn’t limit Madden in his ventures beyond school. Madden was captain of the cross country, robotics, trap shooting and ping pong teams. His leadership was proven not only on these teams, but also in clubs at BSM. He created the chess and Chinese club at BSM and was the president of the National Honor Society his senior year. Madden also took part in the Language, Math and History Honors Societies, and developed his athletic prowess in boys’ volleyball and golf. “Participating in sports helped me be a leader in the classroom also, which overall led to a much better relationship with my teachers and classmates,” Madden said.

Madden also has extracurriculars outside of school to broaden his horizons. During football season he dedicates hours a week to perfecting his fantasy football lineup. Madden also keeps himself busy working as a caddie or battling on the basketball courts of IBA or Lifetime. He likes spending his time in the summer by Bde Maka Ska Lake or playing in his summer volleyball league.

Madden finished with an unblemished record in school, but not everything was smooth sailing; he identified AP Human Geography as his hardest class. The college level grading caught him off guard at the start of the semester, but he stayed diligent and began frequently visiting his teachers and other students to help him. Science was also a common area of struggle for Madden, because it was not straightforward like he was used to. “It requires you to have a different mindset and is a difficult learning curve, especially in AP Physics,” Madden said.

Madden learned his freshman year that staying caught up on his workload made succeeding in the classroom much easier for him. “A lot of people are close to becoming a Valedictorian, but they struggled early on in Freshman or Sophomore year due to a lapse of judgment. If you stay on top of your work you don’t have to be a genius. A lot of it is just staying on top of your classes and prioritizing the classes that are hard for you,” Madden said.

Madden had no complaints with any of his teachers at BSM, and said he thoroughly enjoyed the different skills each of his teachers brought to the table. One teacher that stuck out for Madden as his favorite was his AP Human Geography teacher Cherie Vroman. Madden credits Vroman for setting him up for success in high school with the skills she taught him, and for helping him get through a rigorous class even after having a slow start. Vroman identified Madden’s positive attitude as the most noticeable trait of having Madden in class, and said it was a joy having him in class. “Teddy’s enthusiasm for learning new things and his curiosity was evident every day when he came to class. He had an incredible work ethic and always came to class prepared to fully participate in whatever task was at hand,” Vroman said.

Another BSM staff member that mentored Madden was his cross country team coach, Coach Snell. He credits Snell for making cross country a unique experience, and helping him become a better person. “Cross country wasn’t only the sport, it was more the brotherhood of the team. A lot of what I’ve done leadership wise and in school is inspired by him, and he led us in taking the next step in relationships,” Madden said.

Madden suggests taking harder classes, because not only is it important for your learning but it helped him with getting into his colleges too. Madden is committed to furthering his education at University of Notre Dame and wants to pursue either engineering or business.