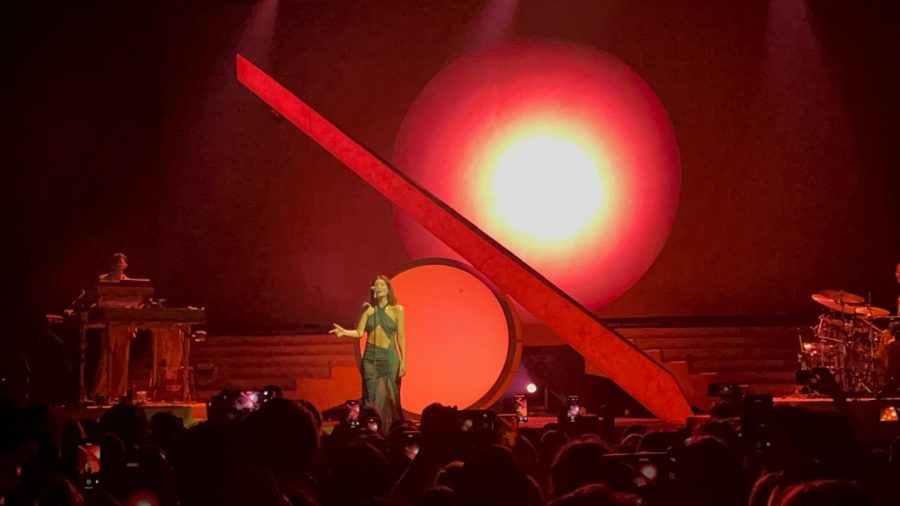 Lorde performs at The Armory during the encore of her Minneapolis show.

Lorde has returned. After being off the grid since 2017, Ella Yelich-O’Connor, AKA Lorde, has come back to perform Solar Power, her album released on August 20, 2021.

The concert, held at the Armory in downtown Minneapolis, welcomed thousands of people in a 8,400 capacity venue. Towards the middle of the concert, Lorde took a brief pause in her set to tell the crowd that typically during this point, she will express how much she loves performing at small venues because of the intimacy between her and fans. But the Minneapolis concert was far different from previous shows; it was the first general admission event on the tour, with over 7,000 people who came together to celebrate Lorde. She capped this conversation by jokingly telling the audience she loves coming to Minneapolis because of how pedestrian-friendly it is.

The concert consisted of three acts with a total of 21 songs performed. Act One consisted of five songs, and Acts Two and Three were seven songs each. An additional encore of two songs, Royals and Team, finished out the show. Lorde performed songs from all three of her albums, “Pure Heroine,” “Melodrama,” and “Solar Power,” shuffling the song order to get a mix of older and newer songs. Before some of her songs, such as Liability and Ribs, she explained the writing process of the song and what it meant to her. Lorde even did something she’s never done before: letting fans vote for what song they’d rather hear. Fans could choose between The Louvre or Hard Feelings by cheering for what song they wanted – and The Louvre prevailed. The 21 total songs carried a variety of different moods, beats, and stories – arguably the perfect mix.

With each act, came a new outfit that Lorde amazed the crowd with. The first being an effortless combination of a shimmery top with a loose, white button-down, perfectly paired with the tranquility of Leader of a New Regime and Fallen Fruit. For the second act, Lorde came out in a light purple dress, sticking to the warm colors of the album and the stage backdrop. Then came what seemed to be her favorite, a silk, pink two-piece set. Accompanied by the act three songs like Mood Ring, Supercut, and Perfect Places, she was able to dance and be just as excited as the crowd was. Last but not least, Lorde did a quick outfit change for the encore (Royals and Team). This was a dark green dress that was a perfect way to end the night. While the outfits did stick with fans, the stage has been a large part of her tour. Meant to represent the sunny vibe of “Solar Power” as well as her growth as a person, the bright lights and rotating center kept every audience member hooked.

Lorde’s interaction with her fans is a notable take away from the concert. She frequently stopped to make sure that everyone in the large crowd was feeling okay, ensuring that fans who needed water were getting it. One of the most memorable moments for many attendees was right before Lorde sang Liability – one of her most vulnerable songs. She sat down on the set stairs and had a conversation with the fans, thanking them for waiting in the cold and expressing her gratitude and disbelief for her fans’ support. She also revealed that though she typically tends to release music, go on tour, then disappear for a few years, the feeling that she had while on tour makes her want to stop retreating from the public eye. Furthermore, Lorde told everyone in the crowd that no matter what, she believes in them, so she had everyone in the audience scream, “Ella believes in me!” not once, but twice.