The Second Season of Netflix’s “Bridgerton” Outshines Season One 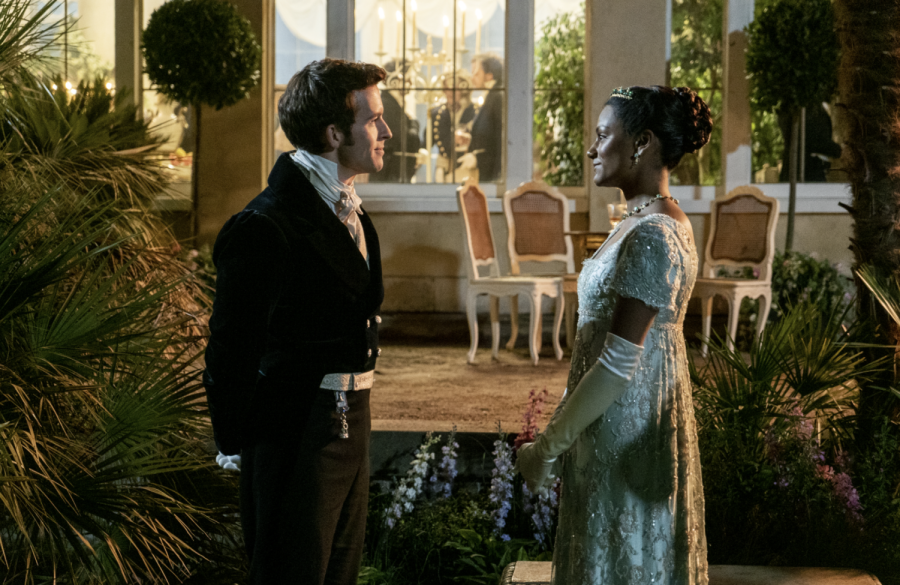 The main characters of Bridgerton's Season 2, Anthony Bridgerton and Kate Sharma, meet outside during a party.

On March 25th, the second season of Netflix’s Bridgerton was released. A follow-up to the courtship of Daphne Bridgerton and the Duke of Hastings, this season follows the courting season of eldest brother Anthony Bridgerton, inspired by Julia Quinn’s book The Viscount Who Loved Me.

Bridgerton’s first season was a look inside the courting season of 19th-century London, following the most important families in society as they strove to find the most suitable spouse for their children. Season one focuses on the fourth of the eight Bridgerton children, Daphne. The eldest daughter in her family, Daphne is named the season’s “diamond” by the queen, and goes through her courting season and ends up marrying the Duke of Hastings. Throughout the season, a gossip column emerges, called Lady Whistledown. Lady Whistledown’s column gives all the juicy details of the courtship season, with lots of inside information on many of the elite families in society. No one knows who Lady Whistledown is, but everyone knows one thing: she causes only trouble.

The second season follows Anthony’s search for a suitable wife to make his viscountess. The hot-tempered viscount searches through many eligible ladies before his attention is drawn to Miss Edwina Sharma, a young lady from India who was named the season’s diamond. Edwina traveled to London with her mom and her older sister, Kate, for the courting season. Tensions between Kate and Anthony arise because Kate deems Anthony unsuitable to marry Edwina. These tensions eventually turn to something more throughout the course of their courtship and eventual engagement, and Anthony begins to stray from Edwina because of his undeniable attraction to Kate. Love triangles emerge, gossip spreads, and, of course, Lady Whistledown reports on it all.

I absolutely loved this season. I definitely enjoyed the second season more than the first one, and I loved getting to follow the love journey of a different Bridgerton sibling. Just as the first season, the characters were likable, the plotline was easy to follow, and all the elements in the show embodied the aspects of the time period.

One element of this season that I really liked was the incorporation of Indian culture. Edwina’s nickname for Kate is “Didi,” which means elder sister in Hindi. At Edwina’s wedding, Kate wears traditional Indian bangles which symbolize a prosperous marriage. There is also a hair oiling scene, because hair oiling is important in Indian culture. I’m really glad that Netflix chose to incorporate all of these beautiful elements, because I think it really deepened the season overall.

I also really enjoyed getting to follow Anthony’s love story. I honestly expected the second season to be a continuation of Daphne and the Duke’s marriage, but I’m really glad that we got an entire season on just Anthony. His personality is so different from Daphne’s, and his role as the family viscount makes for some unique aspects of his life and courting season. This was also Eloise’s (the fifth Bridgerton child) debut into society, and I loved getting to see her spunky attitude as she dealt with the chaos of the courting season.

I would recommend this season to anyone who watched Bridgerton’s first season. I loved all the love triangles, cultural appreciation, and of course, lots of Lady Whistledown drama. In my opinion, the second season outshone the first season, so I promise that you won’t be disappointed. As for who Anthony ends up with…you’ll just have to watch to find out!