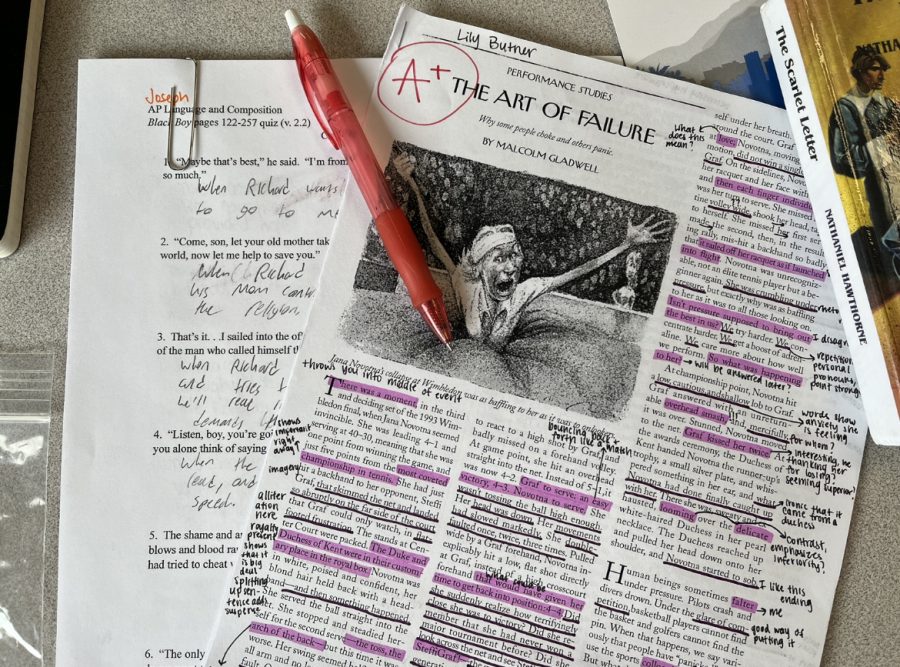 BSM aims to reform their grading system to make it the most beneficial for students.

As BSM’s curriculums, schedules, and teaching styles evolve, so does the advancement of the grading system. The grading system shapes a student’s transcript, and BSM aims to reform this system to make it the most reflective of students’ capabilities.

One relatively modern type of grading that has been implemented in the BSM’s science department is standards-based grading. Instead of trying to combine all of the skills assessed in certain biomedical science classes into a single letter grade, science teacher Mark Peterson grades on a scale with multiple levels with different grades pertaining to the student’s proficiency in each area. However, he calls it standards-based learning rather than grading in an effort to help the students focus on their learning process instead of solely the final grade.

“My experience – and I’ve been a teacher for like 175 years, is that if I hand students back a paper with a letter grade on it, they’ll look at the letter grade and that’s all they care [about]. But if I give them feedback without a letter grade, and the feedback is there to help them get better and improve on what they know or what they can do, and that feedback is actionable, in other words, it can help them see where they need to improve, that students will do something with that, rather than just taking the paper and throw it away,” Peterson said.

Peterson sees standards-based learning as an important step towards omitting the negative connotations and emotional tolls associated with grading. “And so, [when] we think of letter grades – letter grades come with a huge emotional attachment to write, and even pluses and minuses… come with like, ‘Oh man I got a B plus, I got an A minus’, with the idea of standards based learning and that philosophy, there is a description that separates between those levels,” Peterson said.

Though a large part of BSM’s science department is moving towards a standards-based learning system, Senior High Principal Stephanie Nitchals has decided that BSM will not be implementing this system across the whole school. However, she plans to take certain elements of standards-based learning, such as identifying the students’ learning targets, and apply that to BSM’s future grading system.

“There are some parts of [standards-based learning] that are really good, like learning targets, and being really clear with students on what the expectations are to receive each score, but the school won’t be going to a one-to-four scale or anything like that. We’ll still have an A to F grade scale, but there’s some things that we can take from that process and use going forward,” Nitchals said.

While standards-based learning affects mostly students in the science department, one aspect of the grading system that affects many students is the proposal of weighted grades. BSM currently grades on a 4.0 GPA scale, with all As earning you a 4.0, no matter the class. This GPA then determines the valedictorians that are announced at graduation, with all valedictorians needing a 4.0 GPA to be recognized. But because of the many honors and AP classes offered at BSM, some feel that the grading system should be switched to a weighted scale.

Students taking base level classes often don’t have as rigorous of a course load as students in honors or AP classes, and taking these challenging classes could cause a student’s GPA to drop solely because of the class rigor. “Without a weighted GPA system, those in base level classes often end up with a higher GPA than those in honors and AP classes,” sophomore Michael McDonald said in an email interview.

Spanish teacher Mary Murray has experience with students’ GPAs being affected by the lack of a weighted grading scale. Her daughter graduated from BSM two years ago, and was enrolled in several AP and honors classes. Because these rigorous classes had higher expectations than an average base-level class, she received an A-, which negatively affected her GPA. Murray believes that this A- should be the equivalent of an A, due to the intensity of AP and honors classes.

“For example, let’s say Student A and Student B. Student A is taking all APs and honors courses [and] getting As but maybe an A minus every once in a while, right? Whereas Student B is taking all the basic courses, right, and getting all As in everything. So does that mean that student A or B… B deserves to be a valedictorian over student A, who took the hardest route but got an A minus once,” Murray said.

However, some feel that a switch to weighted grades could be for the worse. BSM junior Lance Hoover dislikes the idea of implementing a weighted grading system due to BSM being an already competitive college prep school. “I do not think [weighting grades] would be good for the atmosphere that Benilde already has,” Hoover said.

Furthermore, without weighting grades and grade distinctions, there is typically a large number of valedictorians recognized each year at graduation. BSM’s valedictorian numbers tend to be in the double digits, which looks suspicious when considering BSM’s rigor of classes. Murray feels that this could be resolved with the combination of weighted grades and class ranking. “I also think that ranking should take place because you know, like I said, I’ve been here [at BSM] 15 years [and] it’s – it’s weird. I’ve never been at a school where there’s, like, 15 valedictorians on the stage and it looks weird,” Murray said.

Expectations of students and their grades go hand in hand with the expectations surrounding students regarding college applications and acceptances. This pressure is put on not only students, but teachers as well, and many teachers feel that they are pressured to inflate grades, mostly to raise students’ GPAs and increase their chances of getting into a selective college. Across the country, certain colleges are identified as a ‘good school’, and because of this stereotype, students are pressured to go to a school with this title.

“…What I think has made the traditional grading wonky of late is a little bit of the pressure to inflate grades because of what colleges expect of students, with sort of extraordinary GPAs or perfect GPAs,” Dominguez said.

Murray proposes that there should be more of a reevaluation considering what an A grade entails versus a lower grade. Both Murray and Dominguez feel that many students consider an A grade to be average, when a C is really an average grade. “I think a lot of people – everybody thinks they are an A student, but I don’t know if that’s really the truth,” Murray said.

However, this decline of rigor in school hasn’t been seen solely at BSM. Many people feel that the difficulty of classes compared to a few decades ago versus now has declined all over America. Murray, who has taught at BSM for 15 years, has seen this decline firsthand. “I think that you know, the rigor, the amount of rigor that we’ve seen with grading has gone down in the last 15 years since I’ve been here, but I don’t think it’s just BSM. I think it really is an issue with the American education system in general, in my opinion,” Murray said.

One issue, seen both throughout BSM and across the country, is the students feeling as though grades do not accurately reflect where they are at in their learning, and rather just measure them on tests, quizzes, and projects, instead of information understood. Peterson tries to curb this in BSM science classes with the standard-based learning that he incorporates, in an effort to truly measure student comprehension.

“Learning is a lot like [baking cookies]…I want the grade that I put in my gradebook to be at the end of learning. And not and not in the middle of learning. I mean, I can look at those cookies, but I can say they look like they’re gonna be pretty good, but I really won’t know until they’re all the way done,” Peterson said.

Despite differing opinions when it comes to future plans regarding BSM’s grading system, the motives for revamping it come from a good place. Striving to represent a student in the best way is BSM’s goal when it comes to the grading system. “I wish that BSM [would] look at ways to improve so that the student has kind of the same experience with grading…across the board,” French teacher Frederique Toft said.