The future of the vikings is filled with unlimited potential 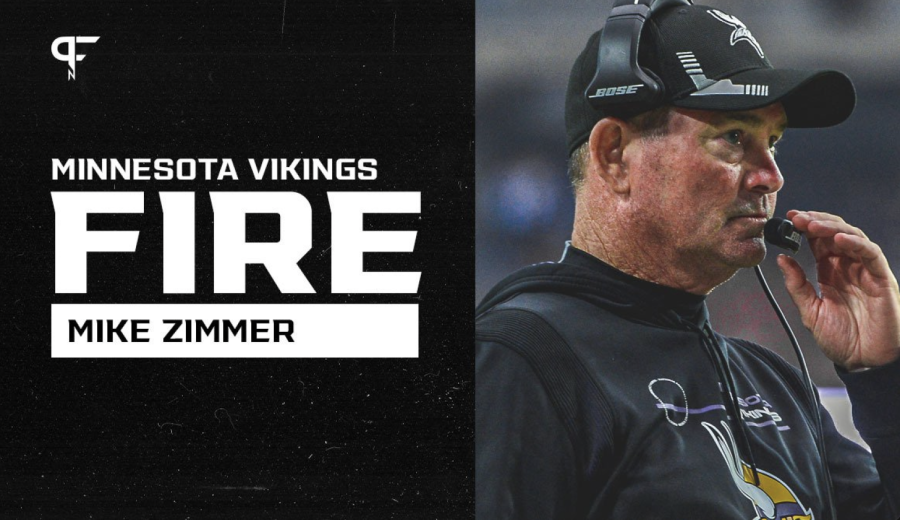 Minnesota Vikings Fire head coach Mike Zimmer, what could this mean for the team?

The lack of the vikings success in the past couple of seasons has led to Minnesota Vikings head coach Mike Zimmer being fired along with general manager Rick Spielman. This is the first time the Vikings have had a head coach opening since 2013. There are unlimited possibilities for the Vikings this offseason and fans are super excited to see what the organization will do, hoping for a major turnaround next season.

On Monday, January 10, head coach Mike Zimmer and GM Rick Spielman were fired from the Vikings organization. The organization is very confident in the team’s capabilities to win right now with stars such as: Dalvin Cook, Justin Jefferson, Harrison Smith, Eric Kendricks and more. The Vikings struggled with injuries in the 2021-2022 season, however, that does not excuse the team failing to make the playoffs. It is believed across the sporting world that the Vikings have all the talent to be a good playoff team but just haven’t been able to pull together wins. The new opening at head coach gives fans hope that whoever the team brings in will take them in a different direction and make them the playoff team everyone knows they can be. In the past few seasons, the Minnesota Vikings have struggled to maintain a consistent offense, keep a strong defense, and keep players healthy. The offense has been known for being one of the most up and down across the league putting up 35 points at times and others not being able to score touchdowns in halves at a time. The Vikings have faced key injuries such as Danielle Hunter, Anthony Barr, Michael Pierce and others causing a struggle to maintain a good pass rush and consistent secondary.

The vikings faced the former Eagles head coach in 2018 when they lost to the eagles in the NFC championship game 38-7. Pederson would go on to lead the eagles to the Superbowl with a backup quarterback where they would beat the patriots 41-33. Pederson has a coaching record of (42-37-1). Pederson could bring his ability to consistently lead a team to the playoffs and his playoff coaching experience to the Organization.

Caldwell is the former head coach of the Lions and Colts. He had a winning record in 5 of 7 seasons. He has won a Superbowl and worked with many great quarterbacks over the years. He could give a lot of experience to Kirk and the rest of the team and potentially bring them deep into the playoffs.

Eric Bieniemy is the Chiefs current offensive coordinator. He has led the Chiefs Patrick Mahomes offense to be one of the best in the league over the past few years. He has helped lead the chiefs to two Super Bowls, winning one. He has also gained a lot of experience from amazing Head Coach Andy Reid. Bieniemy has created an outstanding Chiefs offense and could potentially bring a new fire to the Minnesota Vikings offense.

There are also some less safe options for the position such as young coaches that might be a disaster but have shown great potential and could be great coaches. Who knows, that might be just what the vikings need? Some young and exciting options for the Vikings head coaching position are: Brian Flores, Kellen Moore, Josh McDaniels, and Kevin O’Connell.

Flores is the former head coach of the Dolphins who was let go around the same time as Zimmer. In three seasons Flores had a 24-25 record with the Dolphins. Flores brought up a Miami team that was not very good and created an amazing defense there. He could bring his defense talents to Minnesota which is a big need for the vikings and possibly lead them to being a great playoff team.

Moore is the offensive coordinator for the Cowboys. If hired, Moore would be the youngest HC in the NFL. He ran a great offense in Dallas leading them to the top of the charts statistically. Moore has proven himself as an OC and could be a young and exciting option for Minnesota.

McDaniels is the offensive coordinator for the Patriots. Mcdaniels has worked for Patriots HC Bill Belichick, one of the greatest coaches of our time. He has 17 years of experience and has run a solid patriots offense throughout his career.

O’Connell is the offensive coordinator for the Rams. O’Connell has worked under Sean McVay who is a great HC for the Rams. In 2017 O’Connell was Kirk Cousins quarterback coach. Since then he has run a great offense for the Rams. Reuniting Kirk and O’Connell could work out well and might be a good option for the Vikings.

Another great and possibly the best Head Coaching option is Jim Harbaugh, but it is not likely that he will come to Minnesota. Vikings fans should expect to see the organization draft offensive line, defensive line, and secondary players. Next season the Vikings can expect players such as Danielle Hunter, Irv Smith Jr, Adam Thielen, Chad Beebe, and others to return to the team. There are endless possibilities for the vikings in free agency and it will be exciting to see a new team take the field next year.