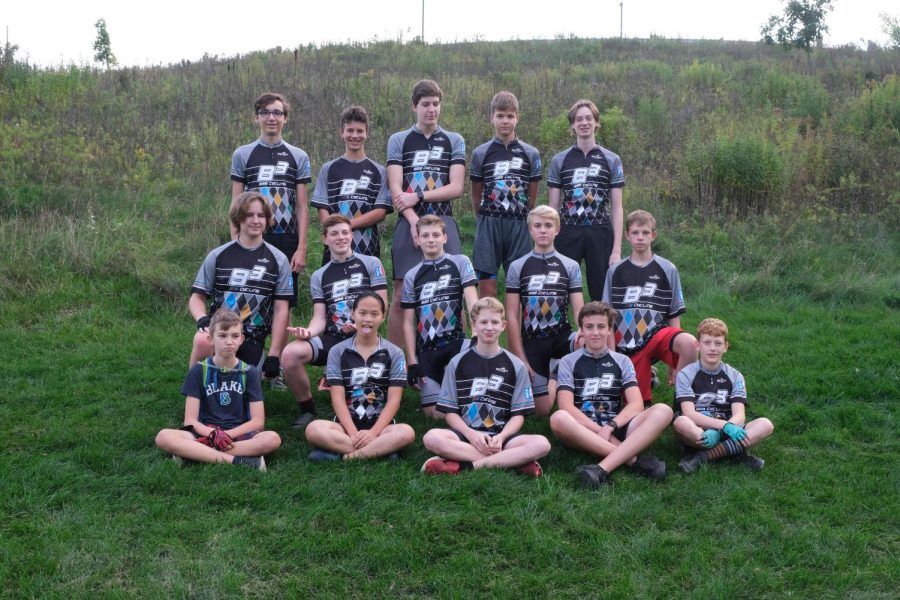 Riders from BSM, Breck, and Blake pose for a team picture.

As fall sports come to a close, the BBB Cycling Composite Team (B3) celebrates a successful season. Composed of riders from BSM, Breck, and Blake who practice with Edina, the team experienced unprecedented competitive success this year, marking the beginning of a trend that riders and coaches alike hope will continue for years to come.

Founded in 2017, B3 was created as an opportunity for student-athletes from BSM, Breck, and Blake to participate in the Minnesota High School Cycling League, a local division of the National Interscholastic Cycling Association (NICA). Around the time of the team’s formation, mountain biking experienced a surge in popularity as a high school sport. Edina’s team doubled in size from 2015 to 2019 (from 45 to 85 riders), and B3 grew from only five riders during its first year to 15 by 2019. Junior Evan Nowlin has ridden with B3 since his freshman year and has witnessed this growth firsthand. “It’s nice to see the team grow into something more than just a couple people,” Nowlin said.

Competitive success has accompanied this growth. For the first time in team history, B3 placed within the top three schools in High School Division 2 at all five races the team attended this year, including a first place result at Whitetail Ridge. B3 went on to place second in overall points throughout the season. Riders from BSM make up a large percentage of the team’s regular point-scorers, including junior Stella Ordahl, sophomore Teague Jackson, freshman Nigel Nowlin, and freshman Kellen O’Brien. Notable middle school riders include eighth grader Caden O’Brien and seventh grader Gerik Nowlin.

Part of the reason B3 has found success at races is because of how many people are involved with the team. By high school, many sports have little room for casual participants who just want to have fun playing a sport they enjoy, or competing at a level they are comfortable with. Mountain biking is unique in the sense that anybody can participate, and this is a major reason for the team’s growth and success. “Races are a super fun way of just getting out and using the skills you’ve been practicing all season… anybody can race. Like, you don’t need to be at a certain level,” Ordahl said.

Another primary difference between mountain biking and most other sports, especially in regards to competitions, is a strong sense of community. Jackson explains that although the sport can be extremely competitive, it’s unique in that people can interact with their competition in more friendly ways. “In other sports I don’t think you get to interact with your competition as much. All of the other teams are as much of your friends as [your own team],” Jackson said.

As far as the composite nature of the team is concerned, racing with people from other schools doesn’t seem to faze anyone. Making new friends and practicing with people you wouldn’t normally see during a school day provides a unique sense of community centered around a shared love of biking that can be hard to find in other sports.